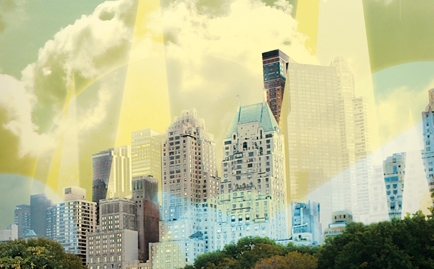 Often when we think of heaven, what comes to mind is escape. According to Medieval art and modern cartoons, “heaven” is about leaving. Heaven is about getting as far away from what we and others have broken as possible. Perhaps we think this world is too base, painful and irreparably shattered to fix, so our only hope is to leave. As such, “salvation” isn’t about a new life, a transformed character or a brilliant new experience of God. Salvation is about departure. Salvation is about “going to heaven,” being rescued from this dysfunctional world and entering a new home that is trash bag-free.

There’s nothing wrong with not wanting to suffer anymore, or wanting to be with God (which are some of the things that come to my mind when thinking of heaven). But when Jesus taught about heaven, He never spoke of it as a distant land of clouds, bath robes and harp music waiting for the souls of the dead (which sounds a bit more like hell to me). Instead, Jesus spoke of “the kingdom of heaven.” It is arguably His favorite topic. Jesus refers to this kingdom more than 100 times—more than He speaks of love, peace and money combined. Apparently, the “kingdom” aspect of heaven was vital to Jesus and His teachings.

But notice—kingdoms are power structures. They are an area of authority. As such, when He spoke of heaven, Jesus was emphasizing heaven’s present power and work. When Jesus told stories that began with similes (such as, the kingdom of heaven is like a man sowing seed in a barren field), He was showing His culture what it looked like when heaven was in control. This was what Jesus wanted His followers to know about heaven. For Jesus, heaven was primarily about God’s will being done on earth. We don’t need to leave earth, because heaven is coming here. Because “God so loved the world that he gave his one and only Son,” it makes sense that the Son’s highest concern would be repairing the world His Father loves—saturating it with the life of heaven (John 3:16, NIV).

Now and Not Yet

Jesus and the rest of the New Testament writers consistently speak in a way that suggests both that heaven—the sphere of God’s reign, presence and repairing power—is already here in a new way and that it is not yet fully here in another.

When the early Christians expressed their hope in God’s future, they pointed at the resurrection, but there was something else that was more tangible, specific and informative about God’s plans for each of them. They spoke of experiencing God’s Spirit within them and within one another. The Spirit that had once hovered over chaos and helped make the world, the Spirit they saw in Jesus—that same Spirit was now in them. It was tangible, and they felt it transforming them inside and making them more like Jesus.

As such, we should think of heaven and the age to come chasing us, meeting us, enlivening us and beginning to grow right here in our midst. It’s as though the renewal of all things has begun, and you and I are being transformed now into what we will always be.

The Sight of Heaven

If we are willing, we can choose to see heaven. We can see it in the lives of those around us who are transformed not by lucky flukes, but the Spirit of God. We can see it in the life and resurrection of Jesus, and in ourselves. We can choose to see places in our own story not as an accident, but as a real encounter with the God who is making everything new. It is a mistake to think of heaven as ever distant, unexperienced, always a step beyond our lives now. The Bible is filled with stories not of people being hurried out of here, but of God descending and drawing the world to Himself.

In the early days of creation, God descended into the Garden of Eden. During the exodus, God descended in a guiding pillar of cloud and fire. During the Jewish exile, God descended into a Babylonian fire to be with three would-be martyrs. In the Gospels, God descended in the incarnation of Jesus. At the origin of the Christian community, God descended like tongues of fire, which communicate to every nation a new reality. When Paul pictured the end of the age, he wrote again of God descending: “The Lord himself will come down from heaven, with a loud command … and the dead in Christ will rise” (1 Thessalonians 4:16). The final chapters of the Bible end with a grand culmination where heaven and earth are fully wed and God makes His home with us here. What results when our lives are united to that reality—to the reign of God and the work of His Son—is new creation. As God Himself says to close the Bible:

“‘Look! God’s dwelling place is now among the people, and he will dwell with them. They will be his people, and God himself will be with them and be their God. “He will wipe every tear from their eyes. There will be no more death” or mourning or crying or pain, for the old order of things [the present age] has passed away.’ He who was seated on the throne said, ‘I am making everything new!’” (Revelation 21:3-5)

How to Weather a Crisis of Faith

Do we choose to see our world this way? Do we choose to see heaven slowly engulfing everything and waiting for its full revelation in our midst? Our hope then is that we will continue to be transformed, that “he who began a good work in you [now] will carry it on to completion [then]” (Philippians 1:6). You and I have not yet arrived. We are not yet perfect. We are always in transit. Our lives are a work of tension—the tension between a work “begun” and a work “complete.”

But for those who experience God’s Spirit, the future is clear. We are being made more and more like Jesus who has given us His Spirit.

As such, when we choose mercy over indifference, when we choose action over apathy, when we choose self-restraint and chastity over a life given over to our many reckless desires, we choose to live now in the kingdom of heaven. When we feed the hungry, clothe the naked, heal the sick, house the homeless and die to ourselves for the sake of another, we enjoy the life of the age to come. When we hear the voice of God telling us we are loved, that our many sins are forgiven, we experience now what we will experience forever. When we eat together, laugh together, sing together, serve together, take communion, love our enemies and cancel debts, we choose to live the best kind of life—the life of God’s future connected to Him and to one another.

Of course, Jesus is central to all this. He is not simply the one announcing a new kingdom. He is the king—the Christ—and in the pantheon of potential deities, Jesus alone is doing the work of restoration. He alone has a history of making everything new. In Jesus alone do we get the sense that repair may actually become a reality. We see the defeat of evil in the events of Good Friday and Easter, for the cross and resurrection are the sign to all that there is a new king, for death could not overcome the life rising up in God’s Son.

Jeff Cook teaches philosophy at the University of Northern Colorado, and is the author of Seven: The Deadly Sins and the Beatitudes (Zondervan 2008) and the upcoming Everything New (2011). This article is excerpted from one that originally appeared in RELEVANT. To get more articles like this, you can subscribe by clicking here.

The Musical Marriage of The Civil Wars

The Power of Silence