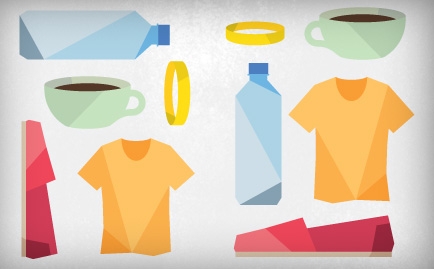 Something happened in the past 10 years—between the time college students were reading hard copies of The New York Times and when they started skimming social justice blogs, reading about new and inventive ways to do good in the world. Charity became cool.

Social enterprise—the practice of using business to support social causes—is hard to miss. It’s normal nowadays for someone’s email inbox to be inundated with messages of people giving away their birthdays for well-building projects in Africa. Nobody thinks twice about a movie star wearing a ONE T-shirt or sporting a pair of TOMS shoes in the pages of a popular fashion magazine.

However, it’s TOMS new line of eyewear that has people talking. For every pair of TOMS sunglasses sold, an individual living in poverty receives medical treatment or prescription eyeglasses to improve their vision. “Four years ago, when I realized that our One for One model could serve more needs than shoes, it struck me that it was our responsibility to do so, and a real urgency set in,” TOMS founder Blake Mycoskie says. “I started gathering a TOMS team together to find out more about sight and how to give more in a new way, responsibly.”

But the company has its critics. Some consumers find the idea less than original, the sunglasses overpriced ($135?) and the impact underwhelming. It again raises the question—is social enterprise without negative consequence?

How Social Enterprise Can Help

The good news of social enterprise—the practice of using business to support social causes—is that the economics of it work. As many once-stable economies are now struggling or even toppling, nonprofits around the world are scrambling to find sustainable means of revenue to keep going.

Enter an opportunity for globally minded entrepreneurs to make a difference. In a down economy, most people aren’t looking for reasons to give their money away; however, they do continue to buy services and still consider more existential questions such as making a difference in the world. “People want to see results of their donation or purchase,” says Wayne Elsey, founder and CEO of Nashville nonprofit Soles4Souls. “Strong, engaging strategies with the consumer will draw them to see where the difference their donation or purchase has made.”

Jamie Finch, a consultant for an anti-human trafficking organization called the Nomi Network, sees social entrepreneurship as a far more effective and sustainable business model than that of a typical nonprofit. Finch believes social enterprise is a “fantastic idea” and even alludes to the added bonus of having “built-in marketing” for the product.

Finch admits she was initially skeptical of the faddishness of social enterprise, but she eventually saw the ultimate good. “Fads come and go,” she says, “but the causes that are attached to them really do deeply affect and touch the people who are buying into the fads.” Pragmatically, she adds: “You have to fight for the attention of the general public in order to get them to look at uncomfortable things. If you can catch them with a shiny fad, they’ll be more apt to continue to listen.”

Maybe in some cases—at least in that of child trafficking—the end does justify the means. This does, however, raise a new concern: Even if the end justifies the means, will this trend last? The “bad” of social enterprise is the questionable longevity of it. Fads by definition are short-lived, so what happens when compassion is no longer cool or when T-shirts and rubber wristbands go out of style?

How Social Enterprise Can Hurt

“Compassionism,” as some have called it, is a quid pro quo service. It is the mixture of doing good while consuming goods. But at the heart of it is a consumption mentality, and one can’t help but wonder if motive shouldn’t at least play some small part in philanthropy.

There is an ugly side to this issue that goes beyond a short lifespan. What happens if this model of social enterprise is actually successful? What long-term effect might that have on philanthropy in general?

One concern is that it may hurt more than help. If we relegate our compassion to a consumption mentality, we could end up reframing philanthropy in less healthy ways, leading to a more narcissistic approach to charitable giving. Moreover, compassionism could ultimately divert necessary funds from good causes to mere products. What happens when the uninformed teenager has to choose between donating $20 to the Salvation Army and buying a T-shirt that endorses a cause? If “cool” takes the place of charity, then the cause with the greater marketing may win.

Another concern is that social enterprise doesn’t provide long-term, sustainable help. In some cases, gifts in kind can actually hurt the local economy. The overused cliché of teaching someone to fish may be applicable here. Depending on how the gifts are distributed, this type of philanthropy can propagate the “white knight” stereotype and exacerbate Western dependency instead of empowering locals.

Ultimately, there are two ways to look at this issue. One is from the perspective of the businessperson. Without a doubt, it’s a smart move on the entrepreneur’s part to tie a product to a worthy cause. It empowers the customers to tell a story, while at the same time providing an opportunity for them to legitimately help people.

The other is from the perspective of the conscientious consumer. A T-shirt, wristband or even DVD that raises awareness for an issue is great, but at some point, motive has to matter. For Christians—people whose actions are in and of themselves supposed to be acts of worship—not only does what they do matter, but also why they do it. Not to mention, there ought to be a point of maturity at which Christians don’t need to be incentivized to give, when they grasp the importance of charity for charity’s sake.

Be Conscientious and Be Wary

Social enterprise is a complicated issue that is, undoubtedly, doing a lot of good in the world. The questions of longevity and sustainability are certainly worth asking, but it’s hard to argue with the fact that in the short term, people in need are receiving help. It is, however, difficult to not be nostalgic. Being socially conscious used to be an intentional discipline. In some cases, it even made you unpopular. The issues were easy to ignore, and many chose the road less traveled. If people were concerned about global poverty, they really had to fight for their convictions. Not Bono. Not their T-shirt. Not their sunglasses. Just them. And perhaps as fads run their natural courses, those days may return soon.

In the meantime, people should consider the long-term effects of charity—being conscientious in the process and wary of potential downsides to consumer-driven compassion. At the end of the day, change is still up to each person, and whatever you do—be it buying a pair of TOMS or giving directly to a nonprofit—do something.

This article was adapted from one that appears in the premiere print issue of REJECT APATHY. You can expect more insightful social justice articles like this one when we relaunch the print and web editions of REJECT APATHY this summer. But until then, here’s a sneak preview.

Behind the Scenes of the Casey Anthony Jury