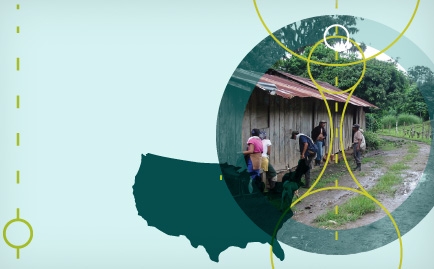 After a year of eating the same rice, beans and tortillas; sleeping in a barn; contracting malaria and fleas; and riding a dilapidated tractor for transport, you’d think we’d be happy to fly home to the United States. It’s never that simple.

Over the years, moving to and from the United States, Nicaragua, China and South Africa, we’ve seen much to love—and lament—on both sides of our nation’s borders.

Yes, “over there,” it’s as bad as it seems—the poverty, the wars, the lack of health care. What you see on the news is the real deal, somewhere. Half of the world’s population really lives on less than $2 a day. Sex trafficking, abuse, starvation—you name it—all happen, and they happen far too much.

But what you experience overseas is far from only all that.

When a person has very few financial resources, God can multiply spiritual ones. People who exist with a steady dose of danger often stop nursing fears that don’t matter. Patience and perseverance thrive. People learn to trust God even in the big stuff—when the food runs out, or authorities torch the church building or Dad dies.

The United States would never win an Olympic competition of hospitality, either. Many a traveler overseas has been blessed and awed when someone cooks their last chicken or gives the one bed in the house. Such community builds real social security. Compare that to many neighborhoods in the United States, where only rarely will a fallen tree or a blizzard draw neighbors into community reliance.

Back here, too, it’s as bad as it seems. The selfishness, the waste, the shallowness. These are still here and coming on ever faster.

And yet there’s a reason so many people around the world would love to live in the United States. We have plenty to be thankful for. Take freedom, for example. You really can live pretty much how you want to live.

Having all that freedom, and an education system that values creativity, makes a petri dish for crazy—and some wonderful—ideas. We come up with new business models, technology, causes and Lady Gaga. Ms. Gaga gets a lot of stares, but most people will fight for her right to party.

Americans are also fairly unique in wanting (and being able) to give free time and cash for a multitude of causes. We have a history of volunteerism and donating that makes possible everything from colleges, to full-time pastors to the Save the Turtle Society.

Speaking of colleges, our education system is nothing to scoff at.

And frankly, we’re funny: Jim Gaffigan, The Muppets, Community. Our informal and irreverent culture leaves lots of space for humor to spill out.

How, then, to live with the best of both worlds? One year into life back in the United States after seven years overseas, we’ve concluded: Humans stink at remaining concerned about what we do not see. Distractions and convincing logic pull our attention away from the poorest of the poor. The poor do not advertise. They do not blog. They do not pay you to go to work every day.

Community is also a hard nut to crack here. Coming back, we carried eager hopes of getting to know our neighborhood as well as in Africa. We even chose an area with small yards where we thought we would easily strike up conversations. But cars carried people into garages that ate them up without a chance to chat.

We also find ourselves spending more and accumulating stuff. It helps to stop and imagine a conversation in which we ask a good friend from Nicaragua how to spend our money. This keeps us from being overly legalistic—poor people treat themselves sometimes, too—but reminds us to spend thoughtfully. We also try to practice the ridiculous generosity we’ve experienced, like giving away a painting or offering to help pay off someone’s student loans. Whether they accept or not, it’s a reminder to not cling to what we own.

A like-minded community helps, too. Find friends who have traveled and who live differently because of it. Brainstorm ways you can give back to the places you have seen, and keep the memories fresh by talking about them.

The starry-eyed convictions that feel crystal clear on the airplane ride home quickly fade, and we can end up focused on work, family, Facebook and food like everybody else. Or we can find the same guy to bag our groceries every week and ask, “How’s your family?” We can invite over neighbors, even if they don’t reciprocate or send a check to World Vision instead of buying a $200 gaming system.

So raise the Stars ’n Stripes, and God bless Americas—both North and South—plus Africa, Europe, Australia and Asia, too.

Adam and Chrissy Jeske now live in Wisconsin. Chrissy is the author of Into the Mud (Moody). This article originally appeared in the May/June 2011 issue of RELEVANT. To read more articles like this, subscribe by clicking here.

The Jeskes have lived lots of amazing days in Nicaragua, China, South Africa, and the U.S. The latest book is This Ordinary Adventure: Settling Down Without Settling. @ChristineJeske is getting a Ph.D. in anthropology at the University of Wisconsin, and @AdamJeske leads social media for InterVarsity and the Urbana Student Missions Conference. Connect at Into the Mud and Executing Ideas.