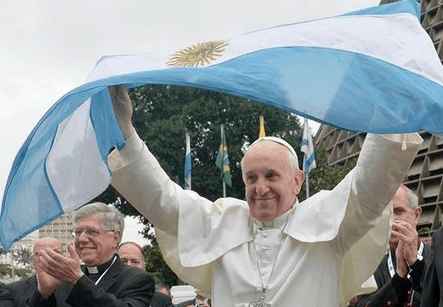 Pope Francis’ trip to Brazil has been pretty eventful. He’s managed to make international headlines for essentially ignoring security guidelines in an effort to get closer to the thousands that have gathered to see him. Yesterday (the beginning of the Catholic Church’s World Youth Day), he visited a violence-plagued slum in Rio, and today he will meet with young convicts. But beyond his event itinerary, it’s the pope’s unconventional message that’s continuing to cause a stir. During a last-minute appearance in an area where of 30,000 pilgrims from his home country of Argentina had gathered, he encouraged believers to shake up the way the traditional church delivers the Gospel:

I want to tell you something. What is it that I expect as a consequence of World Youth Day? I want a mess. We knew that in Rio there would be great disorder, but I want trouble in the dioceses! I want to see the church get closer to the people. I want to get rid of clericalism, the mundane, this closing ourselves off within ourselves, in our parishes, schools or structures. Because these need to get out!

Sufjan Stevens Thinks Very Deeply about the Use of Fonts

How to Fuel Your Passion For Change