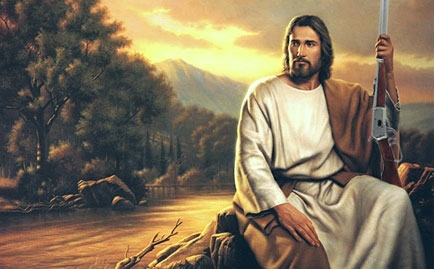 Gentle Jesus, meek and mild. It’s a distortion, but a pervasive one. Such is the power of song and poetry. It’s dangerous, however, because it is simply not true.

There were times when He chose to be meek. But He was never mild. He was born into conflict and remained in it His whole life. He jousted with the devil in the desert; He frequently exchanged words with the religious groups of the day. He risked life and reputation by spending time with housefuls of tax collectors and in the company of known prostitutes. He was not condemned to die on the cross because He was mild. He was sent there because He was wild.

Jesus was meek and wild. Are you comfortable with that paradox? It is a challenge to our normal either/or mindset. Is it possible to believe that Jesus’ life was full of both/and tensions? What does Scripture tell us?

He worked with His father as a carpenter. He fell asleep in boats during storms. He ate, He wept, He cried out in anguish as the time of His trial approached. He was moved with compassion for His friends Lazarus, Mary and Martha.

But Jesus was divine. His earthly mother Mary was impregnated by the Divine. Jesus was the Son of God. He talked to His Father constantly.

The record of His life speaks of His authority over the elements of nature. He walked on the water. He rebuked the wind and the raging waters, and they became calm.

He rose from the dead, was seen by more than 500 witnesses and extended His nail-pierced hands to the doubting disciple Thomas.

How do we reconcile His divinity and His humanity? How could they coexist? If we allow for the reality of the human/divine in the person of Jesus, what other tensions might we allow?

Jesus seemed to care little for popular opinion, warning healed people not to gossip about what had happened to them, risking the wrath of the whole city of Jericho by visiting the tax collector whom everyone hated and musing that some of the crowds following were spiritual thrill-seekers from a “wicked generation.”

This prophetic confrontation was a hallmark of Jesus’ words and deeds.

Are you ready to confront systems of thought with the challenge of the life and words of Jesus? Are you willing to express an unpopular opinion and face the anger and misrepresentation of your motives that will result? Can you live with the tension of seeking to balance that mental toughness with a gracious kind-ness to people seeking to make sense of their lives and circumstances? It is vital that you do. Impatience and a judgmental attitude are the curse of the prophet who doesn’t internalize the wisdom of the whole of Jesus’ life. Are you willing to embrace the paradox of grace and justice?

Jesus found it impossible to ignore sickness, often making His first task the healing of the sick. He healed two blind men and took the risk of touching the unclean leper as He was moved with compassion in response to their heartfelt requests.

Jesus was a tenderhearted man.

But what kind of toughness did it take to hear people attribute your miracles to the devil, to walk through crowds ready to throw you over a cliff, or to endure the lashes that should never have been given to an innocent man?

What kind of man would die the slow death of suffocation to which hanging from the cross sentenced you?

With several fishermen and Simon the Zealot among His disciples, Jesus was in touch with the ordinary workingman. But He also had a tax collector, a middle-class man, in the disciples’ ranks.

He also got along with the elite of His day. Nicodemus, a member of the ruling council of the Jews, visited privately to talk. Jesus had friends among the rich, including Joseph of Arimathea, who purchased the place where He was briefly buried. Joseph was also a member of the Council and was prominent enough to be granted an audience with Pilate.

Our vision of Jesus as the champion of the poor or the author of godly free enterprise will always need to be tempered by His unwillingness to conform to labels and neat categories. The hand that touched the leper, blessed the child and washed the disciples’ feet was also extended to the rulers of His day.

Jesus was wronged at some point by every section of society, but He kept on loving in a relentless fashion, aware of their imperfection, but believing the truth could set them free and restore them to their original purpose: loving God and loving their neighbor.

Jesus, in the world but not of it

Jesus did a lot of very ordinary things amid the miracles, parables and verbal dust-ups with spiritually anxious teachers of the law. He went out with some of the disciples while they did their work and actually helped them catch more fish than normal. He cooked breakfast for His disciples. He washed their feet. He visited people’s homes a lot—even when it was not expedient in terms of His reputation, Zacchaeus the tax collector being a case in point.

At other times He had conversations that were likely to attract rebuke. He talked alone to a woman who was immoral and a member of a despised group.

It is clear that Jesus was not “of the world.” He had not embraced its way of thinking. But His life is a severe provocation to those who would ask us to contain our lives in a Christian enclave, protected from this world and cut off from the mundane contact with people that allows communication, signals acceptance and is sometimes countercultural because it crosses boundaries of class, gender, race and creed.

Ask yourself these questions: Do I spend time with my neighbors or work colleagues or friends doing mundane, ordinary things? Do I eat with them, talk to them about sports, discuss the nature of our work, reflect on the news together? Do I believe that from their growing trust will flow the chance to talk about Jesus, life and eternity, maybe next week, maybe next year?

Living with the paradoxes in the life of Jesus doesn’t involve compromise. You’re not being asked to ignore parts of it. You are being asked to take it all seriously. It won’t always be understood when you do.

But that’s the challenge of following Jesus.

Dave Roberts is the author of Following Jesus (Relevant Books). This article originally appeared in RELEVANT.

For Such a Time as This

Avoiding the Path to Apathy