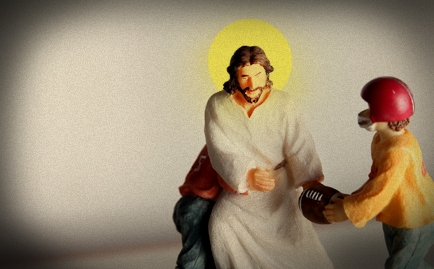 A God on True Blood?

Until a few years ago, I knew approximately two things about Christian popular culture: Left Behind and Stryper. Both made me want to bang my head. I’m a secular Jewish New Yorker who never had any reason to set foot in a Christian bookstore or turn on a Christian TV station. But I have a distant half-sister who’s Christian, and one day while visiting my wife’s family in Wichita, I ended up tagging along with her to a music festival called SHOUTfest. I was fascinated. The bands, the T-shirts, the trendy teen Bibles. It was all so—how can I put this politely?—weird.
That day was the beginning of a yearlong journey into the evangelical subculture, which was an enlightening journey. For one thing, I learned that many Christians are even more skeptical of Christian pop culture than I am. After a while, my perception of weirdness itself began to change. That’s why my list of the 5 weirdest things I discovered while being “in the Christian world, but not of it” ends quite differently than it begins.

But you knew that, right? It wasn’t long after my first visit to a Christian bookstore that I heard the phrase “Jesus junk.” A lot of Christians, I found out, are pretty put off by how cheesy Christian culture can be. And to make their point, most of them singled out Testamints, breath mints wrapped in scripture verses. Despite all the eye-rolling, Testamints have spawned an array of imitators, such as cross-shaped lollipops and candy hearts that say “TRY GOD.”

The founder of the Scripture Candy company told me his sweets let parents “get a Christian message into schools without getting into trouble.” Well, you can get something into schools, but I’m not sure it’s an authentic Christian message. There are a lot of supposedly Christian products out there, but I’ve never seen a trucker hat that said, “Blessed are the peacemakers,” or a plastic key chain that said, “Sell your possessions and give to the poor.” Maybe this lack of context about what Jesus preached is why Jesus junk is really so junky. The pitch for Gospel Golf Balls is, “Now when you lose a golf ball you will be sharing the Good News of Jesus Christ.” But when I read the pastor’s endorsement on the box—“This golf ball is the most effective outreach tool I have ever seen in golf”—my reaction wasn’t, “Wow, that must be pretty effective,” but rather, “How many golf-based outreach tools are there?” Does someone make a Cleansed by His Blood ball washer?

Bibleman is in on the joke

Bibleman, of course, is the evangelical superhero, known to insiders as the Caped Christian or, when the copyright lawyers aren’t listening, Batman for Jesus. In his popular low-budget children’s TV series, Bibleman whacks villains with his lightsaber while quoting scripture at them. Just like Jesus! When I first watched the show, I assumed the producers didn’t realize how dopey it is. But after meeting Bibleman himself—children’s pastor Robert T. Schlipp, who replaced Willie Aames—I found out that they do know. “It’s cheesy, it’s campy, it’s goofy—but in a good way,” Schlipp told me.

That struck me as a healthy attitude, but then he added that the laid-back approach extended to how the sets look on camera or whether actors hit their marks. “At some point you’ve just got to decide which is most important,” Schlipp said. “Is the production most important, or is the message most important?” In other words, as long as it’s Christian, it doesn’t have to be very good. I’m glad God didn’t take this approach in Genesis. “Well, the green sky kind of clashes with the orange ocean, but as long as people get the idea …” Most of the time, a top-notch production is its own best message.

Settling on the single weirdest example of “witness wear” wasn’t easy. I could have gone with “Jesus has skills” or “I’m like totally saved.” Or I might have chosen a high-concept T-shirt like “1 cross + 3 nails = 4 given.” And then there are the ubiquitous shirts that twist corporate logos into messages of faith. Look closely, and you’ll see it’s not “American Idol” but “Amazing Grace.” Not “Yoo-hoo” but “It was YOU WHO he died for.” And those are the good ones. It’s when these parodies jump the rails that trouble really begins. “Bloodweiser. His blood’s for you.” Really? Or the emulation of Mountain Dew’s “Do the Dew” logo that says “Do the Jew.”

Even if you manage not to misinterpret that in any of several possible ways, it’s still pretty messed up. But in the end, I could think of nothing weirder than the tangled messages of “Modest is hottest.” I tried to imagine the thinking that went into it. We can persuade girls to dress in a way that does not attract sexual attention by telling them that doing so will attract sexual attention, especially if they wear this form-fitting shirt.

Runner up: stop-sign thong underwear, from the Abstinence Clearinghouse. If you can read them, you’re too close.

Stephen Baldwin is still  a celebrity

Sometimes it seems like the people most attached to living in the Christian bubble have a bit of an inferiority complex. They judge their own culture’s worth by validation from the outside. That’s my best explanation for why any B- or C-list Hollywood celebrity who becomes a Christian is suddenly treated like royalty (as long as they give up Hollywood, of course). It’s been more than 10 years since Stephen Baldwin made his only movie of any consequence, The Usual Suspects, but at a Christian book fair I attended, the line for his autograph was a good half-hour. Baldwin now fronts a skateboarding ministry, and his skate-and-sermon video, Livin It, has sold more than 150,000 copies.

He was at the book show to hawk his memoir, The Unusual Suspect, in which he explains that he has been anointed to evangelize the youth of America, which is why God wanted him to co-star with Pauly Shore in the movie Bio-Dome. Baldwin uses the following arguments to persuade his readers to make a decision for Jesus: 1) It’s like “shooting par golf or better every day”; 2) it makes sex more exciting; 3) you no longer have to worry about things like fighting poverty and protecting the environment because God is in charge of all that boring stuff; and 4) you’re still allowed to say “crap.” Then Baldwin adds that you’re free not to take his advice, but “don’t blame me when that lever is pulled and you start falling toward hell.”

I wonder if God regrets not anointing Pauly Shore instead.

Mainstream culture has a lot to learn from the Christian bubble

Now, I certainly don’t think that all Christians are saints (or that all my fellow non-Christians are creeps), but after a year in the Christian bubble, I came to see the best aspects of Christian pop culture—the focus on fellowship, the unabashed celebration of the transcendent, the commitment to personal responsibility—as a bright light shining on the ugly side of the mainstream. I realized that Jesus’ radical message of brotherhood, selflessness and dignity may be just the antidote to our contemporary ethos of shamelessness and overindulgence. Which is why I find myself still, even with my journey officially over, stepping back into the Christian world now and again for a breath of fresh air. How weird is that?

Daniel Radosh is a writer, blogger and author of Rapture Ready. This article originally appeared in the Sep/Oct 2008 issue of RELEVANT.

What about you? What’s the weirdest thing you’ve seen in the Christian subculture?

Crisis Of Faith: Why I Left The Church

Don’t Dislike Yourself for Disliking Yourself