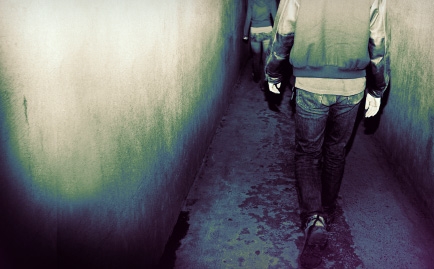 His name was Shane. He was a crooked-toothed, cockney-spitting Brit from Essex. He called himself a “traveler.” Not one word came out of his mouth that I would repeat to my mother. When he finally quizzed me on my travels and doings in Thailand, I told him I was trying to make friends with prostitutes and help them find other jobs. After patronizing me for a few minutes, telling me I couldn’t save the world, he charaded himself tying a rope around his neck as if to hang himself. He told me I ruined his night and he needed to head home. Best buzzkill ever.

We all know the playground saying, “Sticks and stones may break my bones, but words will never hurt me.” We also all know that’s cute, but not at all true. Shane went his way and his bitter exasperation went with me, haunting me and disillusioning my previous callow disposition toward my mission.

I am living and working in a thriving red-light district of northern Thailand where prostitution is illegal. Don’t worry, there are policemen on every corner. My eyes follow them as they parole in and out of the bars, night bazaars and disco clubs, but don’t breathe a sigh of relief yet. These law enforcement officers and public figures are collecting their bribes and payoffs. Essentially sending the unmistakable message that it is completely acceptable to buy and sell women and children. Thailand receives more than 5.1 million sex tourists a year, and the actual numbers may be exponentially higher because many men will never admit to their personal reasons for travel and “business.” Yet it doesn’t take Sherlock Holmes to determine these “tourists” are not just hiking or working on their tan. These bar districts are teeming with Western men providing me with endless conversations with the faces of the demand serving Thailand’s sex industry. These “johns” are the source of the perpetuation of Thailand’s, and thus the world’s, thriving multibillion dollar sex trafficking cartel.

Before you read any further and are tempted to disparage and judge these johns, namely my friend Shane, allow me to expound my graceful perspective, transpiring my temporary disillusionment, based on my endless conversations with these men.

He is paying for an illusion; he is so fooled he pays for it over and over and over again, hoping each dollar he shells out will purchase the belief he seeks to achieve in his own mind. He suppresses the uncomfortable truths he knows all too well deep in the recesses of his subconscious. The truth is that aside from basic human instincts, he needs intimacy and connection with someone. He wants to forget responsibility and fulfill his most selfish desires by disregarding the humanity of another person. His wants, needs and desires reign supreme. This experience is all about making him feel good.

The bottom line that keeps the flood of Western men flowing into this country seeking cheap women is the basic assumption that men who buy sex are just doing what men do—“boys will be boys.” But undoubtedly, wherever I sit in a bar, after some flirting with some of the local Thai girls, a john will float over to me, simply because he is starved for deeper English-speaking conversation … only to eventually float back to groping the women at the bar and leaving to take a girl back to his room.

Many conversations consist of family back home, why he is traveling, discussion about the meaning of life and many other contemplative topics. The most frustrating part is I can relate to so many of their questions and rebellious dispositions. Lost and grasping around to hold onto anything to fill the voids in their souls, they invariably wake up the next morning still gasping for the air of meaning. Any self-aware person could have a conversation with one of these men and conclude that they are broken.

The most mystifying part is that I am easily desensitized to the catastrophe of their business with these girls. I watch it night after night and I myself justify their acts with my numbness toward this reoccurring scene and critics arbitrarily flinging their agnosticism on my hopes for these girls’ lives.

I fight to keep my mind from committing mutiny against my very passions that have driven me here to work. It says my precious Thai friends’ comatose revelry is not so bad; these men do have primal needs and at least they pay to help the girls support their families. A john will stare me in the eye and tell me how much he loathes moralistic conversation. He will point his finger into my very existence and bitterly spit words like, “You’re so young and naïve, you don’t understand the culture—these girls are desperate, they don’t care about relationships and they only want your money.”

As I ride my bicycle home, wondering once again if I am wasting my time, I feel drunken, dubious laughter echoing through an alley and stinging my ears as I ride by. I look up at the black night sky and squint my eyes to make sure, but it seems as if even the moon is laughing at me. I doubt my presence here, I doubt my efforts and I doubt even my mere smile of kindness.

I have to shake that heavy demur off my shoulders into the streets I leave behind. I lift fierce prayers up to God for these broken men and for renewed passions to seek justice for my exploited sisters in the bars. Their countenance looks different, but both the faces of the users and the used display nothing but hopelessness. It’s a leveled playing field, the one that pays for the sin and sins for the pay. They both need endless intercession.

Why Do Prayers Go Unanswered?