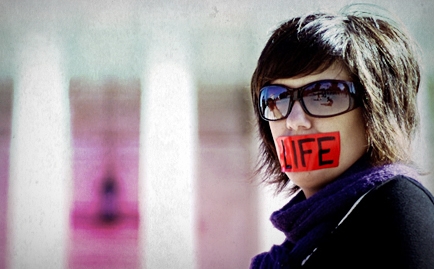 A typically colonial two-story building sits on the edge of Pennsylvania Avenue in Washington, D.C., its thinnest corner subtly pointing toward the Supreme Court. Restaurants and businesses occupy the street level, while politicians and their interns fill most of the apartments above. One of the apartments, however, is inhabited by interns on a completely different kind of political mission: praying for the country and the rights of the unborn.

The group, made up mostly of Christian college students and twentysomethings, strategically prays in shifts six days a week. For eight hours each day, prayer emanates from the second-floor apartment. Then, in two-hour shifts, groups of six to 10 gather directly on the steps of the Supreme Court to pray with red duct tape covering their mouths. On the tape, the word “LIFE” is scrawled in large, black letters. The entire group stands in silent prayer, with one member appointed as a spokesperson for any passersby who want to ask questions.

Matt Lockett is a leader in this countercultural prayer movement, which currently employs 30 to 40 volunteer interns. “Prayer and fasting brings change and shifting in the government and in moral values,” Lockett says. “These things can’t be decided in earthly ways … that’s why these young people are praying. They’re praying for God’s Kingdom to come in the earth.”

Dreams in Denver and Prayers in D.C.

Lockett wasn’t always so focused, or so radical, about prayer—or anything else. There was a time when he still lived in Denver, Colo., that his life was the picture of suburban stability. “I had a good career, wife, kids,” he says. “I was a volunteer youth pastor, and life was chugging along; I really thought that’s the way things would always be.”

Lockett always thought of prayer as a side issue. “I knew it was something I was supposed to do. But for me, it was a nagging responsibility.”

A vivid dream changed that.

“In September 2004 I had a dream about God ending abortion in America through day and night prayer,” Lockett says. “My whole life and mental understanding completely changed after that.” Soon after, Lockett and his family sold their house and moved to Washington, D.C. to support The Cause, a prayer movement that was then still in its infancy.

Shortly after the Locketts’ move to the nation’s capital, the “Justice House of Prayer” on Pennsylvania Avenue was established. The little apartment was meant to be ground zero for a certain kind of prayer that exists only on the fringes of the mainstream American church. Unlike the reverently subdued benedictions of the more popular liturgical-style services, The Cause began to experiment with a fervently raucous style of prayer that lasted from sundown to sunup and back again. And it was manned by mostly 18- to 30-year-olds who, like missionaries, raised their own financial support to focus on prayer for one year.

On the opening day of the Supreme Court session in October of 2004, the team first began their prayer movement on the court steps, the now-familiar red tape covering their mouths. The group of 50 young people stood in silent prayer, a stark contrast to the throngs of chanting pro-choice protesters. Such a stark contrast, in fact, that a leader of the fervently pro-choice National Organization for Women approached the group, telling them, “What you guys are doing is brilliant strategy.”

The Potential of Heaven

If there is a biblical prototype for these radical young Christians, Lockett points to the figure of Daniel. “Daniel was a guy who had zero compromise in his life. He was right smack-dab in the middle of the university of Babylon, yet God had made him 10 times better than his peers.” Lockett maintains that, in the ancient Middle Eastern culture, “Daniel was a pacesetter; he set the standards in the middle of a foreign culture.”

“How did he do that?” Lockett asks rhetorically. “Daniel would go into his room and pray and fast.”

If the prayer interns look to Daniel as their model, it’s because they were influenced by The Cause’s founder, Lou Engle.

Previously, with pastor Che Ahn, Engle had spearheaded The Call—a massive one-day prayer gathering on the National Mall in Washington, D.C. that attracted more than 300,000 participants in September 2000. After that, Engle organized seven more regional gatherings that focused on engaging young people in a day of prayer and fasting for their cities and nation.

Following the regional gatherings, Engle felt that God gave him a much more specific job to do: pray for the prohibition of abortion in America. “I had been reading about the anti-slavery activist William Wilberforce, and I just had a real strong sense that I was called to stand up in a similar fashion on behalf of the unborn,” Engle says.

Nevertheless, he understood the implications of a career spent defending the pro-life position. “When you bring up the issue of abortion, in many ways you become persona non grata. It’s not a politically correct issue, but I believe it’s an issue the Church needs to grapple with.

“The Bible says that before a child is formed in his mother’s womb, God knows him. It’s a life, a dream of God—which means that, since 1973, there have been 47 million dreams of God shattered in this country alone.”

Of course, this begs the question: If Engle and his group are so passionate about ending abortion, why choose prayer as a main vehicle of protest? Why not get in the picket line or, better yet, lobby for new legislation?

Simply, he feels prayer is a more powerful vehicle to enact change.

“I read this book, Engaging the Powers by Walter Wink, that contains one of the best chapters on prayer that I’ve ever read,” Engle says. “[Wink] says prayer is the most powerful force for justice in the world, that it releases the potential of heaven into the grinding atmosphere of the earth. So God thrust me into praying for justice, specifically for the justice of the unborn.”

Lockett agrees. “We’re into prayer and fasting because we think that decisions are made first in the heavenly realm,” he says. He also believes that prayer is effective because it goes far beyond politics. “We’re not Republican, and we’re not Democrat,” he says. “We’re for righteousness and justice.”

Prayer as a Lifestyle

The Cause is centered around the idea of prayer as a dynamic action rather than a passive event. This is why the movement calls interns to leave their homes, live in community and pray in an outwardly demonstrative manner. “God has called us to put feet to our prayers,” Lockett says. “My understanding of prayer is this: Stop living the American dream and live God’s dream.”

It’s obvious that Lockett and those who have connected with this movement of prayer and fasting have found their lives consumed by the cause of intercession. Young people like Jonathan Mills, 23, have traveled extensively in order to see God change their nation. “I’ve seen God do some amazing things as a result of prayer,” he says. “That’s why I’m praying now.”

Lockett understands the high cost of surrendering to a life of prayer. “I sold my house and moved my family to Washington, D.C. We’ve given our lives to this thing. We have given ourselves to massive prayer and fasting … so that God’s kingdom might come to this nation.”

Has the sacrifice been worth it?

Lockett pauses. “I was flying across the country recently, and I was seated next to an elderly woman on the plane,” he says. “She was asking me about my life, and I was trying to explain to her what I do when she stopped me and asked very bluntly: ‘Is there hope for America?’

“I said yes … because I live with young people who pray and fast for this nation daily. And it’s because of their lives that I know that God has a purpose for this nation.”

For more information about the efforts to end abortion through prayer, visit Bound4Life.com. This article originally appeared in RELEVANT magazine. To get more articles like this every other month, you can subscribe by clicking here.