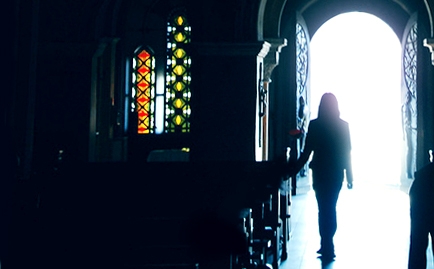 That was the ending of a prayer I once heard made by a 5-year-old girl. I’ve come to believe it to be the most selfless, beautiful, profound prayer I’ve ever heard.

I remember being at a Bible-study session where the teacher causally mentioned that Abraham was the only man God ever called His friend. Days later, that statement came back to me. My train of thought went exactly like this: First, I was awestruck by Abraham receiving such an honor—I mean, really, how cool would it be for God, the Creator of the Universe, to call you his “friend”? Then I began wondering if I was God’s friend. It occurred to me that I was probably Jesus’s friend, since I believed in Him, but I doubted this logic was supported anywhere in the Bible. I happened to be on my way home to read a book as this was playing out in my head. By the time I got to my room, I was still so moved by the idea of being God’s friend that I decided to read my Bible instead. With no specific direction in mind, I began flipping, ultimately deciding to read something printed in red. I settled for the first red-covered page I came to and began reading directly where my eyes fell.

The passage I landed on was from John 15, and the first words I read were: “You are now my friends.” I nearly jumped out of my chair. Looking back, I figure the odds of my turning directly to that passage, in that moment, have to be roughly 3 million to one. Ever since that day, I have slowly been realizing that Jesus is not just my God, not just some all-powerful deity, but also, and perhaps more importantly, He is my friend.

The term "friend" hints at fun, at playfulness—at being comfortable. And I know, for my part, I’ve spent far too long being stoic and stiff with God. The more I thought about it, the more I realized I was too full of polished religious lingo. I was talking with God as if I had no idea who or where He is.

I left Bible study that night unable to get the words, “Thanks, God. Bye!” out of my head. No matter what else I tried to think about, those three words haunted me. So as I drove home that night I found myself turning down the volume of the radio and beginning to talk to Jesus. Only, this time I was doing just that: I was talking.

And as soon as I finished praying, I felt a strong sense of peace. I knew in my heart that I was really talking to Jesus. And for the first time, I felt like I’d said exactly what I wanted to say. There was nothing religious about the prayer. It was simply a running dialogue of what I was thinking that very second. I realized for the first time that, because of Jesus’s resurrection, the God of the Universe is actually interested in anything I have to say to Him.

But then bedtime came.

For me bedtime has always been a moment for a more formal prayer. I geared up for the bedtime prayer, snuggled my head into a comfortable spot on the pillow, closed my eyes, and began to pray. And as the words left my mouth, I made a shocking discovery. Since in this prayer forum (bedtime prayer) I discuss things that are very important to me, I do something that many other Christians I’ve heard pray also do: I keep saying “I pray.”

Suddenly, I began wondering whether God really needed me to tell Him that I was praying. After thinking about it for a second, I realized that since He is omniscient, He is probably already aware that I am praying, so I decided to cut the term I pray out of my prayer. That’s when I made my shocking discovery.

For the first time, I saw myself as painfully needy. No matter how hard I tried to stop, I couldn’t prevent myself from telling Jesus what I wanted Him to do for me. It occurred to me that if Jesus is really my friend, then we aren’t having a very bilateral relationship.

I resolved from that night forward to stop constantly telling Jesus that I was praying, because He knew what I was doing. I wasn’t praying, I was requesting.

Jesus saved my prayer life. Quite literally, He saved it. He turned a practice I was bored with into something exciting and fresh. Today I talk with Jesus the same way that 5-year-old girl did, by saying exactly what’s on my mind and then telling Him that I’ll talk to Him again soon.

Excerpted from High Points & Lows by Austin Carty. Reprinted with permission from Plume Books, an imprint of The Penguin Group.

More People in India Have Access to Mobile Phones than Toilets