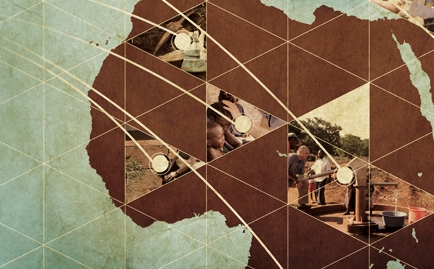 I really enjoyed a column by Brad Greenberg (of The God Blog) a few weeks back in the Wall Street Journal‘s “Houses of Worship” column. The piece, entitled “How Missionaries Lost Their Chariots of Fire,” took a look at the trends in Christian missions in recent years—most notably the shift among younger evangelicals from proselytizing and preaching to doing more service and social justice-oriented work as mission. A shift in focus from words to deeds.

Evangelical youth now hold the term “missionary” at arm’s length, afraid of the colonialist connotations of the word. They prefer being involved in “social justice” under the auspices of a more generalized Christian sense of charity rather than operating under anything resembling (groan) “soul winning.”

Greenberg cites such popular organizations as Invisible Children, an ostensibly Christian social justice organization whose media kit states that its founders “believe in Christ, but do NOT want to limit themselves in any way.”

Greenberg, who notes that “Christians today typically travel abroad to serve others, but not necessarily to spread the gospel,” ultimately concludes that as much as abandoning the colonialist undertones and “vacationary” short-term reputation of evangelical missions is a good thing, we have to remember that both actions and words are necessary in missions.

"Spreading Christianity through deeds alone aligns with a quote attributed to St. Francis of Assisi: ‘Preach the Gospel always, and if necessary, use words.’ But research suggests that non-Christians often miss the message without the words.

"A 2006 study by Calvin College’s Kurt Ver Beek found ‘little or no difference’ in the spiritual response between two groups of Hondurans—one which had its homes rebuilt by missionaries who did not proselytize and the other by local NGOs. Intuition would suggest as much. Unless foreigners explain that they are motivated to help by their religious beliefs, locals may be grateful for the new home but they should not be expected to connect dots that they may not even know exist.

"The reality is the Church should be doing both: serving the needy and spreading the gospel. This is what makes the humanitarian work of Christians different than that of the American Red Cross. Both are motivated by the desire to help others, but Christians are spurred by that Jesus thing."

Props to Greenberg for highlighting this important point—that in our desire to move away from the ills of “old school” missions thinking we don’t throw the baby (preaching the Gospel) out with the bathwater (colonialism, etc). Sadly, we  pendulum-prone evangelicals have a hard time with these both/and scenarios—always inclined to correct the ills of one thing by a wholesale replacement of it with something equally full of its own ills.

I’m all for social justice. I’m passionate about it. Christians have to be serving people and loving them not just in word but in deed. But man, if I hear another well-fed, TOMS-wearing evangelical kid quote St. Francis (“preach the Gospel always, and if necessary, use words”) one more time as a justification for their unwillingness to utter a word to anyone about Christ as the one true hope, I don’t know what I’ll do.

It’s an ongoing debate in missiology: Should missionaries in foreign countries prioritize meeting physical needs (food, water, social justice, development) before they preach the Gospel, or should evangelism always be given primacy?

To me, the debate is silly. Can’t we do both simultaneously? Can’t we serve others and meet their circumstantial needs while at the same time telling them about Jesus? Yes, we should be in Africa building water wells, or in Haiti building schools, but what’s the harm in mentioning along the way that we are Christians acting as the Church, loving the world because God loved it?

I’m not sure missions could ever be too focused on deeds—unless it is at the expense of the equally important words of truth that people need to hear. I hope my generation figures out a way to emphasize both.

Brett McCracken is a blogger and author of the upcoming book Hipster Christianity
(Baker Books). His love for the new Arcade Fire album borders on idolatry. This article originally appeared on his blog and is used by permission.