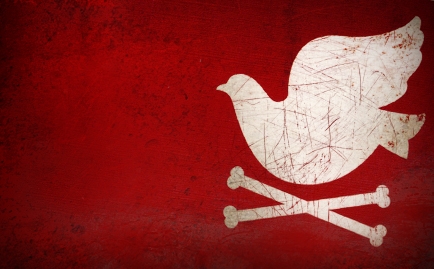 History demonstrates that blatant evil can be conquered. In my lifetime I have watched Solidarity’s bold Polish workers defy a seemingly invincible Soviet system and eventually contribute to the collapse of the Soviet Union. I have watched courageous, nonviolent Filipinos lie down before powerful tanks and overthrow a vicious dictator. I have watched, even played a tiny role, as a global coalition of activists helped daring South Africans bring down a powerful, decades-long system of apartheid.

A longer historical perspective underlines the fact that there is nothing inevitable and unchangeable about widespread injustice. William Wilberforce and his small band of supporters worked tirelessly both inside and outside Parliament for more than thirty years—eventually persuading the British Empire to abolish the slave trade and then slavery itself. At the time when my ancestors, the sixteenth-century Anabaptists, championed religious freedom and were executed by the thousands for their beliefs, they could not foresee that two and a half centuries later, the authors of the American Constitution would place religious freedom at the center of their grand experiment and that over the course of the next two hundred years, religious freedom would become the norm rather than the exception around the world.

None of these movements brought utopia. Sin and selfishness persist. Injustice continues. But the evidence is clear. Things can change. Unjust structures can be demolished. Faithful, bold, persistent movements can move society toward greater justice.

Christians know that when society changes for the better, God is pleased. The Lord of history works in history to nurture justice and calls on His people to join in the struggle.

The Creator made men and women in His very image, and then assigned us the task of being stewards to watch over and care for the gorgeous garden He had created (Gen. 2:15). God called us to be co-workers, slowly discovering His stunningly complex design in the natural order and then using that growing knowledge to shape civilizations of beauty and goodness. Sin, of course, has messed up everything. But if the history of Israel teaches us anything, it’s that  history is a dialogue between God and free, responsible persons and that God keeps summoning us again and again to empower the poor and needy and to nurture justice.

There are hundreds of biblical verses that talk about God’s concern for the poor. God sent prophets not only to warn Israel and Judah of coming catastrophe because of their idolatry and injustice, but also to promise a future time when the Messiah would come. In that day, there would be peace and justice for the poor.

When Jesus came, He claimed to be that long-expected Messiah. He loved and cared for the whole person. He warned His disciples that if they did not feed the hungry and clothe the naked, they would go to hell (Matt. 25). Most exciting, He promised that the Messianic kingdom, which He said was now breaking into history visibly and powerfully in His growing circle of disciples, would grow larger like a mustard seed. He taught His disciples to pray that God’s kingdom would come—that God’s will would be done on earth as in heaven. He taught that, in the power of the Holy Spirit, His followers could already begin to live that way in dramatic (albeit imperfect) fashion and then promised that at some time in the future He would return to complete the victory over all sin and injustice. At that time, even the groaning creation will be freed of its bondage to decay (Rom. 8:21). All tears and injustice will disappear, and the kingdoms of this world will become the kingdom of our Lord and Christ.

I have been working for social justice for more than four decades.

We have won some battles, and lost others! People have asked me: "What keeps you going, Ron?"The answer is simple. Jesus rose from the dead and promises to return sometime in the future to complete His victory over evil and injustice. I know where history is going. The final word is not the victory of injustice. The final word is the return of the Resurrected One, who will wipe all tears from our eyes.

Today’s Devotional: Life To The Fullest

But you and I live in the "in-between" time—between the dramatic in breaking of the kingdom of God in Jesus’ life, death and resurrection and its completion at His return.

So what do we do now? We pray hard and work hard.

Let us never suppose that success depends on our diligence and brilliance. This is finally God’s task. Of course, we should work hard. We are God’s stewards, and God wants to change history through our faithful efforts. But the task is finally the work of Almighty God, the Lord of history, the present and coming King. As such, we should pray as hard for our campaigns for social justice as the wonderful people in a Billy Graham evangelistic campaign have prayed for evangelism. And we should combine our prayer with our most brilliant strategic thinking and most persistent hard work. When God uses our efforts to expand religious freedom, democratic governance, fair legal systems, and socioeconomic justice, let us give thanks to the One who empowers and sustains us. And when we face setbacks, we should remember they are only temporary. Jesus has burst from the tomb. Jesus has already won the decisive victory over all evil. He will most assuredly, as He promised, return someday to complete His victory.

This excerpt is taken from The Revolution (RELEVANT books).

Ronald J. Sider (PhD,Yale) is a professor of theology, holistic ministry, and public policy; director of the Sider Center on Ministry and Public Policy at Eastern Baptist Theological Seminary; and president of Evangelicals for Social Action. He is the author of twenty-seven books, including Rich Christians in all Age of Hunger, which was recognized by Christianity Today as one of the one hundred most influential religious books of the twentieth century.

The Heart Behind the Power of Half