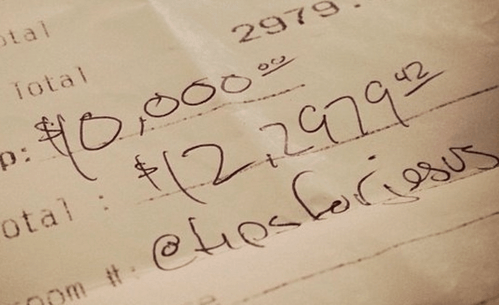 The mysterious man behind the “Tips for Jesus” movement has finally spoken to the media and revealed his motivations for posting Instagram images of his extravagant tips. However, the interview with San Francisco Magazine was done under the condition that they not reveal his identity (though he’s rumored to be a wealthy, former PayPal executive). Last year, servers at restaurants around the country started receiving massive tips that contained the message “@Tip for Jesus” a link that led to a social media account showing images of the receipts. Soon, the campaign, and news stories about the generous customer, started going viral. In the interview, the mysterious tipper said that despite the hashtag, he’s not motivated by religion: “The movement we have started is intended to be agnostic.” Instead, according to the story, his motivation is to convince others to live generously:

The way he tells it, the whole Tips for Jesus “movement” was created as something of a guerrilla effort to encourage more people of means to give back—to foster a kind of ad hoc charity culture attractive to a generation that may be turned off by traditional philanthropy … The goal isn’t just to tip in a vacuum, he says—it’s to create a stream of copycats. “And we wanted to harness social media to do that,” he says. If, after all, you want to spread the gospel of extravagant giving, there’s no better way to do it than through the social web.