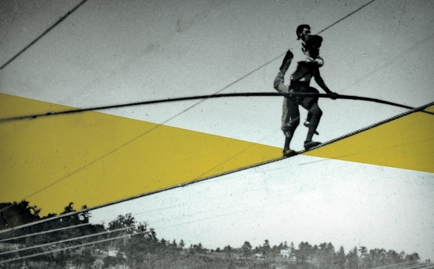 Charles Blondin was a world-renowned tightrope artist and acrobat. On June 30, 1859, before a stunned crowd of 100,000 excited onlookers, Blondin was the first person to cross Niagara Falls by tightrope. He crossed 1,100 feet on a single three-inch hemp cord, strung from 160 feet above the falls on one side to a spot 270 feet above the falls on the other. The breathless assembly watched him accomplish, step by slow step, a feat most believed impossible.

But Blondin was just getting started. In the years to come, the daring entertainer crossed again and again: on stilts, in a sack, even pushing a wheelbarrow! The story goes that an exuberant onlooker called out, “You could cross with a man in that wheelbarrow!” Blondin agreed and invited the man to climb in. The spectator nervously declined.

My dysfunctional relationship with God was often like that. I’ve always believed in God, just not enough to trust Him with my whole life in His wheelbarrow. I knew God could fulfill His promises, but I was never sure He’d do it for me. My selfish Christian Atheist view was that God existed for me, rather than I for Him. If He’d do what I thought He should, I’d trust Him more. If He’d come through for me, I’d give Him more of my life. If He made my life better and pain-free, I’d believe Him more passionately. But anytime God didn’t meet my expectations, we had a problem. God created me in His image. I returned the favor and created Him in mine. The kind of God I wanted to believe in was this: If He’s not what I want, then He can’t have my whole life.

Several years ago, I increasingly recognized inconsistencies between what I claimed to believe and the way I actually lived. I preached that people without Christ go to hell, but my life showed I wasn’t equally passionate to reach those people. Though I believed God wanted my life to be different, I found comparing myself to others easier than measuring my life against Christ’s. I preached that prayer is critical. But my prayer life was virtually nonexistent. God’s Word said my treasure shouldn’t be in this world, yet material things continued to grab my attention. Jesus said, “Don’t worry about tomorrow.” But worry came as naturally to me as breathing.

If I truly belonged to Christ, I should surrender my whole life to Him. I just gave Him parts instead, and took them back whenever He didn’t do what I wanted. I called myself a Christian, but I lived like an atheist.

One day I was at home working out on my elliptical machine, listening to a sermon on my iPod. Suddenly I just had to stop. Surrounded by God’s presence, I knelt down on the floor and started crying out to God. If you had seen me, you would have thought I was falling apart. But God was putting me back together.

I cried for all of God, and His presence became immediately real. Although I’d unquestionably been spiritually reborn a decade and a half ago, it was like I was being born again.

I’ve always believed in spiritual visions; I’d just never had one. Not anymore. I saw a picture as clear as the words on this page. I stood before three lines in the sand. Somehow I knew what each line represented.

Line 1: I believe in God and the Gospel of Christ enough to benefit from it. Like so many others, crossing that first line was easy. Sadly, many who call themselves Christians live here. If there is a God, I want to be on His good side. I want to go to heaven. I want Him to bless me with good health, good relationships and a happy life. Like the nine ungrateful lepers in Luke 17, once God had helped me, I forgot about Him.

Most wouldn’t admit this is all the faith they can manage. We want God’s benefits, without changing how we live. We want His best, without our sacrifices. At the first line, we don’t fear God or share our faith. We still love this world. We’ll pursue happiness at any cost. The list goes on and on. We first-line believers get what we can from God without giving much, if anything, back.

Is first-line faith real Christianity? Is believing in Jesus enough? Although God is the only true judge, I’m not sure simply believing in Christ makes a person a Christian. Honestly, I’m tempted to say, “No, I sincerely don’t think it is real Christianity.” Even demons believe in Christ. I worry how many people might be deceived. Instead of truly living as followers of Christ, many lull themselves into a sense of false comfort. What if they’re really “cultural Christians,” false believers? I don’t point my finger at others, only at myself. For way too long, I’ve claimed a belief in God, but my life didn’t reflect it.

Line 2: I believe in God and Christ’s Gospel enough to contribute comfortably. Past the first line are people who believe in God not only enough to benefit but also enough to give back—as long as it doesn’t cost too much. Many first-line Christians eventually cross the second line. If I don’t have to change too much, I’ll do some of what God asks. If it doesn’t hurt too much, I’ll get more serious about God. But everyone has their limits, right? Like the rich young ruler in Matthew 19, I was willing to go along with the religious rules as long as it didn’t hurt too much.

There, on the floor next to my elliptical, still crying, I realized: I was a second-line believer. I’d serve Jesus in ministry, but I didn’t want too many critics. I’d give up some things for Christ, but being away from my family often was too much. I’d follow Jesus anywhere as long as the job included insurance for my family. The third line was just inches in front of me.

Line 3: I believe in God and Christ’s Gospel enough to give my life to it. Although most people I knew were line-one and line-two believers, suddenly anything less than line three didn’t seem like real Christianity to me. Could I give my whole life to Christ? Not only in words but in my daily life?

I knew in the deepest part of myself: I have to be a third-line believer. With unquenchable thirst, I pursued living water above all substitutes. I started praying like never before. I started pursuing God in the morning and continued throughout the day. Jesus was on my mind when I fell asleep and when I awoke. Scripture started becoming my bread of life, nourishing my soul.

I believe in God and Christ’s Gospel so much that I’m willing to give my whole life to His cause. Nothing in this world is more important to me than my treasure in heaven. No fear in my heart is greater than my fear of God. I desire nothing more than I desire all of God. Tears are filling my eyes as I type this. I cannot put into words what God has done in my heart.

I am a different person.

Are you a Christian Atheist? Do you believe in God but live as if He doesn’t exist? Consider the third line. Ask what separates you from a wholly surrendered, Spirit-filled, Kingdom-driven life. Weigh your options. Life as it is … or as it could be.

Do whatever it takes.

Step across the line.

This article originally appeared in the Summer 2010 issue of our sister publication Neue magazine. Neue‘s mission is to communicate the ideas shaping the future of the church.

Martin, Muslims and the Softening of a Heart