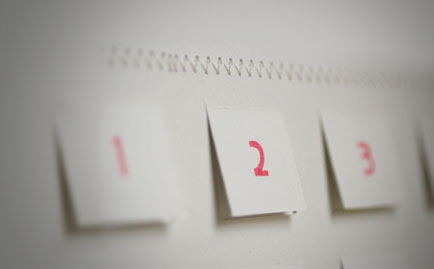 Why Advent is more than wreaths and stale chocolate-laden calendars.

"Advent" is kind of a strange term. It seems vaguely religious, but it’s also a word often used in reference to video game sequels. If you grew
up in the West, you’ve certainly
seen an advent calendar—if only to experience the terrible, stale
chocolate hidden within. Normally, when we think of Advent, we usually think
of it as a countdown to Christmas—a sort of chocolate-y version of
those paper chains you’d make when you were little to count down to the
day you got presents.

You also might be familiar with an
advent wreath, particularly if you’re Anglican or Roman Catholic (or
grew up in either of those Christian traditions). You know there are
four candles (and maybe one in the middle) and that it has
something to do with the birth of Christ. You know there’s a
significance to the four weeks leading up to His nativity, but
maybe haven’t thought much about it.

And yes, Advent is all of
this. It’s a "countdown" to Christmas. It’s a commemoration of the
birth of our Savior. But it is also so, so much more than that.

When
we talk about the "advent" of something, we’re usually referring to its
beginning or coming into being. So, for instance, the "advent" of
writing a term paper might be the initial research you put into it. Or
the "advent" of a football game would be the kickoff (plus, I’d pay
money to hear Al Michaels use the term "advent" in the middle of a
game).

That definition is a good place to start. For Advent, is, indeed, a beginning.
It’s the beginning of the Christian story, the birth of Christ. The
season of Advent anticipates this birth for four weeks leading up to
Christmas, through a variety of readings, prayers and other observances
(depending on the tradition).

But perhaps an even greater
reality lies just beneath the surface. In many churches the first
Sunday of Advent marks the beginning of the liturgical calendar—the church calendar that divides the year into celebrations
of the many qualities of God. The church calendar reminds us we are in
a story greater than ourselves; it pulls us out of the daily minutiae
of life and trying to make it to the next day (or, in most cases, the
weekend) and lets us know that we are, in fact, living in God’s
reality, not our own.

Advent also has its roots in the Greek word parousia,
a term used in the Bible to refer to the Second Coming of Christ. This
is one of the other ways the idea of Advent is deeper than might
be expected. In many traditions, Advent serves a dual purpose—to
commemorate the birth of Christ, but also to anticipate the
Second Coming of Jesus. Each Sunday in Advent centers around this
tension. The Savior of the world, Jesus Christ, will be born into
humble circumstances … and we simultaneously look forward to His
final return to usher in His Kingdom.

I don’t use "will be" by
accident—one of the most powerful aspects of centering ourselves in the
reality of the Christian calendar is to be able to experience the
Christian story as it happens. So we can look for the birth of Jesus,
the Messiah, with the anticipation of first-century Jews. And we can
look to the Second Coming of Christ with the anticipation of a people
who catch glimpses of God’s Kingdom but for whom the reality of the
full Kingdom, when everything will be put right, seems tragically
distant.

All that anticipation is another reminder of what Advent
brings: it reminds us of waiting on God. When Christ was born in the
most humble of surroundings, He came to a culture centered around the
idea of waiting for a Messiah—even those who weren’t explicitly waiting
had just forgotten how (especially those in political or religious
authority who found the absence of a Messiah profitable). He came to a
place so eager to find a deliverer that they believed they’d found one
every few years.

And now, we wait again—we wait for the return
of Christ. Whatever you believe Christ’s return will look like, the
fact remains that He will, indeed, return one day. He’s the firstborn
among the resurrected, and we wait for His return as we wait for the
resurrection of the dead. We wait to be reunited with those who have
joined Jesus in His eternal kingdom already. And we wait for the
injustice and oppression we see around us and the groaning of all
creation to finally be answered. Waiting on God is a Christian
activity, and Advent reminds us of what we wait for.

Nowhere else is the entire breadth of the Christian narrative summed up
in a four-week period. We have birth, the beginning. And we have the
Second Coming, the end. Well, at least as much as an eternity with God
can be "the end."

The
first Sunday of Advent was yesterday and continues through Christmas.
This season, consider observing the many sides of Advent. You don’t
have to get a wreath or even a chocolate-filled calendar if you don’t
want to. But in the weeks leading up to Christmas, remember a Savior
who was born. Remember that this season is the beginning of a new
Christian year—a timeline that encourages the exploration of the person
of God. Realize you live in God’s timing and that waiting on Him is an
act of trusting worship. And remember Advent points to the One who
is to come. In the midst of the busyness of the season with family,
presents, Santa, Charlie Brown, Bing Crosby, ornaments and that creepy
manger scene your grandparents have kept since 1951, remember this
season shows you God’s love. He sent His Son once to die for
all—and He’s sending Him again to bring His Kingdom to Earth.

Hearts Warmed by One Another