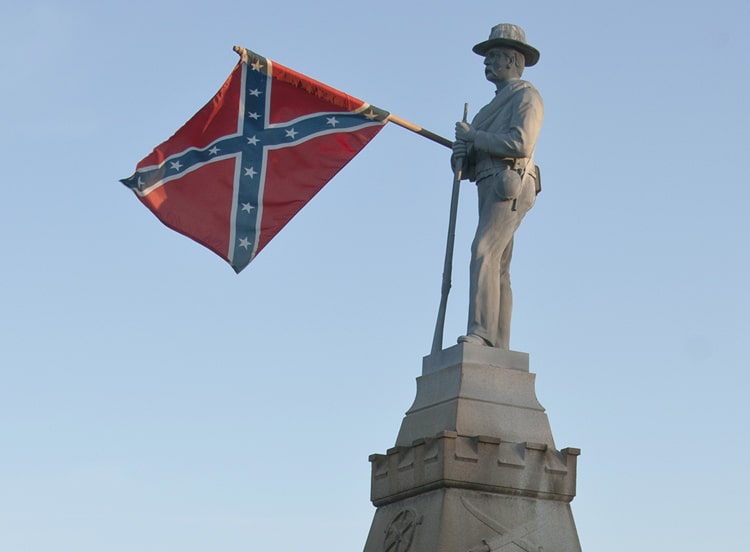 I have a 3-year-old girl and a 1-year-old boy in my house. We are entering that stage where they’re interested in all the same toys. More accurately, that stage in which the older sister is immediately interested in whatever her younger brother just picked up.

To get what she wants, she occasionally grabs it from him and pushes him down. He cries. We then talk about how she has put her own desire for a toy or crayon above her love for her brother.

I say: “Because you loved these crayons more than you loved your brother, I’m going to have to take them away from you.”

I had one of these discussions on the very day that white nationalists and Confederate history zealots gathered in parks across the country to protest the removal of Confederate monuments and statues. Charlottesville was the extreme of the white nationalist presence, but in other cities, like mine, the alleged history buffs led the charge.

In that moment, I wished I was big enough and powerful enough to snatch that statue of Robert E. Lee from Charlottesville, and the Confederate monument from my hometown of San Antonio and say to the Christians defending them: “Because you love this statue more than you love your brother, it has to go.”

It should pain us more than it does to hear professing Christians rally to save those same flags and monuments in the name of “heritage” and “history.” How quickly they are to remind us that “the Civil War wasn’t about slavery.”

The pastor of the Presbyterian (PCA) church in which I grew up had a confederate flag hanging on his wall, next to a picture of Stonewall Jackson. He was the first to defend the Confederacy and talk about how the Civil War was about states’ rights, something he still firmly believed in.

Christians like him may cringe at their Neo-Nazi co-protesters—just like they cringed to vote for Trump. But they will fight for these monuments.

Those defending the Confederacy want to explain the nuances of how the South was fighting for the right to deregulate an industry into which the federal government had interfered beyond their constitutional right.

The fact that Confederate history zealots talk about slavery as if it were some kind of economic lever, like coal or a nuclear power plant is really more evidence that they are part of the problem. Trying to make the Civil War primarily about politics and economics is to deny the humanity of those economic units known as “enslaved people.”

That was the whole problem. One day, America woke up and figured out that black people were people, thus invalidating most of the economy in the slave-holding states. It bothers me that so many professed Christians don’t see that economy and those particular “states’ rights” as invalid. The Lincoln Republicans weren’t seeking to limit the number of cattle or acres a person could own. They were saying slavery isn’t a management option. Because they are people.

Because in the end, those history buffs are right. The Confederacy was not just about slavery. It was about political, economic and social white supremacy. It still is.

I wish that we, the white members of the Church, were more inclined to give up our economic supremacy, our political power and our sense of entitlement. I wish we were leading that conversation. As a friend of mind put it: At this point, saying “racism is bad” gets you a tardy slip and an eye roll, not a pat on the back.

The white church needs to get serious about power sharing, not just charity that maintains the current power structure. We need fresh perspectives in our leadership. We need to let go of events and habits that alienate people from lower income brackets. We need to show up at all the messy marches and counterprotests and get close enough to the fire that our choir robes get a little singed by the flames. We need to ask our brown neighbors, our LGBTQIA neighbors and our immigrant neighbors how to love them best.

I’m also reminded of the rich young ruler in the Gospel of Mark. He loved his riches more than Jesus. Whether or not Jesus intended for him to actually sell all his belongings is less clear than the fact that the young man wouldn’t do it. He loved his riches, his power, his place in the world more than he loved Jesus.

The Confederacy is still a painful reminder to our black neighbors. It has definitely been used against them, and those symbols embolden and empower those who still wish harm on them. Jesus said we are to love our neighbors, not “love thy neighbor as long as it doesn’t interfere with your celebration of family ‘heritage.’”

Bekah McNeel is a journalist in San Antonio. Her work can be found primarily on the "The Rivard Report", where she reports on education, state politics, and other issues. She is married with two tiny kiddos, who motivate her to pursue a more just world.

With ‘Rainbow,’ Kesha Proves She’s a Pop Star with Substance

Scripture Code Corner: Today, the Sun Shall Be Blotted Out