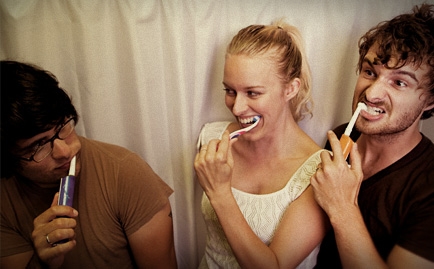 Actually, I live with three men’s wives. Of course, my own is also there, along with the others’ corresponding husbands, so it’s hardly as scandalous as it could sound. Then again, judging by the response of most people around us—including our families— you’d think I’d left it at the first statement …

Oh yes, the questions: Oh my goodness, what do you do about bathrooms? We have three and manage just fine. How can you possibly have any privacy? The house is plenty big, although you can expect some level of sacrifice there. And money? We all throw into a common purse.

It’s not for everyone. Even a few years ago, it wasn’t for me. Four years ago, I was single, planting a new church and just fine in my own house with my own room and my own stuff. But long story short, I got married and so did our church—to the wrong side of town.

Developing a heart for the neighborhood we’re in came slowly but surely for our group of mostly 20- and 30somethings. It’s the wrong side of the tracks in a dirty Midwestern town where you almost wonder if there is a right side.

Of course, the decision for four couples to move in together wasn’t as thoughtful as that sounds. It also came down to friendships, financial motivations, safety issues and a desire for shared hospitality.

“Wouldn’t it be great if we could just say good night and head upstairs rather than having to drive home?” was the commonly stated question among my wife and me and some of our best friends. Another foursome of married couples approached us once they heard we were spinning the idea in our own heads. And after three months of brainstorming and planning, we moved in together.

In this economic climate, and with my job as a part-time pastor, it also helped that my wife and I could live for a few hundred bucks a month—which includes everything from groceries to Internet access. In our scenario, each couple pays the same amount over what we need, giving us a monthly grant to give away to a neighbor in need or a nonprofit. We’ve covered our neighbor’s electric bill, given money to a local women’s shelter and sponsored a family for Christmas. Communal living has provided our group the ability to be generous.

And even though I enjoy a wonderfully healthy marriage, there are moments when outside support is necessary for my role as a pastor and as a regular person. Within our house, we’ve enjoyed times of singing together, impromptu prayer sessions and accountability. Some serious hardships have surprised a few in the house, and having close, committed relationships at arm’s length eases the pain and provides perspective, reminding us we’re in this mission together.

“A lot of people ask us about living all together,” says Tim Bock, business manager of Jesus People USA (JPUSA). “And it’s easy to sum it up in one word that properly describes community—and that’s forgiveness. Forgiving each other for leaving the garbage in the hall, for your kid swatting another kid—or you play music too loud or I don’t like the meal. At the heart of community is forgiveness.”

Bock should know—he’s lived with about 400 people for the last 30 years in a 10-story hotel in Chicago. Currently, JPUSA is a community operating both for-profit and nonprofit businesses to support the community they have formed, extending a mission that includes homeless shelters, food banks and Cornerstone Music Festival. Bock’s experience breathed words that spoke what I’m finding to be all-too-true in my current situation.

Difficult conversations confronting someone for the things they are (or aren’t) doing. Worse yet, being challenged by someone you live with because you’re injuring the community with an attitude or behavior. These are the common currency in an economy of communal living. Your heart is exposed. Your best intentions are found lying on the floor. And there’s no place to hide in the open garden you’ve created.

When forgiveness flows within the community, the individuals within finally come alive. A resolved conflict breathes new life into the house, and it’s clear that all the verses I was forced to memorize as a kid regarding settling things and not allowing bitterness to take root actually held meaning for real life.

However, finding God in the community usually isn’t about times of praying together or staying up all night worshipping—at least not in our house. For us, it’s about finding God in the mundane approaches to daily living together—cooking and cleaning, chore lists and game nights, crowding around for a Bourne marathon or our weekly obsession with Lost.

We’ve centered more discussion on chores and how to treat specific belongings than anything else. “Would you mind bringing back the entire set of dishes up in your room?” “Can you please remove your laundry within 14 days of drying it?” Of course, these statements sometimes come without the proper precursors of politeness, leading to moments of tension between the party concerned and the party who could care less. And how is someone to respond when others living in the same place mistreat his or her possessions? It’s a lesson in ownership—that offers another place of forgiveness.

It’s in these daily things, these little things, that love truly takes root. It’s in the unglamorous, boring routine that your heart really begins to change. I had a different mindset when we first began—believing that living together with other Christians in the same life stage would lead to all-night talks about how church should really be and how we would inspire one another.

But I was wrong—about a lot of things. I had no idea how selfish I could be and how hard parts of my heart were. I didn’t know I could be loved and forgiven in such deep, meaningful ways. And I also didn’t realize there could be such joy in sharing life so intimately with others.

When it’s all said and done, living in community seems to be as honest an approach as you can get to living out the Gospel. Those who go down that path experience joys and sorrows in a whole new way, finding a deeper level of living. When it comes down to it, the most I could want with my life is to live as authentically for the Gospel as I can. For us, communal living is the way to be faithful to that calling—intentionally placing ourselves in a position to be personally challenged and united together in a common mission.

This article is adapted from a feature that originally appeared Sep/Oct 2008 issue of RELEVANT.

Jesus Is Not Political

The Chronicles of Ray Bradbury