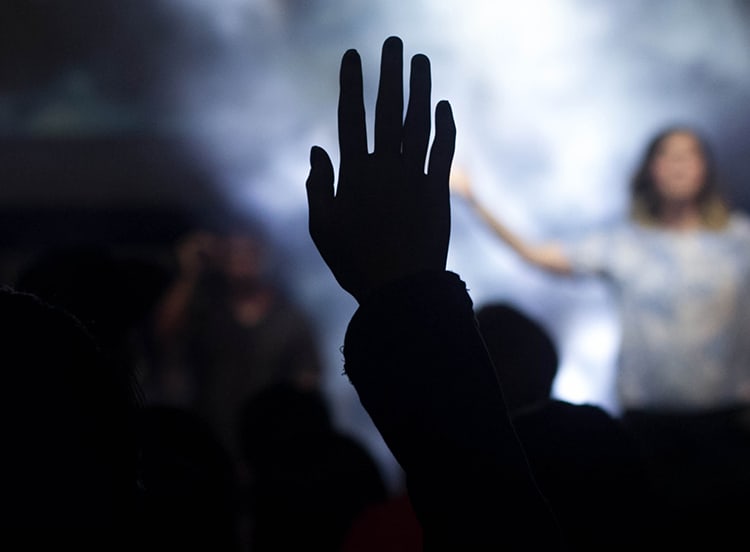 I’ll never forget the first time I had a panic attack. It was in my second year of university and I was doing what any normal 19-year-old American girl would do on a Thursday evening—buying a pint of Ben & Jerry’s at the local supermarket.

It hit me as I was scanning the freezers. As a surge of adrenaline rushed throughout my body, I had to stop and catch my breath. My fingertips began to tingle. My palms and feet started to go numb. The room started to turn. “What’s happening to me?”

My heart started to beat a thousand times a minute. My legs began to feel weak, and I felt as though I would collapse at any moment. Gasping for air, I leaned against a freezer door. “Deep breaths, Rachel. Breathe in and out. In and out. Just breathe.”

Next thing I knew, I was sitting on the floor of aisle nine with my back against the freezer doors, framed by pepperoni pizza boxes and berry-red popsicles. Hysterical, curled into a ball, and with tears streaming down my face, I must have looked a pitiful sight.

“What’s happening to me?” I cried. My knees were pushed into my chest, my head was bowed, and my shoulders rose and fell with every sob.

With every second that ticked by, I could feel the adrenaline pumping through my veins, shooting up and down my arms like an electric shock. Like waves on a seashore, the first wave swept through, then drew back for a moment—giving a sheer second of relief—only to be swallowed up by another pounding wave of dread.

At that moment, I felt a tap on my shoulder. “Are you OK, dear?” The voice of an older woman broke into my whirlwind of chaos. With bloodshot eyes and mascara running down my cheeks, I looked back at a woman in her mid-50s. Holding a box of Cheerios in one hand and a bottle of Windex in the other, she was looking at me with a concerned expression on her face.  “Are you OK, dear? Can I help you?” she asked again. “No, I’m not OK.” I replied with a muffled voice, “I don’t think I’m OK.”

What I said next was one of the most important declarations I had ever made. It was the turning point. “But I haven’t told anyone that yet. I need to tell someone. I think something’s wrong. Really wrong.”

Since the age of 19, I have suffered from anxiety. I’m one of the millions of people who struggle with this mental health disorder. In college, while other 20-somethings were busy worrying about what to wear out on a Friday night, I would retreat to my dorm room googling my latest symptoms and thinking that I had some form of cancer (stage III, most likely). Otherwise, I would be frantically checking my phone every two seconds to see if my friend had replied to my message. “Of course she won’t. She’s seen the real me. And she’s decided I’m not worth it.”

Now, at 26 years old, I want so badly to declare that I have conquered all this stuff, that I have overcome all the complexities of this disorder. I wish I could say that my anxiety is a thing of the past, that it is no longer knocking on my door to wake me up in the morning or leaning over my bed to watch as I toss and turn at night. But I haven’t conquered it, and it’s not a thing of the past.

Perhaps the most discouraging thing about anxiety is dealing with it as a Christian. In many parts of evangelical America, admitting you have anxiety is kind of like admitting you have a problem with alcohol. Or one-night stands. Or eating Big Macs in your bedroom at 2 a.m. It’s a sinful “habit” and it will sweep you to the margins, out of sight and out of mind of middle-class American churchgoers.

Or at least, this is how some churches have often made me feel. A deep and all-consuming guilt was gift wrapped and hand-delivered to me each and every morning I stepped inside a church building. And while I don’t believe for a second that the Church will ever be perfect, I expected a more loving and accepting response than the ones that I had received.

Since that humiliating incident in the supermarket, I have been navigating my identity as a Christian with anxiety. I have had to embark on the painfully slow process of finding that “thing” that brings me rest and respite from the isolation and exhaustion that comes from anxiety.

Worship, I have discovered, is that special space where I open up to the Father and receive His peace—the kind of supernatural peace that Paul talks about in Philippians 4. Here’s why worship has become my antidote to moments of anxiety.

Worship is a peaceful state of mind.

Worship is a state of mind, not just a supernatural high on Sunday mornings.

Initially, I saw Sunday worship sessions as the only time I could receive God’s peace. However, I realized that worship isn’t just meant for large gatherings or small-group settings. Worshipping the Father is a constant state of mind, an ever-present mindfulness of His goodness and grace in my life. Practicing a heart of worship—whether praying during my work commute or listening to a Housefires playlist as I clean my apartment—has been an integral part of my healing journey from anxiety.

Drawing From The Well

Worship is a safe space.

Getting a handle on my anxiety has meant that I’ve needed to get real with God. And that means getting up close and personal, divulging all of my doubts and secrets to Him like you would to your best friend over a cup of coffee. Creating a safe space where I can speak to the Father has been an instrumental part of my road to recovery—particularly picking up my guitar and singing Scriptures over myself and my family.

I believe that there is power in declaring words of life to change the mess in our lives. Worship is a powerful weapon against worry.

I love the quote by author John Paul Jackson: “Peace is the potting soil of revelation.”

I find that it is often in those moments of fear that the channel of communication between me and God is most fuzzy. But I also know that it’s in those moments when I feel at my weakest that worship ought to be the next bullet point on my to-do list.

Setting aside space for God to speak to us in the midst of fear is a powerful step to leaving our anxiety at the door. It is in those “thin places” where we hear from and speak to God that faith takes authority over fear.

I want to be careful here, as I don’t want for a second to portray to you that I have this all figured out. Navigating anxiety can at times feel nearly impossible. More often than not, it feels like treading water in the deep end of the pool and not knowing how to swim.

God has so much more in store for us than a daily battle with fear. I pray that as we cultivate a lifestyle of worship, we may find ourselves free from the chains of anxiety that have kept us from stepping into the thing that God has called us to do.

Rachel Moreland is a US expat, writer and coffee lover living in Scotland. Check out her blog - With love from Rachel – for more articles on faith & mental health.

Lamenting Injustice and the Temptation to Sleep