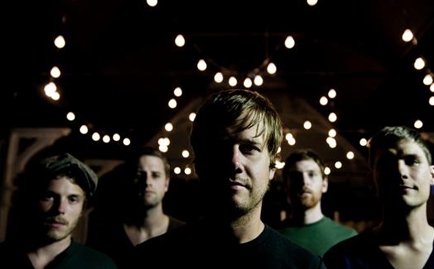 Years removed from penning the songs on The Glorious Unseen’s debut release, Tonight The Stars Speak (Tooth and Nail), lead singer Ben Crist sat nervously still, unsure if he had the ability to do it again.

“I felt like I was rewriting stuff that I’ve already written,” he explained. “I was kind of bummed out and nervous about whether I’d be able to write any new songs.” But this week, the band released their second full-length, The Hope that Lies in You.

The Glorious Unseen had its unofficial start when a group of disheartened former youth leaders and friends began meeting Sunday nights just outside of Nashville, TN to pursue God and His will for their lives. At the prompting of his friends, Crist began playing songs he thought were destined for his bedroom audience of one—not in front of his small, burgeoning church. Touched by the honest beauty in the songs, the evolving church gathered around them and in 2005 Crist released Embracing the Call, which featured five of his originals. Shortly after, Tooth and Nail Records surprisingly contacted him about recording a worship album; something he never imagined happening.

“I didn’t think I’d ever be signed (to a record label),” he said. “But you stay faithful to God and He gives you amazing things. I’ve gotten to go so many places in the last year and I never thought that was the plan for my life at one point—but that’s where the real excitement comes from, when we let go of our control and see what God has.”

The past year of touring opened Crist’s eyes to the vastness of the body of Christ and made him second-guess what he could write about for The Hope that Lies in You. Instead of spilling his honest heart’s cry out on paper, he wondered whether churches would be able to sing the questions and thoughts circulating in his head.

“I got to think a lot more about the lyrics this time around,” he said. “The last time it was just honest worship stuff. But sometimes if you write worship songs you can get in a box and it limits what you can write about.”

Instead of letting those thoughts weigh on his mind, Crist entered a place where his pen flowed freely. He says it resulted in an album that has an overall theme of hope, while asking tough questions.

“The church has taught us about God, but what happens when the really painful stuff happens in our lives?” he asked. “You don’t have to take the easy road in worship and Christian music and just write about what’s going to make us feel good.”

Don’t expect typical Sunday worship lyrics—Crist wades through tough questions asking God if He’s turned his face from us, if His grace is still strong enough and if He still looks down in love. Not exactly “Jesus Loves Me.”

But he doesn’t stop at the questions.

“It’s not like the Bible doesn’t have these sorts of questions,” he said. “There are some brutal questions in the Psalms and elsewhere. But there are lighter songs that will be on the record about hope in God and feeling great because He loves us just as we are.”

In the same way their upcoming album doesn’t take the prototypical worship path, the band tries to ensure their live show doesn’t get lumped into the myriad of rock concerts people may attend. Crist explains that their sole purpose of playing is to worship God and have others join them as they leave space for Him to speak.

“We don’t want big flashing lights up there,” he said. “When we play we want to worship and all of that stuff is just counterproductive.”

And he couldn’t be more eager to share their new offerings under dim lights with hands held high.

“I’m way excited about what I get to sing about for the next couple years,” he said. “These songs are worship-oriented songs, but lyrically they talk about a lot of things you don’t hear in modern worship songs. I feel that’s right where our generation is at and what they’re connecting with.”