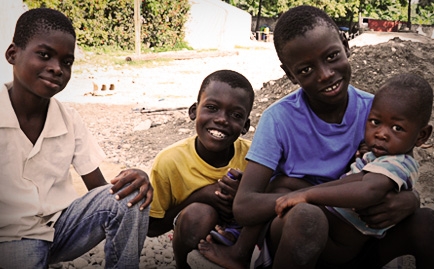 A red rusting door, propped open, leads to a dusty courtyard. Littering the ground are piles of worn colorful shoes, once vibrant but now faded and soiled from the places they have roamed. Ahead, two cluttered cement rooms with bunk beds and suitcases offer a meager space for the little bodies that occupy them. Tiny shirts and undergarments flap quietly on the line overhead in the warm, almost still Haitian breeze. Several children sit around, some staring at their feet as they draw lines in the dust. Others play with sticks and a deflated ball. A young girl crouches by a trash pile, sweeping discarded items into a broken box.

Scribbled on the door leading into the orphanage in what looks like chalk, reads: "Time and tide never wait for no men." A telling string of words, framing the figurative window of this unfolding, epic crisis.

I’ve witnessed this scene all too many times. The orphan problem in Haiti is like a slow, delayed labor—potential nearing birth, with no place for it to be born. Their voices echo in the narrow hallway called life, crying out, waiting to be discovered—deserving of much more than they can be given.

Of all the tragedies to be realized after the crippling earthquake in Haiti last year, the amount of orphans left in its wake is perhaps the most heart-rending. Before the disaster, nearly 440,000 children were thought to be orphaned in Haiti. It is almost impossible to know now how many more the country has absorbed after Jan. 12, 2010.

The word “orphanage” must be used loosely here, for the standards we have come to know in the Western world have minimal presence in places like Haiti, where children are growing up in dilapidated and shabby buildings, tucked away off pothole-riddled paths, with little signifying their existence as facilities providing care.

Not all children are orphans in the literal sense of the word. Vulnerable children are dropped off by parents who have lost the ability to provide adequate care for their children. Some come to visit still. Others disappear forever, washing their hands of their child-rearing responsibilities. In several of the orphanages in Titanyen and Cabaret, administrators receive five to 10 calls or drop-ins a week from parents begging them to take in their children. “There is this sense of urgency and need to offload their burdens. It is tragic,” says Jean, an orphanage administrator.

What is worse: growing up as a burden to a family who cannot clothe you with physical and emotional care, or being a citizen in a country who has historically no regard for you? The tragic reality is that Haitian orphans often have to contend with both truths.

Most of the orphanages in this area are privately run by local organizations, churches or individuals. Sadly, running an orphanage has become a popular business in Haiti, and the supply cannot keep up with the demand. Children are easily thought of as resources for the gaining, and more often than not it is a losing battle as even their most basic needs remain unmet. It seems the “lucky” orphanages are those who have found the favor of an NGO (non-governmental organization), a church from the States or a grassroots group fulfilling their mission to care for the least of these. Orphanages relish such support, and are far better off for it. But a majority of Haitian orphanages will never gain visibility, and even less will be afforded the opportunity to be taken under the wing of a first-world entity with promising resources.

It is one thing to read statistics about Haiti’s expanding orphan crisis, but it is quite another to witness it; to walk down a squalid dirt road and visit several overrun orphanages within a few minutes of one another, each with greater need than the last. Wide eyed, hungry, soiled. Each humble face tells a different variation of the same story. It is unsettling and overwhelming. And it feels harshly unjust.

What does it mean, then, to be a Christian in the midst of a swelling sea of abandoned children, a trend that shows no sign of slowing? How do we live out the following charge from James: “Religion that God our Father accepts as pure and faultless is this: to look after orphans and widows in their distress and to keep oneself from being polluted by the world” (James 1:27).

Why Do We Get So Many Christmas Story Details Wrong?

A life marked by servitude calls for ongoing, significant engagement. We cannot turn a deaf ear to the mounting problems in the developing world, for we are held accountable for what we have seen and what we have heard. God continually calls us into ministry with the poor, and it is our responsibility to flesh out what our role is in that.

We must also remember there is a greater story being played out in all of this. If God’s redemptive love can’t enter into a broken place such as an orphanage in Haiti, than where else can it be found?

As we respond and reach out to the hurting, we are promised that there is something more enduring in all of this, and it is within us. His love will light the way in the darkness, through the hardships in places like Haiti.

And like time and tide, it will not wait.

Roseann Dennery resides in Haiti and works with the faith-based relief and development organization, Samaritan’s Purse.

Who Would Jesus Bully?

Why Doesn’t Anybody Talk About Sin?