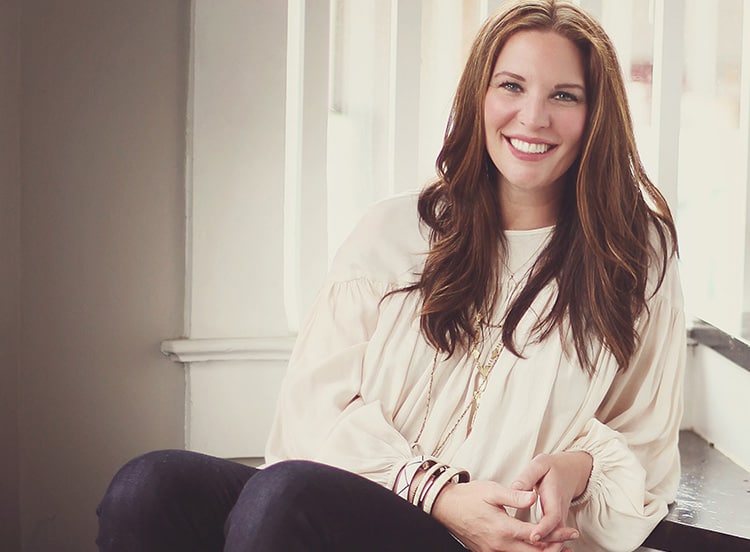 If there’s one thing Christian subcultures love, it’s buzzwords. These change from time to time—think “kingdom” and “missional” in the early 2000s and “vulnerable” and “intentionality” more recently; the list could go on and on—but the idea is the same: Solid, meaning-heavy terms slowly become catchalls for spiritual-sounding stuff. We can pretty easily add “authenticity” to our list of Christian buzzwords.

Just take a look at social media and you’ll see “authenticity” thrown around so fluidly, it’s hard to tell if it means much more than stressful life stages or even messy hair. But Jen Hatmaker is out to reclaim it.

In her new book, Of Mess and Moxie, the bestselling author tackles head on the tensions Christians often feel between putting on a got-it-all-tother show and contributing to the I-can’t-even zeitgeist. We talked with Hatmaker recently about her book, handling criticism and, yes, authenticity.

From setting out to write Of Mess and Moxie to the time you finished, how different is the finished product from your original vision of it?

There’s this quote by Henri Nouwen that I love and I keep it on my desk. He says, “I do not yet know what I carry in my heart, but I trust it will emerge as I write.” I have found that to be really true with my experience as a writer—that even going into a project like Moxie, which had a pretty decent structure already, there is an element of mystery in every writing project where sometimes the process of writing leads my thoughts and my heart and my soul into territory that I didn’t plan for.

It’s almost like how sometimes fiction writers talk about how their characters write their own stories without their permission. I feel that sometimes even as a nonfiction writer that sometimes the stories and the truths and the ideas begging to be brought forth are just going to write themselves with or without my permission. In every book I’ve ever written, there are passages, paragraphs, sometimes entire chapters that I did not expect to write but emerged as I went. And I’m always glad for it.

Is there a part of the book that you are particularly proud of, one that you feel came together a little bit cleaner or more inspirational than the rest of it?

The last essay in Moxie is called “Rewoven” and I didn’t expect to write it the way it came out. But I am so glad that I did and I’m so glad that it’s there. In it, I talk a little bit more about our personal suffering, more than I’m comfortable doing honestly. Then I dove into a subject that is thorny for me: this whole idea of God’s sovereignty, and how in the world He is redeeming humanity.

Why does He move when he does? Why does He stay his hand when He does? What role does prayer have in it? You know, when you’ve got two faithful people who pray with equal confidence and expectation and He moves in one and not the other.

I have always struggled with the canned explanation of God’s sovereignty I typically received from my Christian community. The Church thus far has just been, “I’m just not going to talk about that; I’m going to avoid it and we’re just gonna talk about Southern football.”

But in this case, in this essay, I really walked through what I felt like was a bit of a vulnerable discussion of my struggle with the concept: What I am prepared to say I think I understand and what I am prepared to say I will never understand. In fact I even mentioned in that chapter that my fear of writing it was being placed outside the camp for even asking the question.

But I remembered what Bob Goff said one time: “There are no camps, we have nothing to join except Jesus.”

You’ve done a fair amount of writing that has rankled some people. You’ve received a lot of critiques online, some of it hopefully constructively and graciously and obviously some of it less so. Have you found a good way of managing the haters?

What’s funny is when I started my career as a writer, I probably had some of the thinnest skin you have ever seen in your life. I’m a lifelong, chronic people pleaser. Human approval has always very disproportionately mattered to me in an unhealthy way. So it’s hilarious for me even to remember because now that’s my daily bread.

God has done a real work in me. Growing me up into this space to be this sort of leader who does not melt on a warm day. I handle online criticism in a handful of ways:

Every single time, it feels different the next day. When I can wake up the next day and the shock or the hurt feelings or the rage has receded, I can see it way more clearly. And so at that point I can usually sort this out: Either this is trolling and not useful and I’m going to absolutely put it in the trashcan and shut the lid, or there’s something here. There’s something here to listen to, to learn, to apologize for or clarify or explain or even just engage in dialogue. I can usually tell which is which by the next day.

Related, what is the right way to go about authenticity? Is there a balance between being a jerk and being fake?

I think authenticity online certainly can swing from one extreme to the other. And neither are actually any good.

There’s this fake authenticity that is like low-hanging fruit: Anybody can post a messy picture or something that’s like, “Oh i’m just a real person”—which is all true; everybody is a real person. But there’s a brand of that type of transparency that has some real quick rewards. But it doesn’t cost you anything, and you can still hide everything substantial behind that barrier.

And then you can swing the other way, where you put too much on display. There is no censor, there is nothing held back, there is absolutely nothing off the table of public consumption. That’s just as unhealthy and exhausting to have to digest from somebody all the time.

There’s something in the middle that feels right to me, where your authenticity is going to cost you something. It means in certain areas, where it’s wide and prudent, you are going to peel back the curtain a little bit and reveal something hard, something that involves struggle or loss or failure. Those aren’t the things we like to share. This brand of authenticity creates a space for other people to say, “Me too, I’ve done that,” “I struggled with that,” “I’ve failed in the same way.” I think that’s good for the community.

What is one thing you want readers to leave Moxie reflecting on, what are you hoping this inspires people to think about and meditate on?

I hope the word they walk away with is “moxie.” The idea of that word is old fashioned and it pulls forth all these images of grit and courage and pluck. That’s primarily what I see in my generation, even though there’s a lot in the book that deals with mess. “Mess” includes all of the things we all endure, suffering and pain and grief and failure and loss. This idea that as believers we are simply seated with a spirit of overcoming it is in our namesake.

What I hope that readers will walk away from is a reminder that no matter where they are at right now, they have the spiritual tools they need. Because we serve a god who will not be shaken.

Jesus Didn’t Need the Approval of Others

The 4 Faith-Shaping Books You Should Read Next