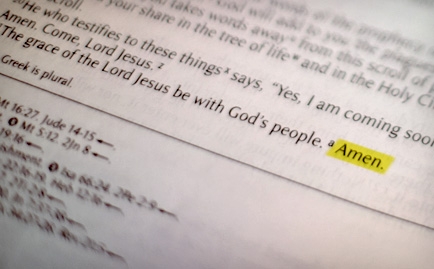 I once passed a church sign that read: “God said it. We believe it. That settles it.”

I held the words in my mouth like sour milk. “That settles it.” Is it that simple?

Every group has its jargon. Christianity especially has its own catalog of unique phrases. In order to become better communicators and defenders of our faith, as well as grow in our appreciation for the Scriptures, we need to learn to unpack our jargon—especially when it’s a widely used and misunderstood phrase straight from Scripture.

You or people you know have probably referred to Scripture as “God-breathed.” If asked what that means, we say, “The Bible is God’s Word.” If pressed for further explanation we might answer, “God wrote the Bible.” But the trouble is many Christians are stuck running in circles with stock answers. They have difficulty hearing themselves from the perspective of someone who is unchurched. All of our talk about God writing the Bible has the potential of conjuring up the image of a caricatured god sitting at a celestial desk with his quill, ink and eternal scroll. Is that an accurate depiction of “God-breathed”? If not, then what is?

Both Human and Divine

“God-breathed” essentially equates to “God-authored,” and there are two extremes when it comes to the authorship of the Bible. One extreme stresses the Bible’s divinity, but ignores its humanity. This view is quick to point to God as the author of the Bible, but squirms at the mention of any human involvement. The other extreme stresses the humanity of the Bible, but denies any divinity. Those who hold to this view believe the Bible is the work of people, apart from divine intervention or anything supernatural. Both views fail to establish a balanced view of Scripture.

Thankfully, on the subject of authorship, the Bible speaks for itself. The final verse of Colossians reads, “I, Paul, write this greeting in my own hand,” and Paul confesses in 1 Timothy 1:15 that he is the “worst” of sinners. Although it makes some people uncomfortable, the Bible testifies to the fact that Scripture was written by men—flawed men.

But the Bible also asserts that it was inspired, breathed and authored by God. In 2 Timothy 3:16, we initially find that, “All Scripture is God-breathed.” In short, according to Scripture, the Bible is the Word of God, but written through men.

These men were from various regions, many of them never having met each other or read one another’s writings. Even still, their books and letters, written over a period of 1,500 years, complement and harmonize to form a single narrative. Without a common Editor or Inspiration, this seems about as likely as buying a model airplane, shaking the box and assembling it without ever peeling away the cellophane. It seems the Bible’s very existence, its journey from God’s mind to our bookshelves, should incite more wonder and awe than it’s been given.

In April 2009, Cory Swearingen wrote a letter, stuffed it inside of a bottle and threw it from the shores of Florida into the Atlantic Ocean. After 16 months, the bottle was discovered by a father and son on the shores of Ireland. In a similar story, another message in a bottle traveled 1,735 miles from Seattle, Wash., to the shores of Alaska and wasn’t discovered until 21 years later. Stories like these make headlines because they fill us with a sense of wonder. We’re wowed by the infinitesimal odds; and yet, the Bible’s orchestrated journey through history makes a bottle’s arbitrary trek across the Atlantic look like a walk in the park.

The Scriptures have endured a journey spanning millennia and survived countless attempts to snuff out their existence. Persecution inundates the history of the Church. The Scriptures were often outlawed and burned, but believers continued to make copies of the Bible and committed its content to memory, even though the penalty was often martyrdom. Over the centuries, through the resolve of believers in the face of oppression and through the painstaking and arduous work of transcribing manuscripts, the Bible has persevered. Knowing the story of the Bible, and not simply the stories in the Bible, will serve to make believers better communicators of the faith.

I have a friend, a Muslim friend. We’ve known one another since high school, but back then he was agnostic. Suffice to say we’ve had a variety of conversations about faith over the years, and during one such conversation he said something I’ll never forget.

“It’s not fair. All your answers are in that book,” he said, pointing to my Bible.

Today’s Devotional: To Be Someone Else’s Best

He was right, in a way. Although the Bible doesn’t explicitly answer every question one might have, it’s certainly fundamental in sharing our faith and answering questions surrounding our tenets. That being the case, we must not only be well-versed in Scripture, but we must have a firm grasp on its rich history and the integrity of its origins.

Perhaps it was a parent or Sunday school teacher who first introduced you to the concept that the Bible is the Word of God, and maybe you decided to believe them. This isn’t a bad thing, except that many believers entrench themselves at this point and refuse to advance any further. It’s like setting out to climb Everest and never leaving base camp at the foot of the mountain. We learn the jargon, arm ourselves with Bible verses, but oftentimes we fail to excavate the extraordinary stories underneath the surface. Our lack of curiosity is disturbing, and ultimately unproductive.

In his book Farewell to God, the late agnostic author Charles Templeton referred to the Bible as “embellished folk tales.” Not only is Templeton’s statement erroneous (archaeological and historical evidence have served to strengthen the Bible’s credibility), but it emerges as nothing more than emotionally charged criticism.

Let’s not make the same mistake as Templeton by reducing the conversation to similarly emotionally charged defenses. As we thoroughly and lovingly study Scripture, we’ll find it much more complex than our pithy phrases can summarize. Just as God entrusted the hands of men to write His Word long ago, He is entrusting the tongues of men to share it today—and it’s a responsibility we can’t afford to leave to jargon.

Sean Bess is a freelance writer living in Birmingham. He blogs at http://wastebaskets.tumblr.com/.

Sean Bess is a freelance writer living in Birmingham. He blogs at seanbess.tumblr.com. You can also find him on Twitter (@SeanBess).