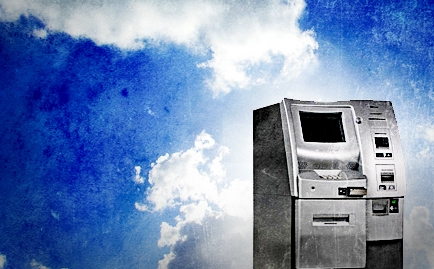 Given my druthers, I’d rather reside in a mansion carved from marble than a trailer home. Still, I know without question that God’s love for me or his favor toward me is not manifested in whether I live at the end of a dirt road in a trailer or around the emerald bend in a gated community comprised of McMansions. Proof of God’s love is not found in the square footage of our homes or the number of cars our garage will hold. God’s love is not evident in our net worth at all. It’s found in the same place it has always been, at the foot of a rough-hewn and bloodied cross.

Now for those of you raised up reciting the books of the B-I-B-L-E and doing the hand motions to "Deep & Wide," the very suggestion that God’s love can best be summed up in a yearly financial statement might appear like some sort of newfangled math. (Maybe it’s the exact same math they’ve been using on Wall Street and in the Securities and Exchange Commission lately.)

But there are a lot of folks prancing around treating the Bible like an algebra book and God like their personal banker. They figure if they can do the equation just right, they’ll earn God’s approval and he’ll hand over the keys to the great vault of heaven. Then that abundant life mentioned in John 10:10 will finally be theirs.

I was reminded of just how skewed our thinking is about an abundant life while roaming through a bookstore in Salt Lake City’s airport one afternoon. Every which way I looked were copies of The Secret by Rhonda Byrne.

I didn’t know much about the book then, but I heard a woman say it helped her understand why she had been able to amass so much success and wealth in her life—she had attracted it all to herself. She had called forth all the goodness of the universe for her own good pleasure, and the universe had responded because it was honoring the power of her good energy, just the way The Secret promised it would, because, well, that’s the power of the law of attraction, as purported by the book. Its real magic lies in the fact that the law is at work whether we acknowledge its powers or not.

The cold truth about The Secret is that it’s a blazing lie. One that Baptists, Pentecostals, Mormons, atheists, and agnostics have been buying in bulk. Consider this for a moment: If a person’s worldview presupposes this so-called "truth" then the corollary has to be true as well, doesn’t it? That any bad thing that comes our way is our own fault.

It’s a perfect theology for people with means. We convince ourselves that we deserve prosperity because we’ve worked hard for it. We deserve it because of our faithfulness to God. We teach our children that we have earned God’s good favor and that’s why we’re so rich, so healthy, so pretty, so smart and so free to do as we please.

However, it’s a terrible theology for the poor and downtrodden. When times get hard it must mean God is put out with us. We’ve been unfaithful or otherwise not measured up. When we get cancer or lose our jobs or homes, well, it must be that we deserve that too. And if someone in our family dies, well, that must be the result of some really major sinning on somebody’s behalf, right?

Exactly how does the law of attraction apply to the woman who’s been raped or the veteran who is homeless? Or the daughter who grows up fatherless? Did these people somehow invite tragedy into their lives?

We Americans want to believe that God loves us best of all and that all of our nation’s riches are the result of our faithfulness to God. We also have a tendency to think that our nation’s ills have come about because God has to punish all those people misbehavin’. It’s just a heap of nonsense served on a silver platter.

There are those who’ll disagree with me, some vehemently, but I believe that whatever blessings we enjoy may be more the result of good geography than good theology. We just happen to live in a place that for the most part has been spared the sort of droughts and freaks of nature that can decimate a country and a people for decades to come. Let an event like Katrina unfold and you get some idea of just how badly things could turn for all of us, in an instant.

It is not my intent to widen the already looming abyss between the haves and the have-nots. Greed is not a respecter of people. It threatens all of us, regardless of how many plasma TV’s we may or may not have.

Having been there, I can tell you, there’s nothing intrinsically good about poverty. It can, and often does, create a good deal of strife among families, communities, and nations. There are a lot of ills associated with poverty—increased rates of domestic abuse, child abuse, alcoholism, drug use, teen pregnancy,and illiteracy, to name a few. God forbid that I do what so many other authors have done and romanticize poverty.

There’s nothing romantic about having to hitch a ride to work because your car broke down and you can’t afford to get it fixed, and the nearest bus stop is two miles out yonder.

As the proud owner of a very fine running BMW myself, I know that the tiniest amount of wealth can inoculate a person to the daily struggle for survival. But having money does not immunize a person from compassion. There are plenty of people, Christian and otherwise, who are using their means to create a better world for a whole host of people. Bono comes to mind, Bill and Melinda Gates. Truett Cathy. Oprah. Rick Warren. We live in a nation full of good-hearted people, people eager to help.

As my buddy Jack Pendarvis once told me, "I may not be rich, but I lead a rich life." There is a huge difference between the two. So whether you live in the double-wide or in the van downtown or behind gilded gates of your own choosing, my prayer for you is that you lead a rich life and that you, too, will use your gifts, material or otherwise, to be an Ambassador for Christ.

This article is adapted from Will Jesus Buy Me a Double-Wide? (‘Cause I need More Room for my Plasma TV) by Karen Spears Zacharias. Copyright Zondervan, 2010. Used by permission.