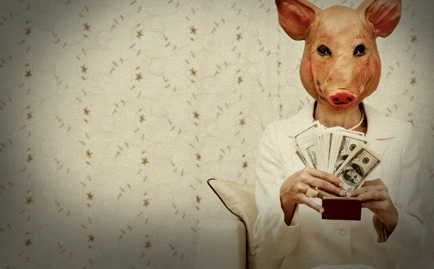 Gluttony is one of those ambiguous seven deadly sins—a warning for people who eat too much. Not really something most of us think about on a regular basis. But it’s a sin of gauntness more than obesity—a sin that affects most of us more than we could ever guess. And it’s a sin that had its start in the Garden.

The refusing to eat the fruit—which Adam and Eve may have done for many years—had been the primary demonstration of their love for God. By declining the poisoned fruit, Adam and Eve affirmed daily that the world God had made was good, that they desired inclusion in the life God gave them and that they cared for their Maker.

Conversely, eating the fruit was a rejection of God, His world and a future married to Him. More than anything, eating the fruit was an act of divorce. Like adulterers seeking a new lover, Adam and Eve did not need the fruit hanging in the middle of the Garden. It was excessive. They chose it for an extra measure of satisfaction.

Thus, the event in the Garden was not about sex or violence. It was not even about pride, as some have argued. Eating from the tree of the knowledge of good and evil was an act of gluttony. Adam and Eve took far more than they needed. They believed they could do whatever they wished with God’s creation for their own pleasure and benefit. These gluttonous desires drew humanity into the nothingness, and it took their lives.

Notice how this deadly sin destroys. Gluttony is not about obesity; gluttony is about what we unite ourselves to. Gluttons wed themselves to meals over and above what is good for them—and by devouring more and more, they have less and less.

The truth is, some who are physically overweight are not gluttons at all. They may have low metabolism or glandular problems or a job that requires them to spend all day sitting at a desk. More surprising still, an 80-pound anorexic may be a raging glutton. Weight is not a sure indicator of this sin. The skinny suffer from gluttony as easily and as often as the stout, for gluttony is, first and foremost, excessive. Gluttony is immoderation, and immoderation is not about having body fat; it’s about having a gaunt soul. But like all expressions of sin, gluttony is primarily about separating ourselves from others.

Jesus didn’t command the ascetic life, but He certainly didn’t frown on it. He once said, “Where your treasure is, there your heart will be also.” Follow the money in Western culture, and you will find some of the shallowest and most worthless homes for our hearts. It has been noted in several studies that if American Christians gave away the traditional 10 percent of their income (rather than the current average of 2.6 percent), in a short amount of time the extra giving could nearly eliminate world hunger and unclean drinking water.

The excessive lifestyle of just American Christians—very few of whom lack basic provisions—is indirectly starving the rest of our planet. The question, in light of our own gluttonous tendencies, is how much do you and I really need? What is a healthy basic lifestyle, and what is simply excessive?

When gluttony takes root in our hearts, it divorces us from the life that God has made good. It demands over and above what is natural. Immoderation is a lack of balance.

Sin entered the world through the body of a man and a woman. And it would take the body of another man to remove it.

In ancient times (and even today), rulers made images of themselves—normally statues or currency—and placed them in far-off cities so everyone would know what they looked like. We see this idea in Genesis 1. After God created the world, the last thing He made was a man in His own image. He placed him in the middle of His creation. Adam would reflect God’s likeness for the whole world to see. The Gospel writer Luke even called Adam “the son of God.” But God’s image had cracked. Adam, Eve and their children failed to fully reflect the God who made them, and all the ideas about God became confused. No one knew who God was anymore.

Jesus was the new Adam, the last Adam necessary. Jesus picked up where Adam had failed. In the wilderness, Jesus was tempted by another serpent. Looking at each temptation, we notice that all of them are invitations to Jesus to destroy Himself—through separating Himself from God’s call, jumping from buildings and kneeling to evil. Like a nearby tree with forbidden fruit, these three temptations followed Jesus for the rest of His life on Earth. They accompanied Jesus even to His last hour.

What to Do When God Is Silent

Yet by abstaining, Jesus did what Adam could not. He would be raised up so the world could see God again. On the night before His death, Jesus entered a new garden to wrestle with the same temptations that had been Adam’s downfall. As with Adam, Jesus’ thoughts were directed toward a tree. The question was not whether He would eat its fruit, but whether He would drink its cup. God’s Spirit led Jesus to this garden not to escape the world but to restart it, to be a new kind of human. Like gluttony, this event would take place in and through Jesus’ body. But instead of indulging self, Jesus would give Himself for others.

It was an opposite and counteractive feat.

In Jesus’ flesh, the hole in God’s world would be mended. It would not be easy. In fact, Jesus prayed for God to take this cup from Him. Yet the curse was firm. God told Adam and his descendants, “By the sweat of your brow you will eat your food until you return to the ground.” And as Jesus thought of the tree from which He would hang, He began to sweat. The thorns and thistles of the sin-infected Earth would soon pierce His brow, and then His body would return to the ground. Like Adam, Jesus would receive into His body death, evil and all that separated humanity from what was good. But unlike Adam and his children in whose bodies sin lived, through Jesus’ body sin and its fruit would die.

It was then that Judas led the chief priests and temple guards to the Mount of Olives. Those with swords led the Son of God from the garden—like Adam before Him. In the morning, Jesus was raised over the Earth, and as God had worked for six days to create the world, so Jesus hung on the cross six hours to restart it. Nailed to the cross, forgiving His killers, suffering for His beloved, Jesus succeeded where Adam and all of his lineage had failed, for on the cross all the world was again able to see God.

With Jesus’ limp body hanging still, a soldier took a lance and pierced the flesh next to Jesus’ heart. Jesus did not move—He was dead. Adam, too, had fallen into a deep sleep in the Garden, and God, in the stillness, had reached into his side and removed a rib. From that rib God fashioned for Adam a beautiful companion. And as the soldier’s lance slid from between Jesus’ ribs, “a sudden flow of blood and water” burst from Jesus’ side. From that blood and water, Jesus would make for Himself His own eternal bride. In the ancient creation account, God made human beings on the sixth day—on Friday. A new Friday had passed, and as in days of old, God looked on that Friday, and He saw that it was good

Adapted from Seven (Zondervan, 2008).  Used by permission. A portion of this adaptation appeared in the Sep/Oct issue of RELEVANT.