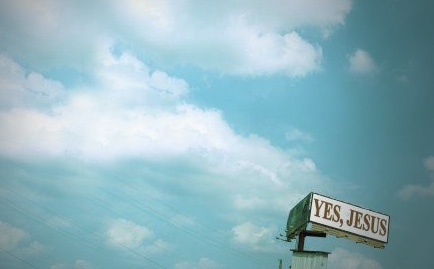 My wife and I were traveling across the United States for the second time in six months—in separate cars (I was driving a moving truck) but linked by walkie-talkies.

I grew up in New England and, while I’d spent time on both coasts, up until that year I hadn’t explored too much of the geography between the two shorelines. I think we were making our way eastward across Oklahoma when it came into view—a huge white cross on the side of the road, visible for several miles in either direction because of the flatness of the landscape and the clear weather. As we drew closer to the cross there in Oklahoma, I could see “JESUS SAVES” painted in large red letters on the horizontal bar.

The huge cross (along with some church signs) got me thinking. I wondered if anyone ever decided to follow Jesus after seeing one of these giant, roadside crosses. I mean, there’s not much there. I wondered about what might go through a person’s mind after glimpsing one of these monuments. Jesus saves; true, but how? And from what? And what difference should it make to me? It just didn’t seem like drive-by evangelism was the way to go. Think about it; can you picture the scene?

“Yeah, I had just finished beatin’ up some old lady—stole her purse and some jewelry—and I was headed back to pick up my live-in girlfriend at the abortion clinic, but she wasn’t out yet, so I decided to rob an orphanage (since I had some time to kill and all). As I peeled out of the parking lot and turned onto Interstate 40, there it was … a big ol’ cross and the words “JESUS SAVES” in humongous red letters. That was all it took to change my life. Why hadn’t anyone told me that before? I pulled off into the break-down lane, knelt down on the side of the road by mile marker forty-two, and surrendered my life to Jesus. In fact, I decided to become a missionary right then and there.”

And then our fictional disciple would sigh, lamenting,

“If only I’d seen a bumper sticker with some Christian catch phrase like ‘Real Men Love Jesus’ or ‘My Boss Is a Jewish Carpenter’ years earlier, I might not have made so many mistakes with my life.”

As I read through the Gospels, I am struck by the fact that Jesus Himself didn’t use formulas. He didn’t oversimplify things and He didn’t hand out tracts. Instead, He talked with people, and as He did, He tailored each conversation to meet that individual at their greatest point of need. With one, He discussed living water; with another, the need to be born again. He asked some to give up everything they had. From others, He asked only for a bite to eat. Sometimes He declared God’s favor. At other times, He used harsh and terrifying words. Jesus didn’t proclaim a pre-packaged McGospel from the value menu that could be reproduced in every culture and speak to every person’s heart in exactly the same way.

Paying special attention to the interactions Jesus had with individuals then can be incredibly helpful today. These conversations show us how Jesus related to people just like us; how He saw through the outer appearance and spoke to the person’s unique situation. Without preconditions, Jesus talked with people right where they were. In that intensely religious, traditional Jewish culture, with all its laws and proscriptions and penalties, certain people were to be avoided. But for Jesus, there was no sin too black, no shame too grievous, to keep Him from sharing the message of hope with someone in need.

But here is the incredible thing: This hasn’t changed in two thousand years. God still wants to talk individually with those who desire to know Him. He knows your greatest struggles and He knows mine. He knows our greatest weaknesses; He knows our worst sins … and still He longs to speak words of reconciliation into our lives. These words are the very heart of the gospel itself.

Jesus did not come with bumper stickers or sound bites or with His message scrawled across a giant ornamental cross on the highway. The people He came to save could not be helped with fast-food religion. God made each of us a unique and special creation, and as such we each have our own issues and baggage, our own future to walk through, and our own responses to this fallen world. That is where Jesus wants to meet us—at the deepest point of our greatest need.

This article is excerpted from The Jesus Sessions: Getting Beyond the Bumper-Sticker Gospel (The Wild Olive Press, 2010). Used by permission.

Movies You May Have Missed: Fish Tank

Survivors Still Being Found in Haiti