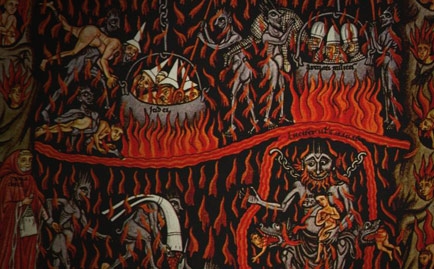 In 2004, a Southern Baptist pastor named Don Piper published 90 Minutes in Heaven, a first-person account of his near-death experience. He was in a horrible automobile accident, was pronounced dead, took a quick trip to heaven (allegedly), and miraculously came back to life. It became a bestseller.
As often happens in Christian publishing, a similar book arrived on its coattails. It was titled 23 Minutes in Hell, and this story was far less uplifting. It told how a California real-estate agent named Bill Weise went to bed one night only to be (allegedly) sent to hell by Jesus, just so Weise could tell the rest of the world how horrible it was.

And it was indeed horrible. The author describes being ripped to shreds by the claws of giant reptilian demons. He sees a literal lake of fire with fountains of magma. He hears the deafening screams of condemned souls. He gags at the awful sulfuric smell. When Jesus finally extracts Wiese from hell, the journey back makes it clear this realm of torture is located beneath the earth’s surface—literally underground. All the hellish clichés are front and center. The only thing lacking is an appearance by a cloven-hooved Satan in a red leotard.

Culturally speaking, Weise’s book sounds about right. Ask anyone—Christian or otherwise—to describe hell, and you’re bound to hear something about fire, smoke, demons, torture, terror, sulfur, the devil, etc. There are no surprises in Weise’s version of hell. It’s the standard hell of the Christian imagination.

But is our imagined hell accurate? That is, does it jive with what the Bible really says? That’s the question I asked as I began researching my book Pocket Guide to the Afterlife. The answers were surprising.

1. The original languages matter. The Bible was originally written in Hebrew (the Old Testament) and Greek (the New Testament), with a dash of Aramaic for good measure. In these languages, four different words get translated into the English word “hell.” They are Sheol, Hades, Tartaroo, and Gehenna. In the King James Version, these words were translated, most often, as the straight-forward “hell.” But that wasn’t always accurate, because …

2. The Old Testament “hell” isn’t hell. It’s Sheol. The Hebrew word Sheol appears 65 times in the Old Testament. The earliest OT books—the Pentateuch, Psalms, Ecclesiastes, Job—use Sheol as an all-purpose term for the realm of the dead. This wasn’t the fire-and-brimstone hell, but was instead a dark, shadowy netherworld. The King James Version translates this word 31 times as “hell,” 31 times as “the grave,” and three times as “the pit.” More accurately, the New International Version (NIV) mostly prefers “the grave” as an English translation for Sheol (see Psalm 49:14). Which is why the English word “hell” doesn’t appear at all in the NIV translation of the Old Testament. Same goes for the ESV, the NASB, and even the Holman Christian Standard Bible translation of my own Southern Baptist denomination.

3. Sheol was for everyone, including good people. All the ancient Jews expected to end up in Sheol—the righteous and the unrighteous. Why? Because that’s where you went when you died. Period. The belief that the afterlife was divided into two opposite destinations, a heaven and hell, doesn’t seem to have appeared until very late in the Old Testament narrative (see Daniel 12:2). And it was still developing just a few generations prior to the time of Christ. The non-canonical Book of Enoch, thought to have been written in 160 BCE, splits Sheol into multiple sections: one for the righteous who are awaiting judgment, and another for the wicked, who undergo punishment while they wait to be judged. Some scholars suspect Zoroastrianism, a dualistic Persian religion, influenced this growing belief in a dual afterlife.

4. Sometimes the New Testament “hell” isn’t hell, either. Sometimes the NT “hell” is translated from the Greek word Hades. It’s pretty much the Greek version of Sheol, a reference to the dwelling place of the dead. In the Septuagint, a Greek translation of the Old Testament, Hades even appears as a stand-in for Sheol. Compare the English Standard Version’s translation of Psalm 16:10 (“you will not abandon my soul to Sheol”) with Peter’s quotation of Psalm 16:10 in Acts 2:27 (“you will not abandon my soul to Hades”). Hades appears 11 times in the New Testament. The King James Version translates it “the grave” only once and “hell” the other ten times. The NIV uses both “hell” or “the depths,” but always with a footnote tying it to Hades.

5. Sometimes hell is only a home for demons. At least, that seems to be the case with Tartaroo. This fun-to-say Greek word is used only once in the Bible, in 2 Peter 2:4. It refers to Tartarus, the dungeon-like underworld in Greek mythology devoted to suffering and torment. Most translations call this one “hell.” But based on the verse’s context, this version of hell suggests doesn’t seem to be a place for sinners. It’s a bunch of dungeon-like holding cells for demons awaiting judgment.

6. A lot of the hellfire stuff comes from Jesus. I tend to think of Jesus as the poor-loving, outcast-accepting, grace-dealing Lamb of God. But he wasn’t shy about describing hell—and not as the ambiguous afterlife of Sheol, but as a place of fiery destruction and eternal punishment. Read Matthew 5:22, Matthew 10:28, or Mark 9. Jesus took hell seriously. When he mentioned it, he used the Greek word Gehenna.

7. Gehenna was a literal, physical place. As Jesus described it, Gehenna involved fire-related torment after death. But there’s a twist. Gehenna is Greek, but it’s based on a Hebrew name: Ge-Hinnom, otherwise known as the Hinnom Valley. This infamous valley was known in the Old Testament as a place where children were slaughtered in ritual sacrifices to the pagan god Molech (see 2 Chronicles 33:6). Jesus and his disciples would have been aware of this valley’s chilling history, but they also experienced it in the present: it had become a garbage dump outside Jerusalem. They would have seen the smoke rising from its constant fires—destructive fires that consumed the trash, animal carcasses, and bodies of criminals that regularly got dumped there. Gehenna was a very real place, and it made a nice object lesson when Jesus talked about what would happen to sinners after they died. There’s no question that his descriptions of hell drew from the reality of Gehenna. The question is how much of it was metaphor.

8. Dante is in the details. While biblical descriptions of hell—or, rather, Gehenna—refer to fire and punishment, the rest of the details are scant. No specific types of torment. No isolation cells. No chains. No demonic whipping. No screaming. Nothing about being underground (that idea comes from Sheol). No devils in Spandex. In fact, these cultural notions about the nitty-gritty of hell probably come from an extrabiblical source: Italian poetry. In other words, blame Dante. His Divine Comedy, an epic poem about the Christian afterlife, describes hell in detail in its “Inferno” section, where Dante gives readers a front-row seat to his imaginative and sadistic punishments. Blasphemers get eternally pelted by flames. Corrupt politicians boil in oil. “Sowers of discord” get chopped into pieces by sword-wielding demons, then heal up, then get eviscerated again. It’s fascinatingly graphic stuff, which is why many critics have suggested that the Christian view of hell (including Weise’s book and Mary Baxter’s A Divine Revelation of Hell in 1997) owes more to Dante than the Bible.

I heard a lot about hell growing up, particularly about how awful the eternal burning would be. I spent too much of my childhood fearful that somehow my salvation wouldn’t take and I’d end up there. The horrors of hell are seared into my psyche.

So I was pretty annoyed to discover the biblical case for the hell of my imagination to be less than airtight. Along with this annoyance came some serious questions. If the fiery Gehenna hell plays such a huge role in the dualism of contemporary Christianity, why isn’t it mentioned in the Old Testament? We have the idea that hell has always been around as sort of an afterlifey counterpart to heaven, but the historical record—and biblical scholarship—suggest the theology of hell evolved over time, from the Old Testament to the New. What’s up with that? Clearly Jesus taught that hell existed, but did he really mean it was a place of everlasting physical torment by fire? Or was that just a rhetorical flourish inspired by the local garbage dump?

My faith doesn’t depend on the reality of hell, of course. But these days, I have more uncertainty than ever about that part of the afterlife. If I’m honest, I have to admit I don’t know what to think about hell. I really don’t.

I’d end this by writing “it’s a hell of a position to be in,” but you’re probably expecting that kind of lame cliché. And if I’ve done my job, you already know that clichés about hell are unbiblical.

Is It OK for Christians to Gamble?

How to Go Church Shopping