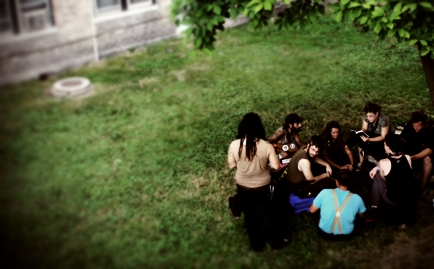 The topic of new monasticism has been gaining popularity with many
evangelicals forgoing a "traditional" American lifestyle in favor of urban,
commune-style groups and intentional communities. From the JPUSA community in
Chicago (the people behind the Cornerstone Festival) to Shane Claiborne
and the Simple Way community in urban Philadelphia, city-based
communities of faith—monasteries—are becoming increasingly common. We
spoke with Jonathan Wilson-Hartgrove, author of the upcoming book The Wisdom of Stability (Paraclete Press) and leader of a new monastic community in North Carolina about
how the movement is growing, why it’s becoming some so popular and what
its prominence says about the Church.

New monasticism has been in the news a lot lately. Why do you think it has become such a popular topic?

I think one thing is that the monastics have taken faith seriously, and
a lot of people are spiritually hungry and have a sense that normal
churches are not taking church seriously. They’re looking to other
places, and the monastics are one place.

What is the draw of twentysomethings to the house-church/monastic movement?

Authenticity is a big deal for most twenty-and-thirtysomethings. I
think the sort of one to one relationships and smaller groups that you
get in a community is attractive in terms of authenticity. I think
another piece is that people are hungry for something that is more than
a one time a week event, but something that they can be part of
everyday.

A recent report shows that some of the major denominations have
seen a decline in membership. Do you think people are looking for a new
way of experiencing faith and community?

There are two things:
One, I think the denominations are concerned about the decline in
numbers and worried about their survival. And some of them are
interested in new forms in order to try to sort of save the Church. I’m
not so concerned with trying to save the Church, but rather with people
finding authentic relationship with God. I think a lot of those people
are looking for new forms and new monastic communities are one place.
Whether it will save the denominations I don’t know, but I do hope it
will give people a genuine relationship with God.

As prominent as new monasticism has become, the Catholic Church
has said that nuns and monks have been on a drastic decline. Is there a
disconnect with the traditional kind of monasticism with today’s
culture?

I think traditional monasticism is so far from most people’s experience
that it’s almost scary. Most people think that the monks are in a
different class or something, but yes they aren’t getting a whole lot
of new members these days. And you know they’re thinking a lot about
that too—what that means for them. What I’ve been saying is that I
think there’s a new
monastic movement that looks a lot more like some of the traditional
orders when they started than now. So it’s sort of in a birthing phase
now and what it will become remains to be seen.

For twentysomethings that want to experience a more
monastic-style life, how can they still have some sort of leadership
and accountability structure when it comes to “church”?

From your research, what has been the most surprising part of the new monastic movement?

Well, one is how old it is. What I found when I started looking into
the history of these communities is that new monasticism is actually
about 80 years old; so it’s not all that new really, but in terms of
Church history I think its still a new movement.

Do you think that monasticism is a kind of antitheses to the megachurch movement and maybe even a counter action to it?

I don’t want to be a critic of the megachurch as a whole, but I think
that new monasticism is a response to individualistic and consumer
driven Christianity, some of which you find in megachurches, but you
also find that in good old mainline Protestant churches that have been
standing in the middle of town for 200 years.

Does your research indicate there has been any backlash to the
political involvement of some larger denominations and evangelical
groups?

Well, I think a faith that is politically engaged is something that I,
and most people in communities are interested in. Now when some
churches have become puppets of political parties, I think there’s some
backlash to that. Whether that is conservative churches backing the
religious right or mainline churches just being sort of a gathering
place for the Democrats, either way I think there’s some reaction
against that.

Chasing the Next Big Thing