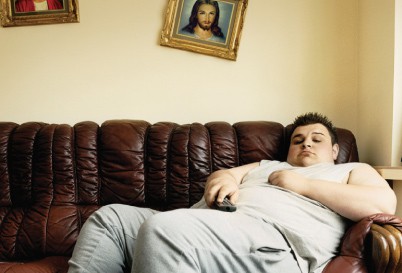 A recent study from Northwestern University’s Feinberg School of Medicine suggests there may be a link between how active people are in their church and how much they weigh. The study suggests that “young adults who frequently attend religious activities are 50 percent more likely to become obese by middle age as young adults with no religious involvement.”

Which begs the question: Why? Matthew Feinstein, who led research for the study, says, “It’s possible getting together once a week and associating good works and happiness with eating unhealthy foods could lead to the development of habits associated with greater body weight and obesity.” Which puts all of those old youth group snacks in a much more ominous light. Chubby bunny, anyone?

It’s not the first time researchers have found a link between faith and fat. A Purdue University study in the late ’90s (which was sent to press under the awesome title “Firm Believers More Likely to Be Flabby”) found Baptists were the most overweight of any group.

The lead researcher speculated that “overweight people may find comfort in religious settings. Temples, synagogues and churches may provide an important source of acceptance in the midst of a society that highly values fit bodies.”

So what can people serious about their faith do to buck this trend? Well, for starters, stop eating so much. Just because someone in your small group brought a couple dozen donuts doesn’t mean you have to indulge.

And yes, there is some good news in all of this: Studies show people who are very religious also tend to live longer and are happier. Though an increased risk of heart disease seems like it could negate the happy …

Is Japan Blaming Sin for Its Crisis?

There’s No Peace in the Middle East