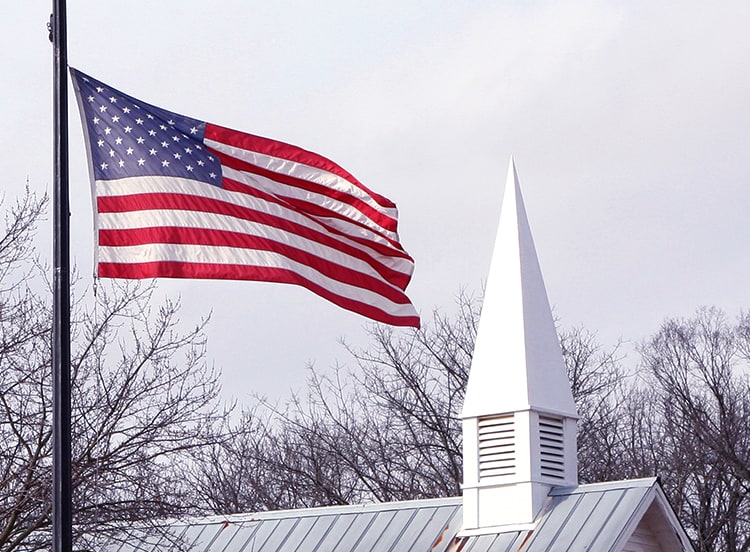 I was sitting in church when the pastor, while referencing the current and very scary state of America, simply stated, “hate groups are on the rise.”

I was caught off guard. I felt something within me tear, like a dam breaking. Somewhere deep inside, my soul was crying, that’s not good enough.

Are hate groups on the rise? Oh, most definitely. They have names. They have evil motives. Both need to clearly be denounced.

Church, please hear me loud and clear: It’s time for us to get political.

It’s time to get too political. Because real politics aren’t able labels; they’re about issues.

I am not talking about liberal versus conservative. I am not talking red versus blue, Republican versus Democrat or Trump versus Hilary. God is not in those divisions; He did not draw those lines in the sand we worship so fervently.

God calls us into the messy and the uncomfortable—for that is where true change takes place. The story of redemption Christ wants to write involves you and me taking an active role in the hard work. There is no middle ground here. If you find yourself wanting to straddle the line on race issues in America—ask yourself why. Ask yourself what gospel you are living by.

Hate groups are on the rise. Specifically, white supremacists. Neo-Nazis. Domestic terrorists. Nationalists. Our current president responded to the events in Charlottesville by saying there were “many sides.” There are not many sides. And as Christians, we should make clear which side we are standing on. Which side Jesus would be standing on?

Maybe Facebook isn’t your thing; we aren’t all called to be social media activists. But we are all called to be advocates of justice. That means speaking up for the oppressed, denouncing hate and pushing forward in the name of love. That means being OK with getting labeled “too political” from time to time. That means embracing hard conversations, saying the uncomfortable words and asking the questions you’d rather avoid.

These are evils that need to be named by Christ followers; there are gospel truths in this discussion we need to be reminded of. No matter how uncomfortable it may make some—no matter how “too political” some will claim—we need to begin.