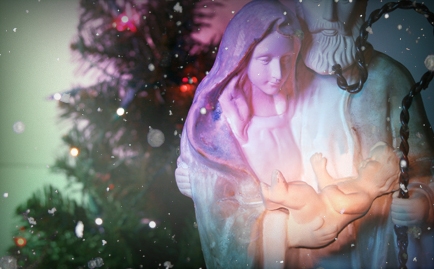 Christmas. It’s all about the good times: family and friends,
candlelight services, stockings, mistletoe, rampant misinformation. Few
holidays are more tangled up in folktales, urban legends and outright
unbiblical ideas than the one celebrating our Savior’s birth.

Not
that we talk about it all that much. Disputing the time-honored verses
of Christmas carols or exposing the errors of the children’s living
nativity scene is a good way to get a Yule log to the head. It’s
practically Scroogetastic. Nevertheless, here are a few things you may
not have known about your favorite Christian holiday.

According to biblical scholars, it’s unlikely that the Christ child
arrived on the day we celebrate Christmas—or even during the winter
season. For one thing, we’re told of shepherds “keeping watch over
their flock by night” (Luke 2:8). Decembers in Bethlehem are cold and
regularly drop below freezing once it gets dark, which means most
shepherds only “kept watch” in the field from April to October. In the
winter, they sheltered their flocks and stayed inside.

And that census decreed by Caesar Augustus? It required travel, and
no self-respecting governing authority would ever schedule such a major
undertaking during the winter months—when bad weather, muddy roads and
angry citizens would foul things up. Nope, these usually took place in
September or October, after the harvest season.

Celebrating Christ’s birth on Dec. 25 was popularized in the
fourth century as a way to steal the limelight from the winter solstice
and its link to pagan feasts celebrating the Roman sun god and the
Persian god Mithras. Most scholars think Jesus was born toward the end
of September. And for those of you keeping score at home, it was
probably the year 6 B.C., not 0 A.D.

These guys are fixtures of the nativity scene. They show up at the
manger accompanied by camels, and are usually dressed all glittery and
stuff because they were kings. Christian tradition has even named them:
Gaspar, Melchior and Balthasar. Funny, then, how none of this is in the
Bible.

Matthew 2 tells us about the “wise men from the east.” Following
the star and looking for the King of the Jews, they make it to
Jerusalem, where they have a run-in with King Herod. Next stop is
Bethlehem. There, they find Jesus—whom Matthew describes as a “young
child,” not a baby—with his mother in a house. Yes, a house. Not a
stable. No mention of a manger.

No indication there were three of them, either. That’s just an
assumption we make because Matthew 2:11 details the three gifts of
gold, frankincense and myrhh. But there could have been a dozen of
these guys, for all we know. Nothing about camels or flowing capes or
sparkly crowns. Nothing to indicate they were kings. In fact, most
scholars figure they were astrologers. And since the passage specifies
them meeting the “young child” in a house, many believe the Wise Men
didn’t deliver the gifts immediately after the birth. It could have
been a couple of years later.

So pretty much everything we think we know about the Wise Men comes
from sources other than the Bible. Like Christmas carols. Speaking of
which …

The second verse of “Away in a Manger” is a crock.

The cattle are lowing, the baby awakes/ But little Lord Jesus, no crying He makes…

The traditional second verse of this favorite carol isn’t original
to the song, which first appeared as a poem (containing what are now
the first and third stanzas) in a Lutheran Sunday School book in 1885.
Verse two was added in the early 1900s by Methodist minister John T.
McFarland for a children’s program.

It implies that the baby Jesus didn’t cry when the cows, apparently
peeved at the unorthodox use of valuable manger space, woke him up with
noisy moos. Yet a fairly important precept of Christianity is that
Christ was fully human—and not some blissful, preternaturally calm
superbaby. This means the little Lord Jesus acted like an infant. He
spit up. He peed. He left a few, um, deposits in his swaddling clothes.

Kirsten Powers on Having Grace for the Hard to Like

People who call it “Xmas” are taking the Christ out of Christmas.

Lots of Christians start feeling like martyrs when Christmas gets
abbreviated, believing this is just another way for modern, secular
society to dis our faith. Not exactly. The first letter in the Greek
word for “Christ” is chi. And in the Roman alphabet, chi is represented by this symbol: X. So guess what? Xmas is an entirely justifiable replacement for Christmas,
and it goes back a long, long way. People who use it aren’t demeaning
Christ. Instead, they’re (consciously or not) appropriating a usage
that’s nearly as old as the faith itself. We Xians shouldn’t get so
upset about it.

So this holiday season, when someone invites you to attend their
church’s Christmas program, feel free to point out the errors of their
wise men and angels and the maudlin carols in the background.

Or, perhaps not, Ebenezer. Don’t be a jerk.

Just remember: like many of the tightly held traditions of our
faith, not all of them are quite as biblical as we think. Merry Xmas!

This article originally appeared in issue 17 of RELEVANT.