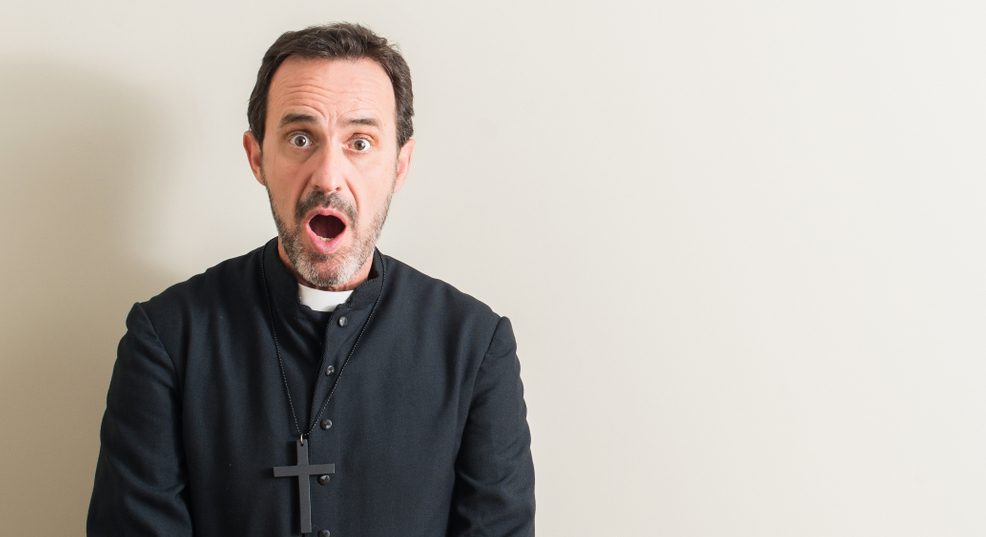 Theology and Twitter … a dangerous mixture. Obviously, everything has an element of theology to it, so it’s impossible to not bring a theological underpinning to your tweets, but when the subtext becomes text, things can get a little messy. Take, for example, the plight of Father Kevin M. Kusick, a Catholic priest and former Army vet. Father Kusick logged on for a very, well, interesting take on women’s modesty in the Church.

Ladies, a priest I know was forced on Sunday to ask a woman at Mass to cover her shoulders. Please help the priest to protect the purity of the men at holy Mass by choosing to dress modestly. The alternative is awkward for all involved. Thank you.

We obviously don’t know the full story here, but there are some curious turns of phrase in here. By what metric was the priest “forced” to ask a woman to cover her shoulders? At what point to Jesus’ words to men whose right eye causes them to stumble come into play here? Could, perhaps, this “awkward-ness” have been avoided via other means than asking a woman to cover her shoulders?

All worthy questions, many of which were brought up in the ensuing ratio Father Cusick brought upon himself.

He was not forced. It was creepy & inappropriate to say anything. And rather obviously, shoulders are not immodest. The msg sent here is that women cannot attend Mass w/o being sexualized, which is gravely wrong. Men need to get it together.

A man’s purity isn’t within a woman’s souls to fix but his own. While I agree we should dress modestly at church don’t blame women for the impure thoughts and actions of men. God gave them free will, a brain, and a conscience.

Actually, Jesus said if her shoulders are causing u problems, it’s on YOU, not her to fix the situation?

“If your right eye causes you to stumble, gouge it out and throw it away. It is better for you to lose one part of your body than for your whole body to be thrown into hell”

And so on and so forth.

For what it’s worth, Father Cusick is very much not backing down, although he’s made it clear he’s not interested in entertaining arguments to the contrary.

By the way: I’m not backing down from this. I’ve thought about it, I’ve prayed about it and i’m not to going to engage in the endless Vatican II style debate that goes back-and-forth constantly and ends up nowhere.

The “Vatican II style debate” referenced here, for what’s worth, definitely ended up going somewhere, but be that as it may. Cusick’s final tweet on the matter was a doozy.