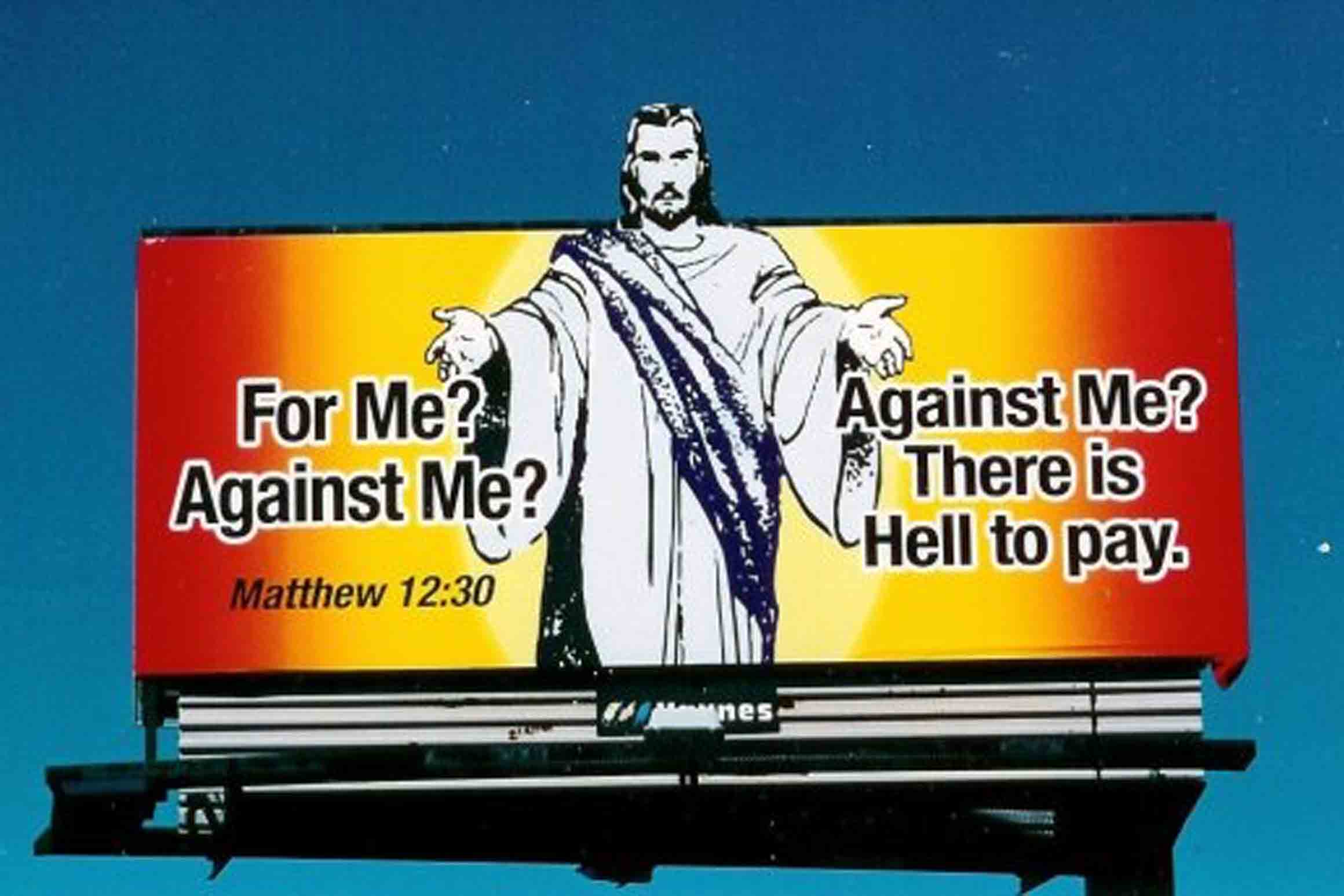 Yesterday, I drove by a church with a billboard that said, “Discover the bread of life or you’re toast.” It’s a threat: If you don’t live a particular way, you will be punished, and harshly punished, probably in a fiery pit of damnation and pain. For eternity.

Here are some other examples of what we’ll call “billboard evangelism”:

There are numerous issues with these types of billboards. The first is how they use church speak to try and reach a population who has no idea how to read church speak. If you were raised in church, you understand the image of Jesus as the bread of life because you have most certainly heard many sermons and pre-communion monologues that discuss this idea. On a billboard, describing Jesus as the “bread of life” removes it from that context and strips it of its meaning, impact and gravitas. It’s like trying to speak to someone in a language they don’t understand.

This goes for many other phrases often heard inside a sanctuary. To the outside world, they just don’t make sense. These might include:

If you were raised in church, you can explain what all of these mean, but you’re not the target audience.

Billboard evangelism also tends to deploy the threat of hell. Given who billboard evangelists are trying to speak to, it’s a poor incentive for attending church or picking up a Bible. Parents know the worst way to motivate their children is by using a phrase like, “If you don’t get in the car right now so we can go to the store, we’re going back into the house and turning up the heat to its highest setting and you are going to receive a spanking, and by the way, this punishment will last forever and you will never get to go to the store again.”

Is that really who we imagine God to be? Is that really who we want other people to imagine God to be? If a Christian really believed the unbelievers in their life were going to spend eternity in hell, that idea in and of itself inspires motivation to reach out to those non-Christians. After all, if hell is real, then about 7 in 10 people on Earth are in serious trouble. Why would we reduce that to a joke on a sign?

And if that’s the case, what’s being done about it?  Why are we making jokes about Hell?

What We Get Wrong About Jesus Clearing the Temple

People might not understand church speak and they might be turned off by images of hell, but people do understand connecting to other human beings. Reaching lost people shouldn’t be left up to billboards, it should hinge on personal relationships.

Church billboards shouldn’t be warnings, they should be invitations: “Come join us.  We think you’re awesome.” And once new people are inside the church, they should feel welcome because of how true that message turned out to be. That’s when they’re ready to hear about the bread of life.

Jake Morrow is a proud dad, a sports and music lover, stuck a little in the 80's and a bit of a comics nerd.

James Gunn On Returning to the MCU: ‘People Have to Be Able to Learn From Mistakes’