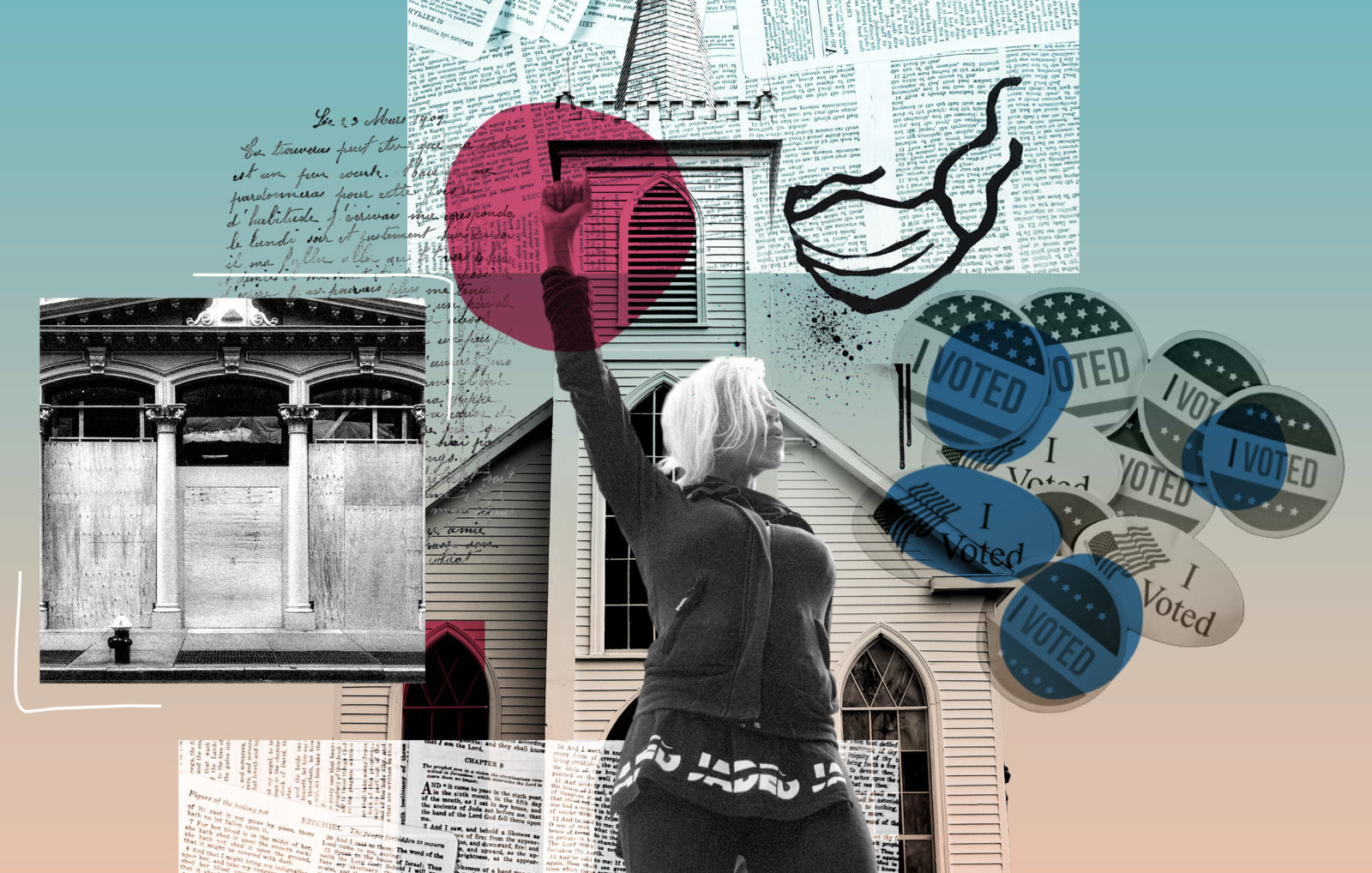 2020 was different for all of us for the same reason. Political unrest, the COVID-19 pandemic and the summer’s Black Lives Matter uprising loomed large over the life of absolutely every American, but the details were intensely different. For some people, the pandemic meant a few months to finish that screenplay or learn German. For others, it meant losing a job, a 401k, or, for hundreds of thousands of Americans, a family member.

For some people, the protests were an opportunity to pick up books by Austin Channing Brown, Ta-Nehisi Coates or James Baldwin and get educated on race in America. For others, it meant intensely uncomfortable conversations with friends and family members who just didn’t get it. And for most of us, it was a little bit of all of the above.

Rick Warren understands the tension. As pastor of Saddleback Church, 2020 has been spent leading one of America’s largest congregations through a season of unprecedented trauma, division, outrage and heartache. In some ways, Warren has spent his career preparing for this sort of challenge. As one of America’s wisest and most prudent faith leaders, we sat down with him to discuss his perspective on the absolute roller coaster that was 2020.

On the COVID-19 Pandemic

Why do you think COVID has been such a contentious issue for the Church in the U.S?

COVID revealed a fundamental weakness in the Church. Most churches only have one purpose: worship. And if you take worship away, you’ve got nothing. They’re in a hurry to get back to worship because that’s all they’ve got.

You could take away one thing, and the church didn’t shut down. We have led over 16,000 people to Christ since March. We’re in revival. We’re averaging about 80 people a day coming to Christ—80 people a day.

Why do you think that is?

We flipped it. We looked around and made a list of all the different problems that COVID was creating. For instance, the first one was food. People needed food. There are a lot of people out of work, and they’re hand-to-mouth, and 126 food banks shut down in Southern California when COVID started, because there was a rush on food. 126 shut down.

Saddleback had three food pantries already up and running. Typically, in a normal month, we feed about 2,000 families. The first month of COVID, we fed 45,000 families.

Then we figured out, you don’t have to have a building. We invented a new way of doing food pantry we called pop-ups. We said, “We’ll come to your school. We’ll come to your neighborhood. We’ll come to your park.” We partnered with every school district in Orange County. According to the recent report I got, over 13,000 Saddleback volunteers have served over 3.5 million pounds of food to over 300,000 families. We’re the largest food distributor in Southern California.

We teach our people that every member of the church is a minister. Everybody’s a missionary too. You’re a witness. Those people already know how to share their faith. When people would pull up they’d talk to them about the Lord.

Of those 16,000 people who have come to Christ, over 12,000 of them have come through personal, one-on-one witnessing by my members. Not led to Christ by my sermons. By one on one evangelizing.

We’re in an unprecedented era of political division; what’s that been like for you? Obviously, many Christians are and have always been concerned about pro-life issues.

If somebody asks, “Is Jesus right-wing or left-wing?” Jesus has an answer: “I’m neither wing.” Jesus says, “My kingdom is not of this world. If it were of this world, my servants would fight.” As the author Hebrews says, “We have an unshakable Kingdom.’

Every dictator dies. Every president gets out of office. The Church goes on. We have an unshakable Kingdom. What we’re called to do has no bearing on who gets elected. I’ve said many times: It’s not who we put in the White House, it’s who we put on the cross that really is our savior. No politician is going to save us. They never will.

What would you say to someone who just wants to throw up their hands and say, “None of it matters, they’re all corrupt”?

The first thing is to realize that everything is more complex than politics makes it out to be. Politics makes everything to be this or that, A or B. There’s no A to Z. So we have to decide what’s the true, nuanced value of each issue. That goes back to being discerning, being wise. We have to know scripture and ask ourselves, “What does God value?”

I’ll tell you one thing, there are over 2,000 verses in the Bible about the poor. How did I go through Christian college, two Christian seminaries and get an earned doctorate without ever hearing anything about the poor?

Nothing about, how do you help the poor get out of poverty? Look up how many times the word justice is used in the Bible, and yet we don’t want to use that word.

In 2008, you hosted Obama and McCain at the Saddleback Civil Forum and talked to them both about issues that mattered to Christians. It was a valuable, educational open forum for both candidates. It’s hard to imagine that happening now. Do you think we’ll ever be able to get back to that level of civil, political discourse?

I don’t want to sound super spiritual, but it’s only going to happen when there’s a revival in our hearts. I honestly think that COVID could be one of the precursors. People don’t come back to God in good times. Go read Judges. Go read the whole history of when things are bad, then we come back to God.

Every other time in history that America has had a disaster, we have banded together. If it’s a fire, if it’s a flood, if it’s a terrorist attack.

When 9/11 happened, the Democrats and the Republicans stood on the Capitol steps together, held hands and sang “God Bless America.” That’s not going to happen right now.

In history, the only disaster that actually divides people is a pandemic because when a pandemic comes, people become afraid. They start becoming afraid of each other. They start tribalizing. They start dividing. “Are you on my side, or are you on the other side?”

Now remember, Christianity grew the fastest in the first 300 years of Christianity. What happened in those years? First, Christians were persecuted. Second, it was illegal to be a Christian. Third, you couldn’t worship publicly. You were likely to be nailed to a cross, or burned on a cross, or  fed to lions. There were no church buildings. Think about that. No church buildings during the fastest period of growth.

There’s another factor that a lot of people miss: In the first and third century, there were two great pandemics in the Roman Empire. Together, they made up the Black Plague. They were death. Millions of people died in those two plagues in the first and third century. In both of those cases, people started fleeing the urban areas because they didn’t know anything about germs or viruses. They just thought, “Maybe it’s in the city.” They were all fleeing the city.

The Church has struggled intensely with this year’s reckoning of racial injustice in America. Looking at our response, it hasn’t been pretty. How can Christians improve our response?

Of our 20 Saddleback campuses, most of those pastors aren’t white guys. They’re Hispanic, Asian, Black. They are Middle Eastern. But when I saw this happening, and the brutalization and racism coming back to the forefront, I thought, “OK, it’s not enough to simply be a multicultural church. We’ve been a multicultural church for 20 years. We have to be an anti-racist church.”

We have to be a pro-reconciliation, pro-justice church. I invited my Black staff to spend time with me. We did a Zoom call and I said, “Guys, I need you to just level with me. I don’t want to hear about when you experienced prejudice and rejection as a kid. I want to hear about how you’ve heard and felt it at Saddleback.”

It was a two-and-a-half hour meeting. It was brutal. It was painful. It was beautiful. It was healing. We all cried together. We did seven staff meetings, over two hours each. They shared their stories, and then I let the staff respond. There was weeping, and there was repentance.

I had a call with all the Black members of Saddleback. People said, “Rick, I love my church, I love you. But many times, I just feel like my church doesn’t understand. I’m the only Black woman in a small group of white women. Not one person has asked me: ‘How do you feel about these shootings?’ I have a son who’s about Ahmaud Aubrey’s age and it scares me.”

People should not be afraid in their own country.

Look, 1619: the first slaves arrive. That’s two years before the pilgrims got here.

Then the other thing I did, I called all the law enforcement officers of Saddleback onto a call. I had about 80 of those. They’re going to be the most resistant. I’m going to go, “Guys, nobody is saying all cops are bad. Nobody’s saying that.” In fact, the worst enemy of a good cop is a bad cop.

I have to say, it got a little heated. Some didn’t understand. But others said, “Thank you for speaking up. There is endemic racism. I’ve been a cop for years. I have seen it.” They’re so afraid of the, “Well, it’s going to tar everybody.” I said, “Guys, you don’t understand, until you speak up and say this isn’t right, people are going to assume you’re siding with them.”

And we did. The trials of 2020 is an opportunity for the Church, and it’s time we collectively stepped up.