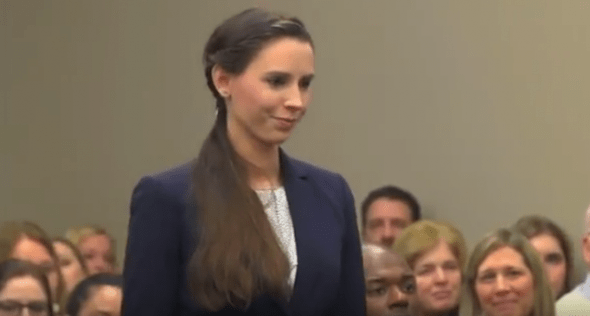 Rachael Denhollander, the attorney and former gymnast who played a huge role in Larry Nassar’s conviction for years of sexual crimes against gymnasts, made a Facebook post about the way the Church deals with abuse titled “When it’s in our own community- Evangelicals.”

And this is where we are perpetually stuck when it comes to abuse, or mishandling abuse, in our own communities. We all say we care. But when it costs, it suddenly doesn’t matter quite enough to bear the cost even of just speaking up.

The test of how much we care is how we respond when we have to reckon with “our own”. Because make no mistake, it is *most* painful when it is in my own community. It costs the most when we speak up against those closest to us. And yet it is within my own community that I am *most* accountable for how I respond.
[/lborder]

She then mentions Paige Patterson’s most recently discovered inappropriate comments while serving as a pastor.

Does that sound like an appropriate joke for a pastor to be making to his congregation? What does it reveal about Patterson’s view of women, that he would think a joke like that about a woman, much less a teenager, was appropriate or funny?

This damages God’s children. It damages the gospel. And it should matter. Even, and especially, when it hurts and costs. Not because we want the church, or the gospel damaged, but because we want it seen in all its true beauty, and this mars it horribly.
[/lborder]

12 Really Effective Women Preachers You Should Know About