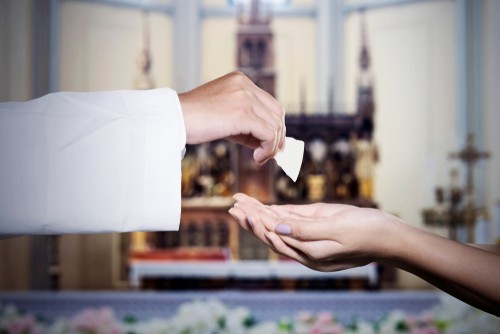 Catherine A. Caimano has written a piece over at Duke Divinity’s Faith & Leadership site about her career as a “clergypreneur” — a priest-for-hire that smaller church communities who can’t afford to pay a full or even part-time leader.

Caimano says she charges a flat fee for Sundays, but is paid hourly for the more relational parts of Christian ministry like education, pastoral care and leadership formation. She says she’s not “in charge” of any of the churches she’s hired for — these tiny congregations run their own churches and must represent themselves in denominational matters — but she handles the ministries that would typically be performed by an official church leader.

Carimano estimates that close to 20 percent of Episcopalian churches can no longer afford to pay a church leader and the reality of shrinking congregation sizes makes jobs like hers a necessity for smaller churches. “Clearly, we need to find creative solutions for congregations to continue to thrive and for clergy to continue to serve,” she writes. “The new vocation of Free Range Priest gives the congregations and the clergy the creative space to flourish.”

She insists that she’s still accountable to the larger Episcopal Church and that “[n]othing I do is outside the realm of how an ordained clergyperson serves” — except, of course, that she does it as sort of an “Uber driver for your spiritual experience.”

Carimano says that around one in 10 clergy work without compensation (RELEVANT could not find a source for this statistic. A 2010 Hartford Seminaries study found that two percent of mainline Protestant clergy are unpaid) and argues that such a model is “unsustainable.”

“If we keep moving toward clergy not being paid, we will soon have no ordained ministry at all,” she writes. “As a Free Range Priest, I now know that there is another way.”

You can read the whole article here.