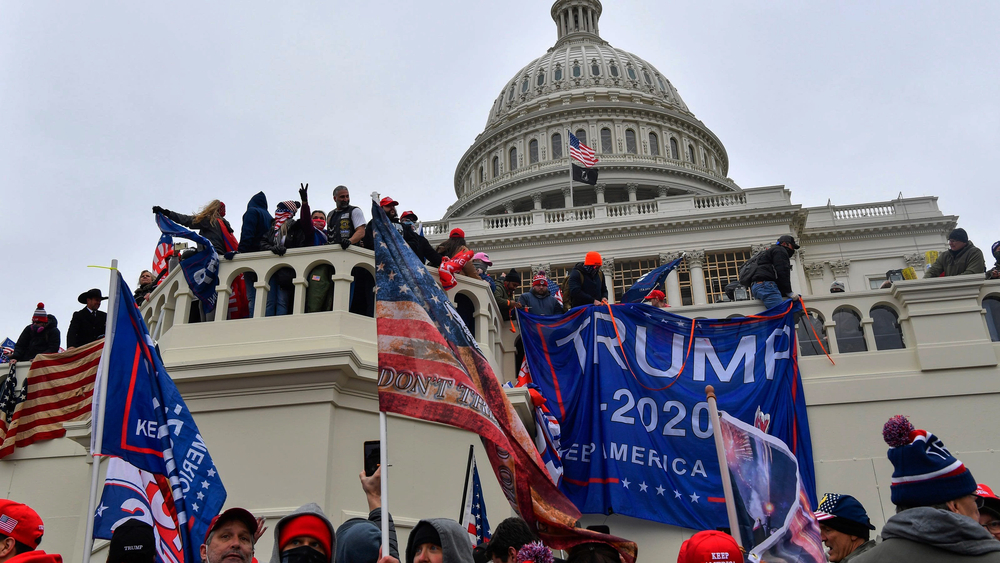 It’s hard to put into words exactly what went down during Wednesday’s mass chaos in Washington D.C., an attempted insurrection incited by the President against sitting lawmakers that left one woman dead after being shot by Capitol police and three others dead from medical emergencies. The word “unprecedented” gets thrown around a lot but it is hard to think of an American comparison here. The buildup to this moment has been long and, of course, predicted but nevertheless, the State of the Union is fragile.

Christian leaders from across the political and ideological spectrum weighed in with their thoughts, which were unusually relevant to the situation. The people who stormed the Capitol building did so with “JESUS 2020” signs, “In God We Trust” banners and one enormous cross. It was a Christian Nationalist endeavor from bottom to top, a violent mob adorned in a pop Christian aesthetic. Christians have a responsibility to speak up against a violent movement LARPing as the Church, and some Christian leaders are doing just that.

In most churches they say racism is a sin, but they never address the guilty parties with church discipline.

I see folks taking the same approach with insurrectionists breaching the Capitol.

I don’t know the Jesus some have paraded and waved around in the middle of this treachery today. They may be acting in the name of some other Jesus but that’s not Jesus of the Gospels.

Via the Gospel Coalition:

But enough is enough—and indeed was enough a long time ago. It will take decades to rebuild from the wreckage in this country. But, as Christians, we can start now—just by not being afraid to say what is objectively the truth. Joe Biden has been elected president. Millions of babies are being aborted. The pandemic is real. So is racial injustice—both personal and systemic. So is the sexual abuse of women and children. If Christians are people of truth, we ought to be the first to acknowledge reality.

Here’s what God says: “When the leader is concerned with justice, the nation will be strong, but when he is only concerned with money, he will ruin his country.” Proverbs 29:4 (TEV)

Trump didn’t change America.
Trump revealed America.
To those who say: “This isn’t America”… I wish that were true. The truth is this IS America… Not all of America, but much more than we want to believe. We have work to do. pic.twitter.com/evPvNbCXpL

I’m believing that some folks who didn’t believe in white privilege saw how the white folks attacking the Capitol today were treated, then thought about any peaceful BLM march… and have since changed their minds.

Eugene Cho, author, pastor and president of Bread for the World

Such a dark day, my friends. I have deep concern and dismay about the future of my country. We stand at the crossroads…

America who are you? pic.twitter.com/vgsB011kit

Deeply disturbed by today’s chaos in DC. Joining with all who are praying for a return to tranquility and peace.

DC. This is shocking and yet I am not remotely shocked.

Lord… we lift our hands to you.

There’s no other help we know.

I will agree that this isn’t who we have to be. But it’s absolutely a continuation of who this country has been

My stomach hurts every time I see someone with a “Jesus” sign today.😓💔

Today’s political violence was a tragic illustration of what happens to a nation when it abandons God’s person, principles and policies. America is undergoing the passive wrath of God which takes place when His standards are compromised (Romans 1:18-32.) The result is chaos(cont)

In most churches they say racism is a sin, but they never address the guilty parties with church discipline.

I see folks taking the same approach with insurrectionists breaching the Capitol.

What is going on right now is the opposite of what we are called to do. People with Jesus signs etc. idk folks, we are living in very strange days. Jesus will judges the leaders of nations when he returns (Matt 25:31-46). We must be of sober mind now (Titus 2:11-13) 🙏🏿🙏🏿🙏🏿

RELEVANT will update this list as more statements come in.