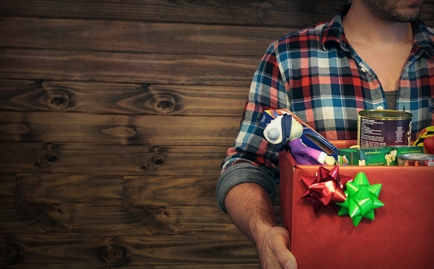 For several years, the highlight of the holiday season was the day my church put together food boxes for the less fortunate in our area. One of the benefits of being a megachurch is access to mega-resources, and my church spared no expense when it came to giving out holiday food. Hundreds of volunteers from the church would show up to assemble gigantic boxes filled with every imaginable food stuff: whole turkeys, roasting pans, gallons of milk, bags of fresh apples, onions, potatoes and carrots, and whole pumpkin pies from Costco. The boxes we put together rivaled much of my own family’s traditional feast, and it made me proud to know we were giving the best to those who needed it most.

For years, other like minded-volunteers and I would cram our cars with several food boxes and set off to deliver them to different parts of the city. The boxes would go to neighborhoods I rarely found myself in, given to families who either didn’t speak the same language as I or who were simply too exhausted to try. Most of the deliveries left me with a heartwarming moment—carrying in all the food, watching the eyes of the children grow wide as they stared at the huge assortment, merrily shouting, “God bless you!” as I left. Other experiences weren’t quite as positive, like the single mom who screamed into her cell phone the entire time I lugged in food (it took several trips), barely registering I was there at all. For the most part, however, delivering the feast was one of my favorite holiday traditions.

For the past several years, I have started to rethink all the warm fuzzies I got from these experiences. The church I now attend is in the heart of the city, with considerably fewer resources. The food boxes we put together last year were pretty pale in comparison and seemed almost laughable when delivered. What is a single Hispanic mom with no money to pay the electric bill going to do with several boxes of stuffing and cans of green beans? More importantly, I began to question the very nature of complete strangers delivering food to the poor one day out of the year.

What if I had a relationship with the single mom who seemed to be having a really rough day? What if I knew the story about the middle-aged shut-in who lived in the apartment complex specifically designated for drug addicts in recovery? What if I knew my neighbors well enough to be invited in for a cup of tea, instead of dropping off food like an underling for Santa Claus?

I realized that one of my main problems with Operation Food Box was the fact that many of the households we delivered to were addresses given to us by other aid organizations—very few of the families and individuals were known by members of the church. What does that say about a church if they have to outsource in order to find the poor and needy? For me, it meant there was a big enough disconnect between my desires (help the poor) and my reality (where are they?). I found that they were, indeed, all around us, and in order for myself to feel good about giving food, it needed to be more about mutuality than philanthropy.

I now live in low-income housing, which is filled mainly with refugee and immigrant families from various countries. For the past several years, my husband and I have cooked less-than-opulent Thanksgiving and Christmas feasts for several of our Somali family friends (they call it “The Day We Cook The Big Chickens”). Last year, my friend Betulah called to say she had some food for me. Curious, I went to her apartment where I discovered a food box from the megachurch  I formerly attended. Betulah had no use for any food that came in a box or a can, so I went home with all of the green beans and cranberry sauce I could handle. When we ate our feast several days later, I used those cans to help feed Betulah and her family. The irony of my former church indirectly giving me a food box was not lost on me. And it made our meal so much the richer.

While food boxes definitely have their place in the modern Christian tradition of giving, I can’t help but think an attitude of food sharing would be more beneficial. It would mean knowing our neighbors well enough that “the poor” is not a mere concept—and the “hungry and thirsty” aren’t an abstraction, they’re real people. Developing relationships and networking with organizations to empower families to never be hungry, regardless of the holiday season, is more in line with the teachings of Jesus than delivering one goody-filled box.

My old church has decided to go in a new direction this year, as they discovered that most of the families they delivered the food boxes to didn’t even have enough money to pay their utility bills, making most of the food useless. This year, the church is mobilizing members to donate to various food banks and shelters, and delivering a simple and more practical gift of socks and soup to all of those in need. Many people (myself included) were disappointed to miss out on the church camaraderie and joy of service that delivering the food boxes entailed. However, while it might not be as “fun,” I know partnering with long-term aid organizations and meeting practical needs is much more aligned with the goal of the Church as a whole. It is also a reminder that if we need someone else to tell us who the poor in our neighborhoods are, then we have missed out on following Jesus’ orders.

This year, I am signing up several families I know for the more modest food boxes furnished by my current church. But I don’t plan on dropping off the food and running back to my own apartment. I plan on cooking the turkey and green beans myself, and including sides of curry and goat stew. I am planning a new Christmas tradition of a feast that is all about the sharing—both of food and relationships.

Danielle lives in Portland, OR with her husband, kitty and brand new baby, Ramona. Even though she pretends to like it, she really hates the taste of goat.

On NBC’s “People of the Year”