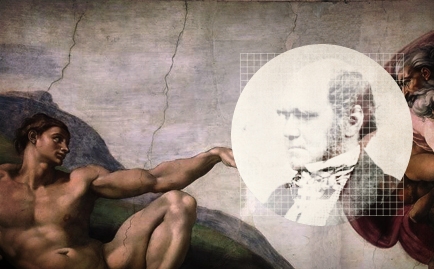 The only time I’ve ever defaced a piece of property was when I was about 10 years old and my mom brought home a used science book from a garage sale. She thought I might like all the pictures of lions and zebras and polar bears crawling across the pages, but instead I flipped right to the section on evolutionary biology and proceeded to go ape on page 25 with a green crayon.

Where it casually mentioned an Earth age of billions of years, I scribbled “NOT!” over the words. Where it depicted dinosaurs roaming the Earth before people, I drew stick figures on their backs. Where it praised the work of Charles Darwin, I wrote “BOOOOO!” and “LOSER” across the page. I felt empowered knowing that my crayon and I were doing the Lord’s work, one “edit” at a time.

My response reveals just how much suspicion and fear I’d learned to associate with Darwin’s theory of evolution, even at such an early age. Growing up, I learned that only atheists and agnostics believed such foolishness and that they’d constructed the whole theory with the sole purpose of undermining Scripture and destroying Christianity. We were locked in a battle with these “enemies of the faith,” I learned. Only one side could win, and if it wasn’t ours, the Christian faith would be lost.

This idea was perpetuated at my Christian college, where one of the science professors liked to tell the story of how, as a sophomore in high school, he had dreams of becoming a scientist but could not reconcile the theory of evolution with the creation account found in Genesis. So one night, he took a pair of scissors and a newly purchased Bible and began cutting out every verse he believed would have to be removed to believe in evolution. By the time he was finished, he said he couldn’t even lift the Bible without it falling apart. That was when he decided, “Either Scripture was true and evolution was wrong, or evolution was true and I must toss out the Bible.”

The message to me and my classmates was clear: We had to choose—Christianity or evolution, faith or science, Darwin or the Bible. We could not embrace both.

I went on accepting this dichotomy without question until my late 20s, when my desire to have a more examined faith led me to look into the scientific evidence for myself.

From the fossil record and DNA sequences, to ice rings and biodiversity, I found the evidence supporting evolutionary theory to be remarkably compelling and reasonable. This was not a far-fetched proposition concocted by God-haters to undermine the Bible. It was a cohesive, multifaceted scientific theory that consistently made testable predictions, many of which had led to breakthroughs in medicine and technology. I couldn’t just dismiss it as bogus; my intellectual integrity would not allow it.

Now, let me stop right here to clarify that the point of this article is not to advocate a certain view of origins. I have great respect and love for my brothers and sisters in Christ who interpret the data differently, or who feel compelled by their particular interpretation of Genesis 1 and 2 to hold a young earth perspective.

Rather than explaining why I believe in evolution, I want to explain why I’m still a Christian.

I have to admit that when I first encountered this evidence, I felt lost and frightened. All my life I’d been taught that Christianity and evolution were irreconcilable, and yet my newfound interest in science had not dampened my love for Jesus and my desire to follow Him. I didn’t want to have to choose between my faith and my intellectual integrity, though many of my friends and professors demanded that I do so.

By the grace of God, I bumped into an interesting quote from St. Augustine that changed everything. Centuries before anyone had heard of common descent, he warned of creating false fundamentals in regard to our interpretation of Genesis.

“In matters that are so obscure and far beyond our vision,” Augustine wrote, “we find in Holy Scripture passages which can be interpreted in very different ways without prejudice to the faith we have received. In such cases, we should not rush in headlong and so firmly take our stand on one side that, if further progress in the search for truth justly undermines this position, we too fall with it.”

My mistake all those years was not in holding to a young earth perspective, but in wrapping Christianity so tightly around it that changing my mind about evolution threatened to take down my entire faith.

As it turns out, God is not threatened by science or honest inquiry. If all truth is God’s truth, then we shouldn’t be afraid of what this world has to teach us. God is big enough and deep enough and eternal enough to handle our toughest questions and our most baffling discoveries.

With this in mind, I decided to study evolution without fear. I read books and journals and even attended a conference that was completely over my head. But rather than destroying my faith, this pursuit made it stronger. I learned to think critically, to entertain new ideas, to have patience with my questions and to embrace the diversity of opinion that exists within the Christian community. Best of all, I learned my faith was strong enough to survive examination, challenge and change. It was strong enough to survive my worst fears.

There is still much to learn about reconciling Christianity with science and vice versa. (Some books I recommend include The Language of God by Francis Collins, The Lost World of Genesis One by John Walton and Saving Darwin by Karl Giberson.) But I am confident we can study and learn—and even disagree—without losing faith if we just put down our crayons long enough to listen.

Rachel Held Evans lives in Dayton, Tenn., home of the famous Scopes Monkey Trial of 1925. Her memoir, Evolving in Monkey Town, released with Zondervan in July. She blogs at http://rachelheldevans.com.