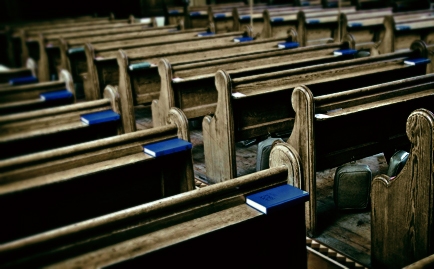 A couple times at a church here in Portland, the lead pastor has very kindly asked people to leave. I remember a specific time he just stood up and asked how many people had been coming to church for a year or more but hadn’t found a way to plug into the community. He then invited them to plug in (which at this church means to serve or find a home group or work in a ministry), and then told them if they hadn’t found a place that fit them, it might be time to try another church. It sounds rude, and the pastor wasn’t making anybody feel guilty—he just needed the chairs. He didn’t want to have to preach another service. The next week, there was a slight drop in attendance which freed up some chairs. I always admired that about this pastor.

To be clear, he hadn’t given up on them. And to be more clear, he hadn’t asked them to leave the Church (capital-C). What he was doing was leading; he was saying “this is where this community is going, where God has called us to go, and there may be other churches that God has called to just preach sermons and have people come and listen, perhaps doing ministry outside the community.” This pastor felt very strongly that the sermons, and even Sunday morning, weren’t what defined the church he had planted, but rather it was the act of “doing” work “together.”

Perhaps I admire this for the wrong reasons. Perhaps I get a bit tired of the unwritten rule of be as absolutely friendly to everybody as you can, nearly kissing up to them. I wonder if that doesn’t make a group of people spoiled. That idea is certainly debatable. My “black and white thinking” readers will see it as one way or another, but I think this is largely contextual. And it’s also a matter of calling for each church, perhaps.

There are other church leaders who, perhaps lacking in maturity, are just offensive. They talk like shock jocks, like slightly cleaned-up Howard Sterns, offending people and polarizing communities into people who are “with us” and “against us” (interestingly, this characteristic has been said to come from having been personally abused, needing to know who will submit to me and who won’t in order to feel safe) but this really isn’t what I’m talking about.

I think we are often afraid to say to somebody “You know, you don’t fit” because we might hurt them, so we get into relationships (and church is all about relationships) that simply aren’t right. We do this instead of helping people move on to a relationship that is right for them.

The truth is, there may be some people who simply aren’t a fit. It’s not that they are bad, it’s just that they aren’t really contributing anything, either because they haven’t been provided with a way for them to contribute (poor leadership) or because the system is allowing them to hang on as a pariah. Either way, something has to change, or else your church will become a place people come in order to be entertained.

Another pastor friend of mine planted a church several years ago. It was an offshoot of another church that was rightly falling apart due to divisions and lack of leadership. About 150 people came to that first meeting, and my friend stood up and asked everybody to really think about why they were there. He said that if anybody had come there with torches, with an axe to grind against the old church, to please leave. He didn’t want to build a reactionary church filled with people who were against something. He wanted to build a church filled with people who are for something, instead. The next week, only 50 people showed up. Years later, though, his church is healthy and vibrant and, well, quite large.

So what do you think? Are churches supposed to be warm and inviting to everybody, no matter what, or is it OK to identify people who just need to move on and find something else that fits them better? What’s your feeling about this? Aren’t there people in your church who, quite honestly, just need to move on?

Monsanto Donates $4 Million Worth of Seeds to Haiti