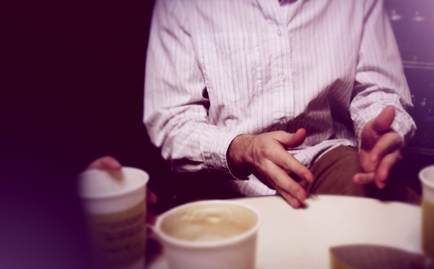 OK, so my name is Matthew and I’m a doubter. (Shall we drink to that?)

The truth is, sometimes I think this whole "Christianity" thing feels like a bad fairytale, like She-Ra without the sex appeal and a Pegasus. And other times, my struggling belief that Jesus lives pulls me out of my own muck (and other people’s muck).

For the longest time, existing amid that tension drove me nuts. Whenever I was in a room surrounded by people—you know, friends, family, strangers, etc.—who all confess to completely understanding the "Good News" (and I feel like I’m always in a room like that), doubt made me feel what I imagine Sarah Palin would feel in a room full of political science professors: like an hors d’oeuvre.

And for a long time, I walked into those kinds of situations anticipating and even fearing being eaten by the hungry mob of "certain" believers. Last year, one of the pastors at my church asked Jessica and me to join the small group they were starting at their house. My first response was a silent cringe, mostly because I’d grown to hate being in small circles of people whose "faith in God" was so thick you could cut it with a knife. But we joined, and upon saying, "sure, why not?" I started sharpening my machete.

The first book we planned to study was Francis Chan’s Forgotten God, a relatively short title about the Holy Spirit, the one-third of the Trinity that Chan believes the Church has forgotten. On the first week, the group’s leader asked us to share our initial feelings/thoughts about the Holy Spirit. After one of the other members shared her faith-filled passion about God’s spirit, I decided to offer my opinion.

"To be honest, I’m fearful of this study," I said, "because all my life, I’ve heard a lot of things said about the Holy Spirit. Crazy things. Hurtful things. Far-fetched things. And I have a hard time believing that the Spirit of God has anything to do with a large portion of what it receives credit for doing. I have a lot of doubt in regards to the ‘working of the Holy Spirit.’"

After a brief awkward silence, the people in my small group affirmed my thoughts with nods and comments. Nobody made me feel like an outsider or a "special cause" they needed to put on their prayer list. And that was uneasy at first. I expected them to challenge my Christianity. A part of me wanted them to. But they didn’t. Not once. Each of them accepted me as an equal, as somebody whose story offered value and insight to the topic of discussion.

Over the course of the next few weeks as we talked about God’s Spirit, I became more and more comfortable letting people "see" my doubt, questions and spiritual baggage.

The hardest part for me was keeping quiet when somebody else in the small group engaged the discussion with certainty. I think that’s difficult for many of us who doubt. We become so used to our questions and ideas being ill-received that we often enter discussions about God expecting/assuming that we’ll be challenged or segregated or labeled.

On numerous occasions, I’ve allowed my doubt and skepticism about the things of God to morph into closed-minded cynicism, somebody only interested in poking holes in other people’s beliefs. On several occasions, some of the things that members of my small group said about the Holy Spirit caused me to write punch lines in my head. On a couple of occasions, those punch lines were said aloud. And people laughed.

Other times, I was tempted to speak up in the middle of somebody sharing their own story because I believed I had a story that would challenge that person’s belief or disprove it or offer a reason as to why they should doubt too. And on one occasion, I’m ashamed to admit I did that; I pounced on somebody else’s belief like a bobcat on a rabbit.

I’ve had to learn how to engage faith as doubter. It’s not easy. I’m not used to being accepted. I’m used to feeling like a vampire, lonely and somewhat evil.

But I’m learning to remember that, just like a person’s strong belief can cause their faith to be rigid and judgmental and come holding a sword, my doubt can sometimes cause my faith to be cocky and unmerciful and bearing a machete.

And a scenario like that helps no one; of that I am certain.

Matthew Paul Turner is a blogger and author of Hear No Evil (Waterbrook Press). This article was originally published on Jason Boyett’s blog. Jason is the author of O Me of Little Faith (Zondervan).