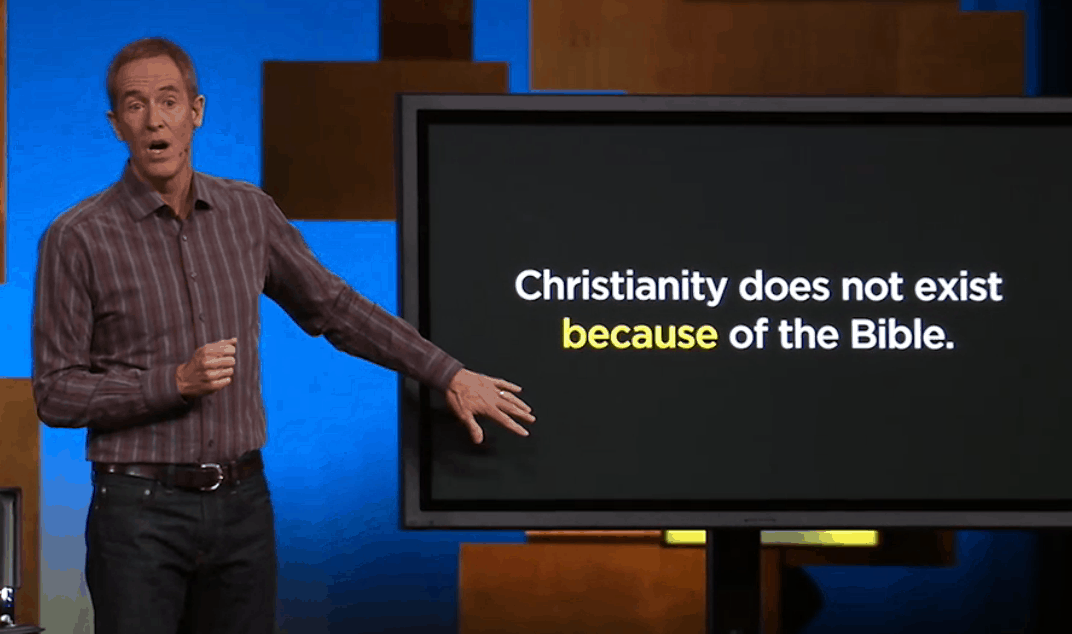 Megachurch pastor Andy Stanley has found himself in the middle of a theological controversy.

The drama started back on Aug. 7, when Stanley preached a sermon called “The Bible Told Me So” as part of a sermon series called “Who Needs God.” The name of the sermon—which was about the role the Bible should play in the life Christians—comes from the old children’s song, “Jesus Loves Me.” Stanley explained,

Essentially, Stanley’s sermon makes the case that too many Christians put the Bible on the same level as God. He also discouraged a “version of a Christianity” that is “a house of cards” that falls apart if we find out that certain possible historic or scientific details of the Bible are inaccurate or that there are apparent contradictions. (You can see the entire thing here.) He went on to say that “Christianity does not exist because of the Bible.”

The sermon sparked a controversy among some theologians and bloggers, who suggested that Stanley—who is one of the most influential pastors in the country—was questioning the inerrancy of scripture.

This weekend, Stanley posted a response to criticism and clarified his sermon. Not only did he explain why he preached the sermon (to set the context for why many millennials are leaving the church), but also confirmed that he still believes inerrancy.

In a piece of Outreach Magazine, he explained, “The confusion related to my most recent series stems more from methodology than theology.” He said that he doesn’t preach from notes and that his delivery can be confusing: “[A] technique that is sometimes confusing for the occasional viewer is my habit of saying what I suspect skeptics are thinking about something I’m saying. In my effort to state their assumptions, I sometimes sound as if I share their assumptions.”

During “The Bible Told Me So,” I wanted educated, dechurched millennials to know that I knew that those who supposedly know everything are convinced there was no worldwide flood or Hebrew migration from Egypt. While addressing them directly, I gave them the benefit of the doubt to make the following point: Even if those events never occurred, it does nothing to undermine the evidence supporting the resurrection of Jesus and thus the claims he made about himself. And yes, as noted above, I know Jesus made claims about the Jewish Scriptures. But this was one sermon in a series of six … I hadn’t gotten to that yet.

Stanley went on to repeatedly say that he believes “the Bible is without error in everything it affirms” and that he “believe[s] what the Bible says is true, is true,” and pointed to the work that his father, Dr. Charles Stanley, to preserve the belief in the infallibility of the Bible among modern Christians.

You can see his entire response here.

No, Relationships Shouldn’t Be Simple Or Easy