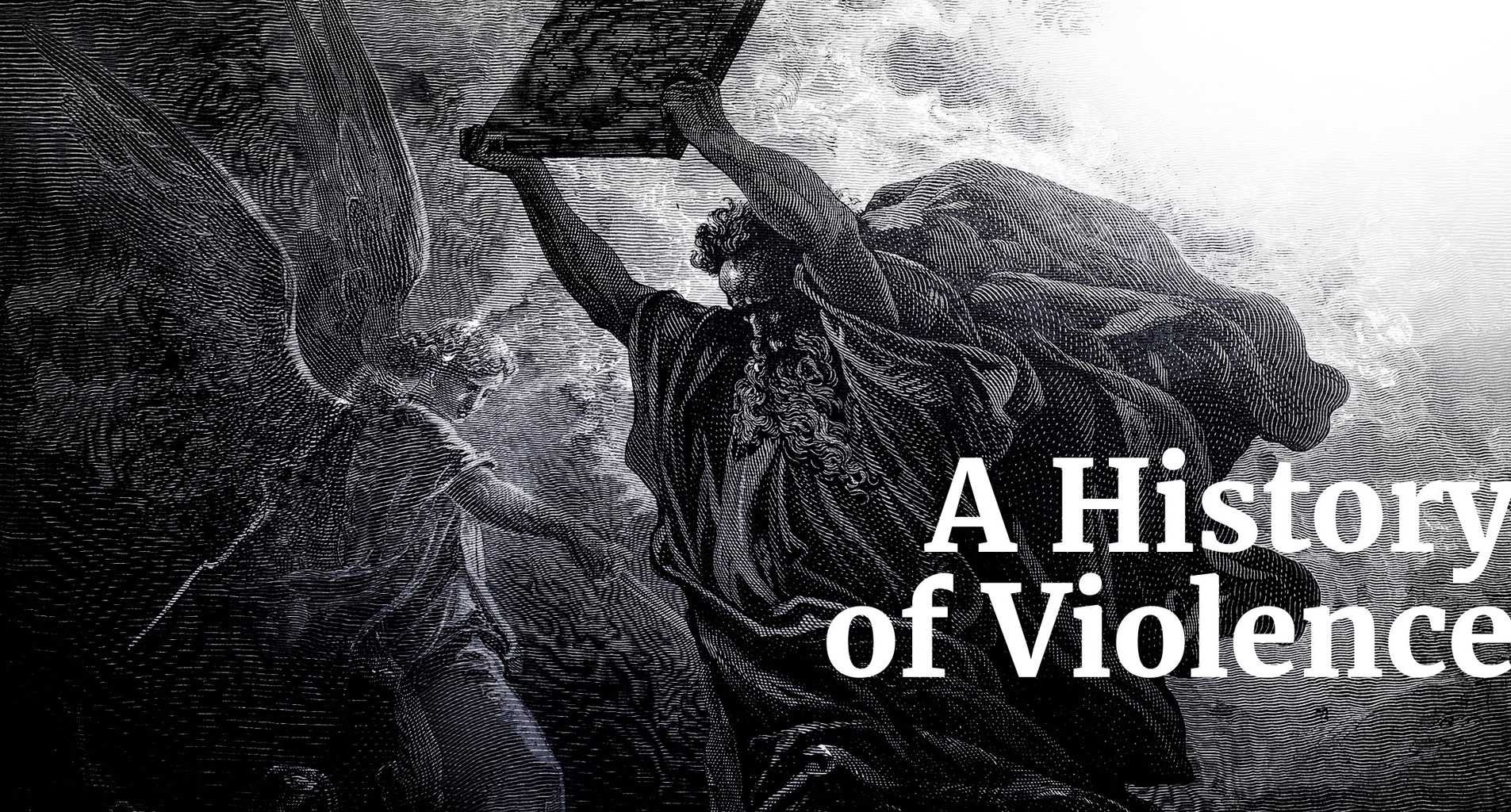 According to an ancient tale, there once was a prophet who lived in a city under siege by enemy armies. This prophet was given a vision that the siege would vanish in the night and food would become plentiful once more, but a soldier who overheard the prophecy expressed some skepticism. The prophet was angry at this, and responded by saying the soldier wouldn’t live to see the prophecy come true.

Sure enough, the next morning, the siege army mysteriously vanished and in the citizens’ joyful rush to plunder all the food their enemies had been hoarding, the doubtful soldier was crushed to death, just as the prophet had divinely predicted.

This sounds like the work of a vengeful and angry deity, a dark and ancient god who responds to even the pettiest of doubts with extreme prejudice. And yet, the god in this story is the same God Christians pray to today. You can read that whole story in 2 Kings 7.

Dawkins’ assessment is savage, but is it dishonest? The Old Testament is a bloody book, mixing commands of mercy and praise for God’s love with gory tales of murder, rape and injustice, often committed at divine command. We read of God’s people slaughtering entire cities in the name of the Lord. We see characters like David, the “man after God’s own heart,” praised for merciless military campaigns. “Happy is the one who seizes your infants and dashes them against the rocks,” the psalmist declares to his enemies.

And then we see Jesus, God in the flesh, who tells us to love our enemies. To pray for those who hurt us. To lovingly serve those who want to take advantage of us. To refrain from violence and instead overcome evil with good. Jesus says this is what makes us “children of God.” Did the Old Testament miss that memo?

In The Crucifixion of the Warrior God, a new two-volume work, pastor and theologian Greg Boyd introduces a fresh solution to this conundrum. A short, accessible version of his magnum opus, called Cross Vision, came out in August, and Boyd sat down with RELEVANT to discuss his proposal.

RELEVANT: Your central question is about the contrast between Jesus and the violence of the Old Testament. How did that become so pressing for you?

BOYD: Well, the clearer I got on how central nonviolence is to the revelation of God in Jesus and to His Kingdom ethic, the foggier I got about what to do with Scripture’s violent portraits of God. Ten years ago, I planned on taking the summer to write a short little book that would justify God’s violence. Fifty pages in, I quit. My explanations felt completely inadequate.

So I had to scrap that first project and instead embark on a 10-year researching and writing project that resulted in The Crucifixion of the Warrior God.

RELEVANT: Of course, you’re not the first to notice this contrast. It’s a favorite subject for critics of Christianity, and other Christians have also addressed the problem in the past. Why weren’t you satisfied with those approaches?

BOYD: It’s been argued that the Old Testament—its violent portraits of God, as well as the stuff on women, slaves and its barbaric laws—has created more unbelievers than any other single force. I think that’s probably true. I’ve known many former Christians who lost their faith once they faced up to this stuff. This is one of the reasons I’m passionate about this topic.

RELEVANT: Your book lists all the passages depicting divine violence in the Bible. It’s quite a wallop.

BOYD: It’s absolutely horrific. And as I found out 10 years ago, it can’t be justified.

So, one historical response originated with a guy named Marcion, who basically just rejected the Old Testament. No Christian today rejects the Old Testament, but lots of people are rejecting its violent parts.

That doesn’t work for me, primarily because Jesus endorsed the whole Hebrew Bible as God-inspired. Plus, if you take away the violent episodes, you’ve pretty much gutted the storyline of the Bible. Unfortunately, the major turning points are violent—the Flood, the Passover, various judgments of Israel—so you’re left without a coherent narrative. This is what I’ve called the “dismissal solution.”

There’s also the “synthesis solution,” which is the most common approach since the fifth century. It says if you believe the whole Bible is inspired, these violent portraits of God must be taken at face value and synthesized with what Jesus reveals about God. This view typically says Jesus is the fullest revelation of God, but there’s also this other side of God that makes God capable of genocide.

This view became implausible to me when I discovered the New Testament doesn’t present Jesus, especially Jesus Christ crucified, as one revelation among others.

Jesus is the revelation that culminates and surpasses all others. Hebrews 1:1-3 says in the past people got glimpses of truth and glimpses of God’s glory and character, but now we have the Son, who is really God in person. He is the very radiance of God’s glory and the exact representation of what God’s like.

RELEVANT: So the model you’ve proposed asks us to use the cross as the lens with which we interpret these difficult passages that, at face value, seem to be very unlike Jesus.

BOYD: My conviction is we need to read everything in Scripture in light of God on the cross—not alongside the cross or in competition with the cross. I’m suggesting a type of “reinterpretation solution,” which was prevalent in the Early Church. They didn’t feel free to dismiss any passage of Scripture, but they also couldn’t accept the surface meaning of these violent portraits that conflict with what we learn about God in Jesus.

This solution unfortunately ended abruptly in the fourth century, mainly because the Church, through Emperor Constantine, gained political power and therefore had to rationalize violence. Now the violent portraits of God that were problems for earlier theologians became advantageous  for leaders who needed to justify their violence. And that is the tragic role they’ve played through much of history.

All I’m saying is, let’s get back to the approach of the Early Church. My claim is when we look at these violent portraits of God through the lens of the cross—really trusting that God is the way He’s revealed on the cross—we can see things going on that the original audience couldn’t. We can see these passages bear witness to the nonviolent God revealed in Jesus on the cross.

RELEVANT: So how does this lens change the violent passages?

Don’t Forget, There’s a Lot Right With the Church, Too

BOYD: Well, it seems like an impossible question: How does a genocidal portrait of God—saying “kill every man, woman, child, infant and animal in this region,”—how does a portrait like that point to the non-violent, self-sacrificial love of God revealed on the cross? I began to understand this when I asked an even more fundamental question: How does the cross reveal God?

If you look at the cross from a natural point of view, all you see is a guilty-appearing, godforsaken criminal. So, what is it about this particular crucified criminal that we say is the full revelation of God? It’s not what we and everyone else see on the surface that reveals God’s character to us. It’s rather what we see when we, by faith, look through the surface of the cross and behold something else in the depth of the cross. By faith we see the God of this universe, out of His unfathomable love for us, stooping an infinite distance to become human and become this godforsaken, guilty-appearing criminal.

It’s also why the cross is simultaneously ugly and beautiful for the believer. On the surface, it’s supremely ugly because it reflects the ugliness of the sin of the world Christ bears. But it’s also supremely beautiful, because we see God stooping out of love to bear that ugliness for us.

Now, if everything in Scripture is supposed to point to the cross, doesn’t it make sense to read the Bible wondering where else God might have revealed himself the way He did on Calvary? Where else did God reveal His beauty by stooping to bear the ugly sin of His people, taking on an ugly appearance that mirrors that sin? Where else might we find depictions of God that are ugly on their sin-mirroring surface, requiring us to exercise faith to look through their ugly surface to discern the beauty of the stooping, sin-bearing God?

This is the cornerstone for how I propose we interpret violent portraits of God. Their ugly surface meaning tells us a lot about how far God had to stoop to remain in covenantal solidarity with His fallen people. And with our cross-informed faith, we can look through this sin-mirroring ugly surface, just as we do on Calvary, and behold God doing exactly what He does on Calvary. He’s stooping to bear the sin of His fallen people.

RELEVANT: You mentioned the Old Testament’s violent depictions of God have historically been used to justify violence rather than for edification. So, say I’m 100 percent on board with your reinterpretation solution, and now it’s time for some devotional Bible reading. Does your proposal make these depictions useful for personal discipleship?

BOYD: Yes, I think this is a way we can be edified by the whole Bible. See, we often ignore these horrific, macabre portraits of God or try to gloss

over them. We don’t officially reject the Old Testament, like Marcion, but for all intents and purposes we’re “functional Marcionites.” And it’s not hard to see why.

Think about a passage like Numbers 31, where Moses says, “Go slaughter the Midianites.” When the Israelite soldiers spare the women, children and some animals, Moses is enraged and—ostensibly under the command of God—he says, “Slaughter all the boys and women who have had sex, but keep alive all the virgins for yourself,” basically to use as sex slaves.

You wonder: How on earth could this possibly be the inspired Word of God, let alone inspired in a way that points to the cross? It is truly grotesque, but this is precisely how it points to the cross and becomes edifying. The very ugliness of passages like this testify to just how low God was willing to stoop to remain in covenantal solidarity with His people. They are testaments to the truth that Jesus Christ has always been willing to do what He does in a supreme way on Calvary: Reveal God’s character by bearing the sin of His people, thereby taking on appearances that reflect that sin. It must have grieved His heart, but He was willing to do that out of self-sacrificial love.

That’s how these passages become very edifying to me. At the end of the day, what I’m proposing is extremely practical. Now, I can see what Martin Luther claimed to see when he says, “Throughout Scripture, I see nothing else but Jesus Christ crucified.”

is a writer in St. Paul, MN. She is the weekend editor at The Week, a columnist at Rare and a fellow at Defense Priorities.

‘To the Bone’ and the Reality of Eating Disorders