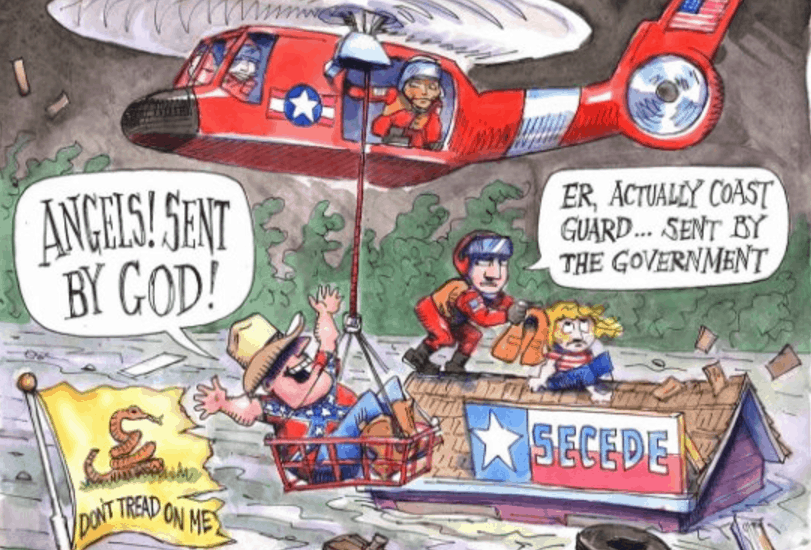 Look, nobody’s going to political cartoons for intelligent, nuanced analysis of complex political issues. It’s just a political cartoon, mostly intended to scratch whatever preconceived biases you bring to the equation. They’re usually not exactly brilliant, but they’re not exactly bad. Well, usually not. But this on Wednesday, Pulitzer Prize-winner Matt Wuerker had a (since-deleted) cartoon tweeted by Politico and it’s a mess.

If you want to know what .@politico thinks about the victims of #Harvey, here is the cartoon they just tweeted, then deleted. pic.twitter.com/9cr0Ne2Z06

As you can see, in Wuerker’s mind, Harvey’s victims are a bunch of cowboy-hat toting rednecks who can’t tell the difference between the Coast Guard and angels. Outrage came fast and furiously, from all sides of the partisan aisle.

And ignorant. Is the cartoonist not reading about/seeing the extraordinary efforts of individual Texans saving neighbors and strangers? https://t.co/xXMlD0XHIg

This is beneath the publication. https://t.co/r68WLymai0

There are a few problems with the cartoon. The first and most obvious is how it reduces a complex conversation about government size to a snarky talking point. That’s an unfortunate belittling of an important issue, but it’s certainly not exclusive to this cartoon. All political cartoons (and a good deal of political commentary) are guilty of titling at strawmen.

More concerning is the callousness. Many people are still trapped by Harvey’s floodwaters, running low on supplies. Depicting these people as two-dimensional idiots is an insult to them.

Likewise, the belittling crack about the faith these people might be clinging to is deeply uncalled for. Sure, a lot of conservatives believe the government is too big and that there should be some cuts. Some of conservative lawmakers in Texas are on the record for voting against increasing financial aid for Hurricane Sandy while today they ask for more aid for relief in their own state.

There does seem to be hypocrisy there, but equivocating the political brinksmanship of a few with the real needs, beliefs and philosophies of a huge swash of America is just intentional obtuseness. And using a natural disaster that is costing lives as a chance to score a cheap, not particularly profound political point is just bad form across the board.