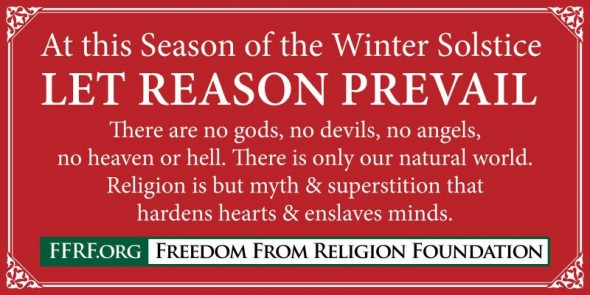 What ‘La La Land’ Tells Us About Hollywood Romance

The Freedom From Religion Foundation—an “umbrella” for those “who are free from religion and are committed to the cherished principle of separation of state and church”—has officially received authorization to display its anti-Christian and anti-religion propaganda in public spaces.

Members of the group see their right to display as no different from Christian groups being able to display nativity sets in public. And the group is taking pains to make its point. In Boca Raton, Florida, this is what the Christmas/winter displays look like in one public park looks like (thanks also to a Satanist group who has a display in the park that was erected after a nativity scene went in):

Boca isn’t the only place.

The world’s largest atheist group is also putting up banners in Connecticut that read:

At this season of the Winter Solstice, may reason prevail. / There are no gods, no devils, no angels, no heaven or hell. / There is only our natural world. / Religion is but myth and superstition that hardens hearts and enslaves minds.

Last year FFRF filed a lawsuit after being denied the rights to display one of their banners at a park in Shelton, Connecticut. The FFRF Co-President, Dan Barker claims the group was simply trying to obtain equal representation throughout the holiday season—something of a counterbalance to the pervasiveness of nativity scenes.

In a statement, FFRF co-president said: “We’d prefer to keep public parks and government buildings free from religious divisiveness. But if a devotional nativity display is allowed, there must be ‘room at the inn’ for all points of view, including irreverence and freethought.”

The FFRF isn’t the only group trying to un-Christ Christmas. This year members of the American Atheists group have also taken on advertising an alternative holiday with their “Skip Church” billboards.

No, the Crackdown on Fake News Isn’t Censorship