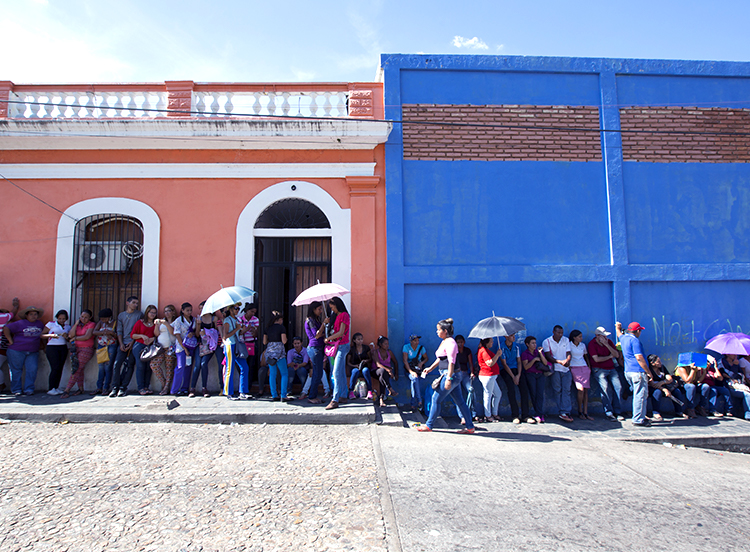 This weekend, thousands of people in Venezuela took to the streets to protest the government of President Nicolas Maduro and his violent crackdown on any opposition.

Days before, more than a dozen people were killed as protests and demonstrations turned violent, and many worry that the country is on the brink of collapse. Not only have at least 22 died this month alone in clashes between anti-Maduro demonstrators and government forces, police and supporters, but basic necessities like food and medical supplies are critically low across the country.

Here’s a look at what you need to know about the humanitarian crisis in Venezuela.

Who Is President Nicolas Maduro, and What’s Up With That Baseball Tweet?

Maduro is the successor of former Venezuela president Hugo Chavez, the controversial leader who died in 2013 after ruling Venezuela for 14 years.

His reactions to anti-government protests have been widely criticized. As The New York Times has reported, groups of violent, armed gangs (“colectivos”) have been targeting demonstrators in recent weeks. According to the Times, they are trained and armed by the government:

Mr. Maduro has responded by sending National Guardsmen armed with water cannons and rubber bullets to disperse the crowds. But alongside the security forces, experts and witnesses say, are the enforcers from the colectivos, who engage in fiercer and often deadly intimidation.

Over the weekend, Maduro took to Twitter in a chilling video in which he smiles and plays catch with a fellow government official. He tells opponents that “justice will come,” adding, “We are here warming up, warming up for good games and good surprises that are coming. Later, don’t say I didn’t tell you. We are getting ready.”

Why Are People Protesting?

Ultimately, they are seeking major reforms and are demanding that Maduro step down.

Maduro has attempted to hold power by delaying votes and, as critics say, essentially eliminating democracy. In a brazen (and botched move) last month, the country’s supreme court completely dissolved the parliament, further eliminating accountability and power from any government leaders who oppose Maduro.

The backlash was so severe that it was reversed several days later, but not after sparking more deadly protest.

However, to some extent, protests have been going on for years as the tightly government-controlled economy has been on the brink of collapse.

The socialist economy was largely based on oil exports, but as the price of oil has fallen somewhat drastically in recent years, the economy has been bleeding cash. Right now, their cash reserves are critically low.

Citizens across the country don’t have access to very basic goods, including food.

What Happens Next and How Can We Help

The next few days could be critical in Venezuela as Maduro has now said he may be willing to talk with opposition leaders and even hinted at the possibility of local elections. But with violence escalating and demonstrators calling for his resignation, that may be too little too late.

"It's too late" for Maduro to convene regional elections in Venezuela, @Almagro_OEA2015 told me. https://t.co/vUi7WCuWxF @Miamiherald pic.twitter.com/C7yUekdF6W

Making the situation even worse for the people of Venezuela is that despite chronic food shortages, the government refuses to accept aid from international bodies.

However, there are some aid groups and nonprofits in the country that are accepting donations as the country remains in turmoil.