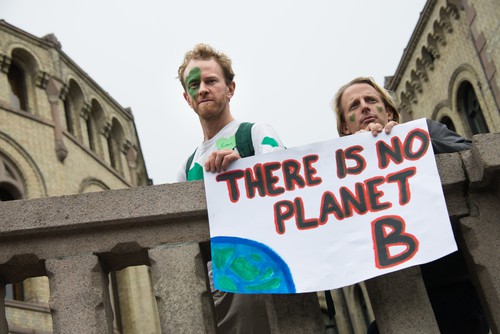 But among voters, climate change remains sort of a Rorschach Test for your political and social views. Statistically, Democrats are more likely to believe in climate change than Republicans. In the last two years, the percentage of Republicans who say they believe climate change is caused by human activity and that’s already begun has actually dropped from 40 percent to about a third.

In the meantime, the number of Democrats who say the same thing has slightly increased, from 87 percent to 89 percent, according to Axios.

But here’s where Protestant Christians are actually an outlier, according to an ABC News poll. While just 25 percent of Republicans consider climate change to be a very serious problem, 32 percent of white evangelicals believe the same. That’s not a lot, but it’s surprisingly more than the political base they generally call home.

And 32 percent is actually a huge jump. Just 17 percent of white evangelicals saw climate change as a big problem back in 2013, and just 24 percent in 2015. The number is still small, but it’s growing rapidly.

But the United States is actually pulling back its involvement in fixing climate change, starting with President Donald Trump’s announcement that the U.S. is withdrawing from the historic Paris Agreement that aimed to reduce the global emission of greenhouse gases by two degrees Celsius. A recent UN report suggested the world will not only fall short of its goal, but will actually rise 3.2 degrees Celsius by 2100.

Not nearly enough is being done to fight climate change, but if the percentage of Christians who believe it’s on the rise continues to increase, they could position themselves as a serious part of the solution.

Just so long as it’s not too late.

Don’t Bring Your Toxic Relationships Into 2019