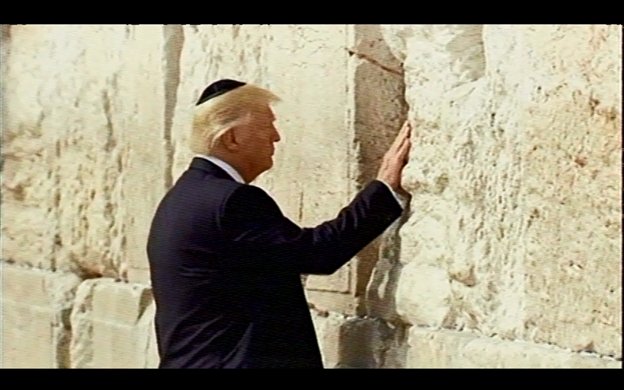 The Western Wall is one of Judaism’s holiest sites and President Donald Trump made a historic visit to it earlier today, flanked by his senior advisor and son-in-law Jared Kushner along with Western Wall Rabbi Shmuel Rabinovich.

Wearing a yarmulke, Trump placed a folded-up note in the wall.

Pres Trump spends a moment of silent reflection with his hand on the Western Wall. pic.twitter.com/l9aONNrdkZ

In 2008, then-Senator Barack Obama visited the Western Wall (he also placed a note in it, which was stolen and published by an Israeli paper.) George W. Bush, George H.W. Bush and Bill Clinton all also visited the Western Wall, but they did so either as candidates or private citizens. Trump is the first sitting U.S. president to visit.

He did so without the presence of Prime Minister Benjamin Netanyahu, which is a bit notable. The Western Wall is considered sacred, as it was part of the second Jewish Temple, the building, which is recorded in Ezra and Nehemiah. That temple was mostly destroyed by the Romans in A.D. 70.

The Western Wall’s proximity to the Dome of the Rock means the site also has significance for Muslims. Because of its location in the Western Bank, the site isn’t technically recognized as Israeli territory, although the Trump administration has not been clear about its official position.

If You Think About It, This Spectacular BMX Fail Is a Metaphor For Life