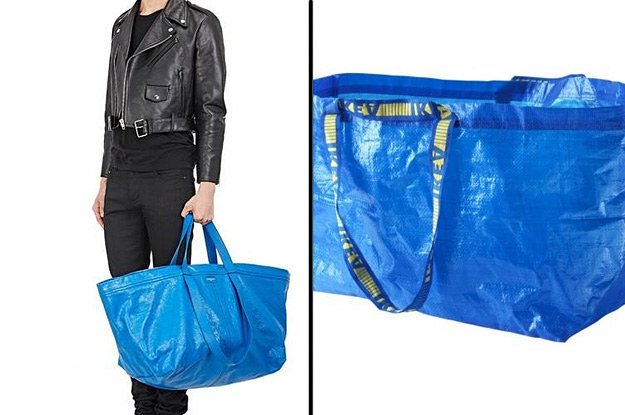 All things created will eventually be rebooted. An animated Lion King gives way to a live-action Lion King. A regular Facebook gives way to a mind-reading Facebook. And those crinkled up blue Ikea bags must give way to a designer version that will set you back two thousand one hundred and forty-five dollars.

Who wore it better? Balenciaga or IKEA? pic.twitter.com/LCB9Qri2xN

Balenciaga is the designer in question, and their “Arena Extra-Large Shopper Tote Bag” is a “homage” to those 99-cent Ikea bags, but it clocks in just over two thousand times the cost of the original. Why? To what end? What person would spend $2,000 when they could spend $1? Not every question has an answer, much like not every person has $2,000 to spend on an Ikea bag knockoff. Speaking of, let’s return to that price point: 2,145 American dollars for this thing.

Balenciaga makes $2000 bag that's an "homage" to the IKEA shopping bag and I'm like fashion you're crazy but I can't quit you. pic.twitter.com/wLIhmjmfy2

Now you could just stick with the Ikea bag — you may have a couple lying around your apartment right now, as a matter of fact, stuffed into the corner next to your pile of laundry or still filled with a broken French Press and a lidless Tupperware container from your last move. But really, is that what you want? To have a 99-cent Ikea bag when you could have this Ikea-ish bag? Don’t answer that, especially if the answer “Yes, that’s what I want,” because come on.

The Current Popularity of the ‘Religious Left’ May Not Last Long