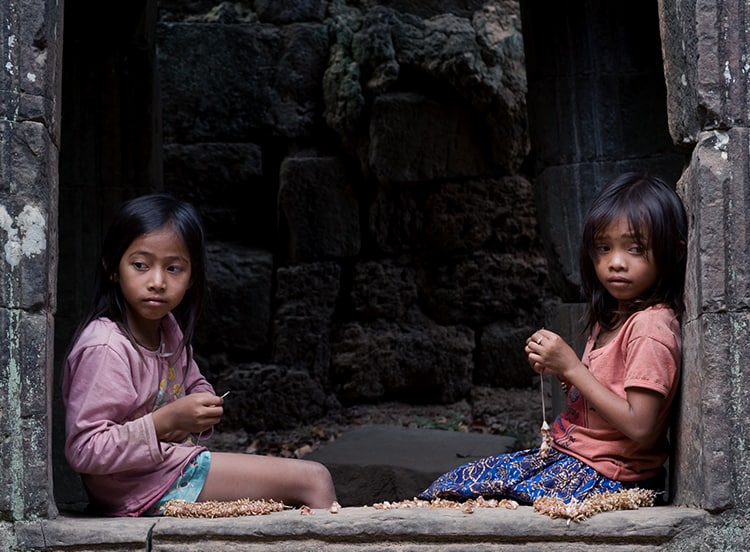 When I began my advocacy work with For Dignity, I could not fully comprehend the magnitude of human trafficking and the depth of evil that encapsulated it. As I devoured countless articles and information on the internet, one particular video stopped me in my tracks. A man named Aaron Cohen had gone undercover into Cambodia brothels to expose the dark secret of child sex trafficking. He boldly asked someone on the street where he could purchase a child, and without blinking an eye, that guy led him straight into a brothel.

Child after child walked into the room for his choosing—each girl was younger than the last. One little girl did not look older than 5 or 6, with her head hung down, and she repeated the words yum-yum like a mantra. In the vernacular of Cambodia, yum-yum means oral sex.

How could the rest of the world sit silent? How could Cambodia’s government turn a blind eye? Indeed I looked into the face of evil when I witnessed grown men selling vulnerable children to pedophiles and rapists. Greed had revealed its ugly head in the foulest form.

Cambodia is one of the worst places in the world for child sex trafficking. For a mere couple of dollars, less money than coffee, tourists can access a dark world. In plain sight, in buildings on the main street, girls are scantily dressed and paraded behind a glass wall, nicknamed the fishbowl. They have numbers strung around their necks and are reduced to a mere commodity to satisfy the insatiable lusts of both foreign and national men. They are caged prey without any options.

When a stranger flippantly chooses a girl’s number, she must follow him into a dark room where he further strips her dignity and forces her into unmentionable acts.

The greater tragedy of Cambodia’s sex trade is that mothers are willingly selling their daughters to brothels to feed the rest of their family. It’s an agonizing sacrifice for the mother, for she loves her daughter, but is bound to her poverty, and cannot see any other viable option. One mother sold her daughter for $300 to a brothel, and in return, the daughter was indebted to the brothel for a year to pay off that “investment.”

Brokers intentionally exploit the poverty level of these families. These pimps visit the villages and negotiate a deal for the daughter’s virginity, which is easy since the family is living on less than a $1 a day. The girls are then taken to brothels where they are drugged, threatened and raped. Many will contract STDs because the majority of customers do not wear condoms. If the daughter does make it back to the village, she is shamed, unwanted and labeled a prostitute.

The dark epidemic of sex trafficking in Cambodia is unhinged, and the world needs to wake up. Cambodia is known as a top destination for child rape. While the children are clearly frightened and confused, their innocence is bargained away by pedophiles and rapists who take pleasure in their pain. There are an estimated 30-40,000 sex workers across Cambodia with nearly half under the age of 15. Police are paid off, and the government is known to turn a blind eye since sex tourism is fueling the economy. Cambodia is a sexual playground for those indifferent to the destruction caused by their lust.

What can we do to stop this insanity? Who will sound the clarion call and draw a line of demarcation demanding social justice? If we can send people to the moon, then we can implement solutions to this horrific crime against humanity.

Perhaps the answers lie in changing the economic structure of a country that is bound by poverty and offer mothers viable options in place of selling their children? Perhaps more thorough and stringent penalties against sex tourists? Surely there must be ways to confront and combat this evil. Even if we don’t know all the answers, it is unconscionable not to try. We must hear the cries of a nation and respond.

How you can help:

Consider donating to an organization that not only helps with prevention, but also prioritizes reintegration of young girls who have been trafficked.

This 2014 article by The Huffington Post is a good place to start your search. Some of the organizations highlighted also need volunteers to further their work.

Kelly Master is a sought out speaker, author and advocate who teaches with great passion and conviction. She shares the unchanging gospel of Christ in a fresh, relevant and practical way. She is the Founder and Director of For Dignity, a non-profit organization that is empowering victims and survivors of sexual exploitation with hope and dignity. Her first book SHINE-Uplifting Words for Girls in Stilettos is encouraging women across the country.

Yikes. This ‘Transformers: The Last Knight’ Poster Is a Mess

What Actually Happens When Someone Dies?