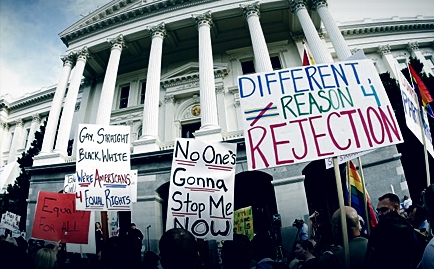 When Proposition 8 was ruled “unconstitutional” by a California judge, Christian leaders let out a collective cry. Tony Perkins of the Family Research Council vowed to keep fighting, and the American Family Association called it an “absolutely outrageous and unconscionable ruling.” Same-sex marriage has long been a centerpiece issue in the culture wars, and one might say that the Prop 8 debate serves as another call to arms for many conservative Christians.

One demographic strangely absent from this debate is younger Christians. Though we don’t normally shy away from advocacy—see Darfur, clean water projects, orphan care, poverty and missions—our generation seems unwilling to fight this battle. According to a 2009 poll by the Pew Forum, 65 percent of religious Americans aged 65+ oppose gay marriage while only 45 percent of those ages 18-29 do. A 2008 poll reported that 52 percent of young evangelicals now say they support either gay marriage or civil unions.

But why is this issue shifting among young people? What is causing this generation to see things differently than the last?

Gay Friends. One of the chief reasons young Christians aren’t fighting against gay marriage is they have so many more gay and lesbian friends. According to a 2008 Public Religion Research poll, 37 percent of evangelicals ages 18-34 said they have a close friend or relative who is gay. Only 16 percent of evangelicals 35+ said the same. Many of us are now standing next to our gay friends asking, “Aren’t they still the neighbors that Jesus asked us to love?” It is easy to oppose a nebulous “agenda,” but young people are finding it increasingly difficult to take up arms against their loved ones.

Tired Rhetoric. Many young people (and older, for that matter) are simply weary of the insensitive, hateful speech. The present debate is often marked by speaking without listening and devoid of any respect, mutual or otherwise. Boiling down the biblical position to bumper sticker clichés and screaming past our gay and lesbian neighbors doesn’t strike our generation as particularly loving, not to mention Christlike. As a result, some of the younger faithful have left the conversation altogether.

Neglected Hypocrisy. A common point made by the gay marriage supporters I’ve spoken with is that heterosexuals are doing as much to denigrate marriage as homosexuals. To their point, the incomprehensible divorce rate—even within the most conservative Christian denominations—is damning. If we truly believe that marriage as defined by traditionalists (one man and one woman for life) is under assault, why isn’t there a Christian uprising to reform divorce laws? Could it be that homosexuals have become the target of a Christian political agenda rather than one part of an ongoing conversation about what God intends for us in covenant marriage relationships?

Many churches speak about homosexuality in terms of sin and judgment but about divorce in terms of forgiveness and grace. When a same-sex couple goes down to the courthouse to petition for a marriage certificate, the Christians show up with sandwich boards. Do they also show up when their congregants go to the same courthouse to petition for an “unbiblical divorce”? Likely not. And the hypocrisy on this issue has not escaped the next generation.

Different Categories. Many in the last generation see the morality and legality of these issues as inseparably linked. The Huffington Post recently published a picture of a man holding a sign that read, “A moral wrong can’t be a civil right.” Because gay marriage is immoral, the logic goes, then it should be illegal. But many younger Christians now believe they can hold to an orthodox view of sexuality without necessarily opposing same-sex unions. I suspect many young Christians think much like Christian author Frederica Mathewes-Green, who wrote the following in Gender: Men, Women, Sex and Feminism:

"I can believe that my gay friends are engaging in something spiritually damaging, without asking the law to stop them. They can perceive that my convictions are grounded in an ancient spiritual consensus, not hate. We still won’t agree. But perhaps we can understand each other, and continue the conversation with mutual respect."

There is little doubt that a significant number of young people confront this issue with respectful dialogue rather than angry argument. But the question remains whether or not they will, like Mathewes-Green, be able to do so while holding onto the ancient spiritual consensus on human sexuality. Regardless, it seems the next generation will begin framing the debate differently with separate moral and legal categories as they rise into positions of ecclesial and political leadership.

So where do we stand? And, more importantly, where should we stand?

I think it is helpful to begin by recognizing that all major religions in every society for thousands of years have held to a traditional position on both sexuality and marriage. Additionally, our scriptures speak much about God’s intentions for sexuality. While we must address and correct our failures in this arena as a faith community, we should also be reticent to disregard this ancient wisdom simply because the debate has soured in our churches and culture.

Our generation will play a role in shaping the sexuality debate in the next 20 or more years, no matter how Proposition 8 turns out. Our responsibility is great. May we be careful, prayerful and thoughtful. And may our response to our gay and lesbian neighbors please the One who created us all.

Jonathan Merritt is author of Green Like God: Unlocking the Divine Plan for Our Planet (2010) and a regular contributor to RELEVANT. His writing has been featured in outlets such as USA Today, Beliefnet, and CNN.com, and he blogs at www.jonathanmerritt.com.