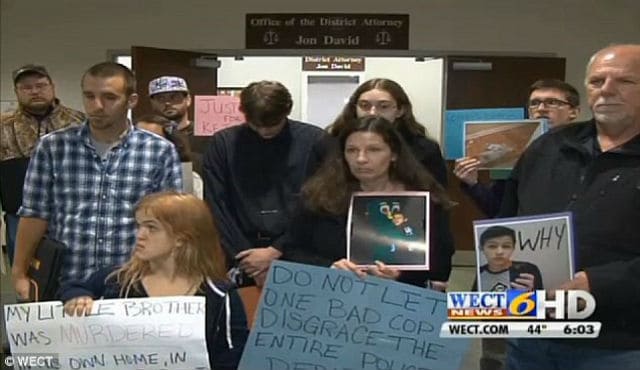 Questions are swirling around Boiling Springs, North Carolina today, following a very sad incident in which a police officer fatally shot Keith Vidal—an 18-year-old with a history of schizophrenia—moments after arriving on the scene. According to Keith’s parents, he was having a schizophrenic episode and they were concerned he would hurt himself with a small screwdriver he was carrying. They called the police for help, and when two officers showed up, they confronted and subdued Keith in the hallway, repeatedly radioing in to report that the situation was under control.

Fourteen minutes later, another officer arrived on the scene and 70 seconds after arriving, called into report that he had fatally shot Keith in self defense. Just what kind of danger he was in when the 90 lb. Keith had already been tasered and pinned down by two policemen in the hallway is not apparent. According to Keith’s father, Mark, the officer had said, “We don’t have time for this,” right before firing his gun between the two officers holding Keith down, killing him. “There was no reason to shoot this kid,” Keith’s father said. “They killed my son in cold blood. We called for help and they killed my son.”

“Where is the justice, why did they shoot my son?,” Keith’s mother asked. “This is what’s wrong with our mental health system” …

Update: While not going into any details, Police Chief Brad Shirley says his department has conducted an internal review and cleared all the officers of wrongdoing. Keith’s family has hired a team of lawyers to investigate what they’re calling “a cover-up.”